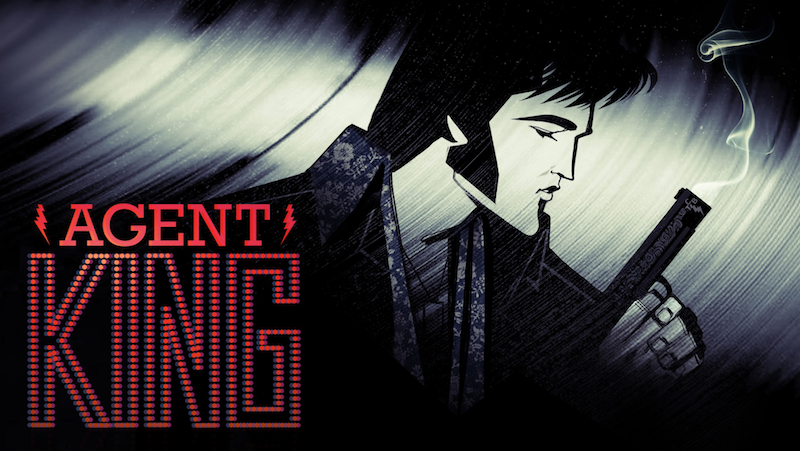 Nearly 50 years ago, Elvis Presley infamously met with Richard Nixon in the Oval Office to ask the President to make him an undercover operative for the Bureau of Narcotics and Dangerous Drugs. Five decades later, he’ll finally become the spy he always dreamed of being in the new Netflix animated series Agent King.

Announced on the 42nd anniversary of Elvis’ death, the “adult animated action comedy series” comes from Sony Pictures Animation. A press release describes Agent King as seeing Elvis trading “in his white jumpsuit for a jet pack when he is covertly inducted into a secret government spy program to help battle the dark forces that threaten the country he loves — all while holding down his day job as the King of Rock and Roll.”

(Again, this was announced on the anniversary of the legendary performer’s death…)

Elvis’ ex-wife, Priscilla Presley, co-created Agent King alongside John Eddie, with both serving as executive producers. Mike Arnold of Archer fame will serve as showrunner, writer, and executive producer. Elvis’ longtime friend and member of his Memphis Mafia entourage Jerry Schilling is consulting on the project. What’s more, designer John Varvatos will be behind all the costume designs for Elvis’ spy wardrobe.

Said Priscilla of the cartoon,

“From the time Elvis was a young boy he always dreamed of being the superhero fighting crime and saving the world! Agent King lets him do just that. My co-creator John Eddie and I are so excited to be working with Netflix and Sony Animation on this amazing project and getting the chance to show the world an Elvis they haven’t seen before.”

There’s no word yet on how many episodes the first season of Agent King will receive or when it will premiere. We’ll see if it’s around the same time as Baz Luhrmann’s upcoming Elvis biopic, which stars Austin Butler as the King and Tom Hanks as his manager, Col. Tom Parker.