Film Review: Blinded by the Light Is a Giddy Celebration of Love, Youth, and Bruce Springsteen 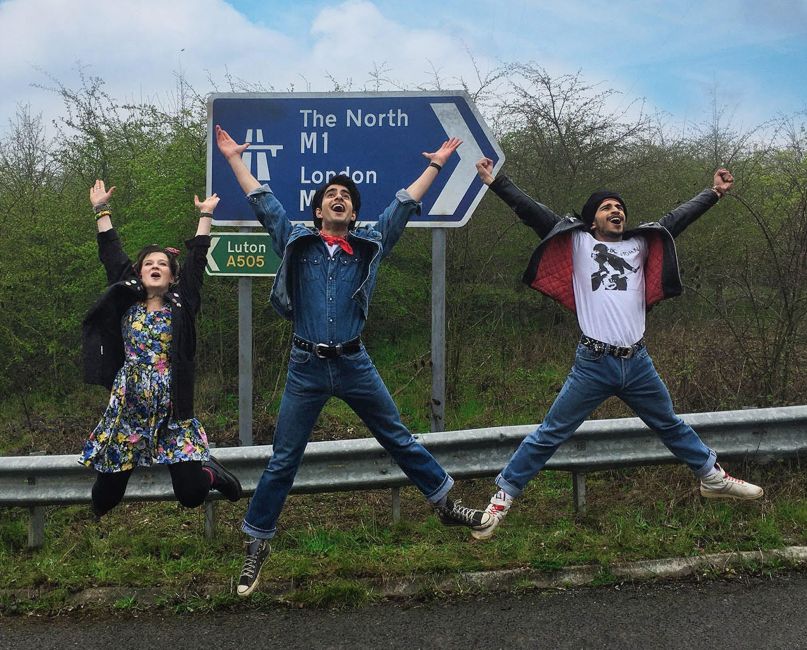 The following review was originally published as part of our coverage of the 2019 Chicago Critics Film Festival.

The Pitch: England, 1987. New Wave is king, and Margaret Thatcher presides over a Britain beset with economic troubles and the rise of the neo-Nazi National Front. In the drab borough of Luton in Bedfordshire, a Pakistani family is trying to get by and make ends meet amid the chaos — which gets especially difficult after patriarch Malik (Kulvinder Ghir) loses his job. But Javed (Viveik Kalra), the Khans’ bookish only son, wants more for himself, yearning to become a writer despite the traditional expectations of his parents and the prejudice he faces from the outside world.

Salvation comes by way of two dusty cassette tapes, when Roops (Aaron Phagura), the only Sikh boy at his school, introduces him to the music of the one and only Bruce Springsteen. The other kids think he’s passé — Javed’s lifelong friend Matt (Dean-Charles Chapman) asserts that “synths are the future” — but the Boss’ powerful ballads speak to Javed’s experience on a fundamental, personal level. Activated by Springsteen’s music, Javed finds a voice he never knew he had, giving him the courage to follow his dreams, find love, and assert himself against family traditions that emphasize obligation over individuality. But as Javed learns quickly enough, it’s one thing to dance in the dark; it’s quite another to break the ties that bind.

Bend It Like Bruce: Based on the life of English journalist Sarfraz Manzoor, the son of Pakistani immigrants to England — and who loves Springsteen enough to have seen him 150 times in concert — Blinded By the Light has a great deal of cultural ground to navigate. There’s the anxiety of Thatcher-era conservatism and white nationalism raging across England in the ’80s, the subsequent economic recession that followed, the generational divide between first- and second-generation Pakistani immigrants, and the everyday struggles of finding yourself in the throes of teenhood, just to start.

Thankfully, as director Gurinder Chadha demonstrated with Bend It Like Beckham, she knows how to effortlessly thread the stresses of clashing cultures with bright, accessible comedy. The fussy, controlling parent has been mined for laughs in many movies about the immigrant experience, but Ghir’s performance is as open and vulnerable as it is dryly amusing. As Javed, meanwhile, Kalra is a thrilling discovery, with his wide-eyed expressiveness and unexpected layers of emotional vulnerability lending a great deal to the mood. The entire movie rests like a boulder on his shoulders, and he carries that weight with considerable maturity – one hopes this is just the beginning of a considerable career.

The rest of Javed’s family and friends are drawn with lovely, empathetic strokes as well — mother Noor (Meera Ganatra) is a beacon of Earthly patience, while older sister Shazia (Nikita Mehta) is the similarly-Anglicized sibling who gives Javed some much-needed perspective about how to look out for his own. Supporting turns from Rob Brydon (as Matt’s Bruce-fan father) and Hayley Atwell (as a well-meaning English teacher whose early advocacy for Javed’s writing conveniently drives much of the plot) also make room for Javed’s inspiration to grow. Frustrating, however, is the way in which Roops gets the least to do as a character, essentially serving as Javed’s conduit to the world of Springsteen. Apart from a few scenes where they face the prejudice of racists together, Javed and Roops’ friendship beyond their single shared interest (and their solidarity as the only two brown kids at school) goes largely unexplored.

Spring Street: It’s Javed’s deep, abiding love for Springsteen that drives much of Blinded by the Light‘s universal charm. In much the same way as John Carney’s brilliant Sing Street, Blinded tells the story of a beleaguered kid in ’80s Europe finding his voice through music, and the music in question is (often literally) slapped across the frame. Snippets of Bruce’s lyrics pop up next to Javed’s head as he latches onto them, connecting them to his own working-class existence. Before long he’s wallpapered his room with Springsteen posters, traded his garish sweaters for sleeveless red flannel and a Canadian tuxedo, and squirreling away money to see him in concert the first chance he gets. It’s hard to think of a film that more unabashedly visualizes the shirt-tearing catharsis of finding art that connects with you on that level no one else understands, at the right young age.

At times, Blinded by the Light threatens to become a full-on musical through its protagonist’s sheer force of will. Javed thrashes about in a thunderstorm to “The Promised Land” while the lyrics project onto neighbors’ houses, and he offers love interest Eliza (Nell Williams) an impromptu serenade of “Thunder Road” so powerful that the thrift store shoppers around him join right in. Javed and friends sneak into the school’s radio station to play “Born to Run,” the sound practically spreading outside the schoolyard fence to the rest of Luton itself. It’s these grandiose, Bollywood-esque touches that make Chadha’s joyful approach so incredibly appealing.

The Verdict: It’s tempting to ding Blinded by the Light for being too syrupy, too earnest, or a cornball love letter to the Boss packed with saccharine messages about being yourself and dancing like no one’s watching. But Javed’s experiences with Bruce Springsteen are so inexorably woven into the fabric of adolescence that it’s almost impossible not to relate to the teenage impulse to shout the lyrics of your favorite musicians from the rooftops. After all, you can’t start a fire without a spark.

Chadha’s film is not for the cynical; it’s too unapologetically sincere for that. But as a crowd-pleasing, emotionally gripping joyride about the ways in which music can change our lives, it’s one to see, and more than once.

Where’s It Playing?: Blinded by the Light is making the festival rounds, before hitting the backstreets of theaters everywhere August 14th.