The Cure, Robyn, and Tame Impala convened at one of the world's first carbon-neutral fests 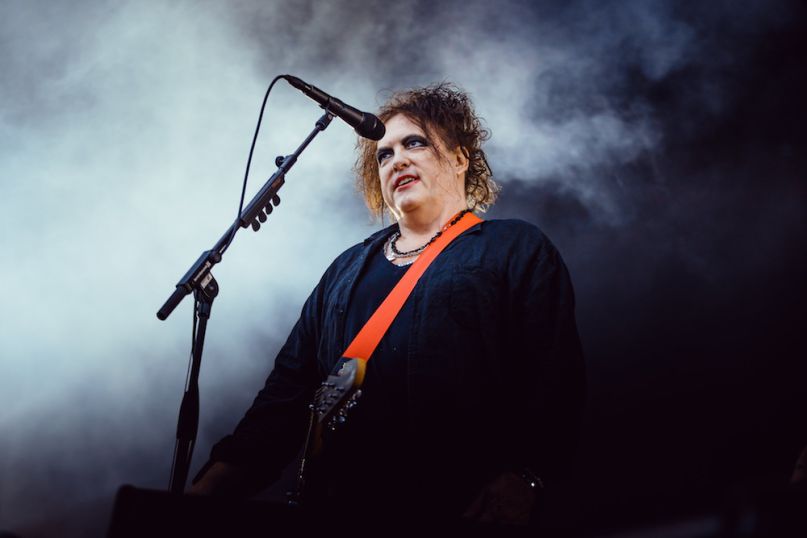 Helsinki, the capital of Finland with a population of about 650,000, exists in the intersection between urbanism and nature, the past and future, the classic and novel. Its annual flagship music event, Flow Festival, follows suit, mirroring the city and its people in more ways than one. You could say that to know Flow is to know all the best aspects of Helsinki’s burgeoning arts and culture scene.

Now in its 15th year, Flow once again took place at Suvilahti, a sprawling property that once served as a power plant. Its site already makes the event a rare gem: Unlike many major festivals that take place miles out in the middle of nowhere, Flow is quite literally a part of Helsinki, located just a mere 15 minutes from the city center.

As such, there’s a noticeable emphasis on reflecting the values and interests of residents and surrounding businesses. Like the community it serves (at least 60% of attendees are locals), Flow prides itself on being one of the world’s first carbon-neutral festivals.

A commitment to sustainability permeated nearly every aspect of the festival. Over 170 acts, including The Cure, Robyn, Solange, and Tame Impala, played amid the repurposed Suvilahti area — still gritty and industrial, but also revitalized with colorful murals, installations, and the works of local artists. Meanwhile, Flow’s tasty food options boasted not only organic, locally produced fare, but all 65 food and drink stalls often had numerous sustainable vegetarian and vegan meals.

And it goes beyond being “cool”; this is actually what the people want. For example, the stall for Bun2Bun, a premier vegan burger eatery in Helsinki, consistently had one of the longest queues all weekend (as a lifelong carnivore, the Double Cheese more than had me fooled). Another major environmentally-minded campaign, spearheaded by Flow partner Reaktor, promised to plant one tree for every beverage container donated.

Of course, Flow’s main attraction was its stellar lineup, its running order mindfully curated for the mindful festivalgoer. Diversity being a major point, Flow booked a solid balance of male and female acts (again a rarity) as well as artists of various racial backgrounds and sexual orientations. Some hailed from Australia and Japan, others from the US and all across Europe.

Many established music icons like The Cure, Stereolab, and Erykah Badu were present, playing alongside newcomers such as rapper Slowthai and Finnish favorite Alma. Friday evening saw Solange’s sophisticated R&B followed by the experimental footwork of producer Jlin while Saturday brought everything from Robyn and Tame Impala to Yves Tumor and The Black Madonna. On the final day, James Blake’s British electro crooning shared a Sunday roster with Mitski’s powerful indie rock musings and a booming set from Russian techno/house producer Nina Kraviz.

There is a handful of angles to view Flow and the groundbreaking way it approaches putting together a festival. The most fun way? All of us in attendance — that’s 52,000 unique visitors — partied to preserve Finland, the Land of a Thousand Lakes. Partied to, in some small way, preserve the planet.

Click ahead for some special standout sets from the three-day event, as spelled out by the word Flow itself.

FOR a masterclass lesson on how to be top-tier, festival headliner material: Look no further than The Cure, Robyn, and Solange.

The Cure powered through a setlist more than two hours long and stuffed with 27 songs, including favorites like “Pictures of You”, “Just Like Heaven”, “Friday I’m in Love”, and set closer “Boys Don’t Cry”. Whether you were a new fan to their catalog or a decades-long diehard, Robert Smith & co. sounded pristine and tight, veteran in the experienced sense, but still very much fired up and present in the moment. It probably goes without saying that The Cure are legends, but to see an act of such status still play with that much fervor and connectedness is a true gift. As the sun began to set — in Helsinki, it’s still quite bright at 9 p.m. — Smith especially seemed rather moved by the whole thing.

Consequence of Sound has covered live Robyn shows multiple times, and the takeaway is usually something along the lines of “She was incredible.” After hearing that for so long, I couldn’t help but go into her performance with a hint of skepticism — she couldn’t possibly be on-point every time. Leave it to the Swedish pop phenom to prove me so, so wrong. Robyn performed with the energy and sincerity of someone taking the stage for the very first time. Fame wasn’t lost on her, even in the least bit, as every Honey hit and Body Talk banger was served up with that same magnetic emotionality that’s made Robyn one of the best pop artists of our time. When the entire Lapin Kulta Red Arena sang the “Dancing on My Own” chorus a cappella back to Robyn, it looked as though she was on the verge of tears. She felt us in the deep way we’ve always felt her, and in that instance in particular, it was like all the thousands of us, including Robyn, were one big singular heart.

Solange already has one of our favorite albums of the year in When I Get Home, but experiencing it live is another spectacle all its own. Her unique artistry and vision lived in the many details of the set — from the sole dancer twerking at the top of a white staircase to the selected spoken word moments (“Do nothing without intention,” she advised, a line lifted from her similarly titled interlude track. Power, specifically black female power and the embracing and owning of it, shined through, but also in such a way that it didn’t feel exclusive. Many times throughout the set, things felt intimate, like we’d been invited to join or sit in on a conversation.

LEANING into the heat: In their own ways, Tove Lo, Alma, Pond, Nina Kraviz, and Fred P contributed to the diverse spark of Flow’s lineup.

Whether it was her roots in neighboring Sweden or her knack for nailing the art of the pop song, Tove Lo drew in a massive audience at the Red Arena. People congregated along the fringes of the venue, hoping to catch just a glimpse of the Stockholm-born musician. The frenzied fandom in Scandinavia is very real, and it feels like Tove Lo is so close — maybe just one hit song away — to replicating that over in the US. I think we’re finally ready for her big break.

Finnish favorite and relative newcomer Alma, who has a tone similar to Sia or Adele, is also steadily making her way to the top. The 23-year-old pop singer has already teamed with bigger artists like Charli XCX and Tove Lo (the two performed together on Sunday), but solo singles such as the anthemic “Lonely Night” easily speak for themselves and practically scream “mainstream appeal.” Alma also earned some bonus points for highlighting the significance of mental health during her set.

Casting swirls of psychedelic rock, Pond entranced those at the SEAT Black Tent. The venue was filled with winding, simmering guitar solos from this year’s Tasmania, and there were numerous occasions in which it felt like we were caught up in Pond’s spacey world rather than rocking away at a Nordic music festival.

OH my, ya just had to see it to believe it: Erykah Badu, James Blake, Slowthai, and Jlin turned in visceral sets, the kind that stick with you for weeks to come.

Though she appeared onstage late and submitted a shorter than expected performance, when Erykah Badu was on, she was really on. Bottle caps all over her hair and tassels hanging from her flowing dress, she invited us into a spiritual experience through songs like “Next Lifetime” and brief but rousing mini speeches. “We just transcended race, gender, religion, political states, sexual orientation, genealogy, molecular and cellular energy,” she said at one point. “We become one, we the same things.”

As for James Blake, his late-night delivery featured vulnerable whispers, throwback classics, and rap-informed Assume Form bops. What we in the crowd didn’t see coming — like at all — was five or so minutes dedicated to seemingly improvised electronic arrangements. Think thudding bass and some of the most propulsive, dance floor-prepped stuff to come from Blake’s fingertips. Makes me wonder if I’ve been missing out on some tremendous material by skipping his live DJ sets.

One of the biggest artists of 2019, British rapper Slowthai had the entire Black Tent absolutely mesmerized early Friday. Between his swaggering, high-energy presence on stage (yes, even while just in underwear) and constant engagement with the crowd (he kept pushing for a gigantic mosh pit and “Michael Phelps-like” stage diving), Slowthai served up easily one of the most memorable sets of the entire festival. Nothing Great About Britain? I’d beg to differ.

Indiana-bred producer Jlin gained major attention with 2018’s Black Origami, an album that earned her comparisons to masterminds like Aphex Twin. Her genius was on full display at Flow’s The Other Sound stage, her jerky, twisted, and bent experimental electronics shrouded in gigantic plumes of smoke. It didn’t just feel like a hazy underground club, it was like another reality entirely.

WE never doubted you for a second: Veteran festival acts Tame Impala and Blood Orange offered up the expected, but it wasn’t anything less than terrific.

Aussie staples Tame Impala did their psychedelic pop thing, entrancing the ever-growing audience with Currents favorites as well as newer singles like “Borderline” and “Patience”. Every moment felt big, as though everyone was holding their breaths, which is a testament to the staying power of a band that’s been out of the limelight for some years. They’re definitely back.

The same could be said for Blood Orange, who rocked sleek R&B vocals in addition to actual funky guitar solos all in the name of Negro Swan. He was also joined by Ian Isiah on a number of performances.