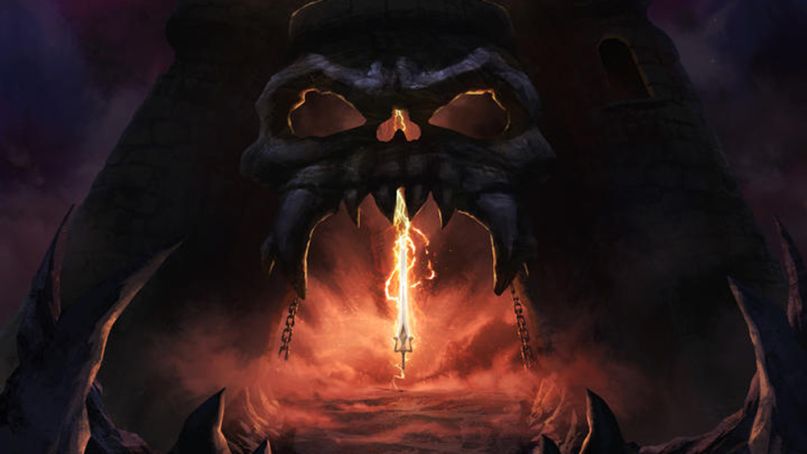 Masters of the Universe: Revelation, graphic courtesy of Netflix

Kevin Smith announced he’s working on a new anime He-Man series for Netflix. The ’80s-indebted show will be called Masters of the Universe: Revelation.

The Jay and Silent Bob Reboot director broke the news over the weekend during the Power-Con convention. It turns out Masters of the Universe: Revelation will play into the He-Man nostalgia by existing in the Mattel toy world and exploring some of the unresolved plots from the original animated show, which ran for two seasons from 1983 to 1985. Smith will serve as a showrunner and as the executive producer.

“I’m Eternia-ly grateful to Mattel TV and Netflix for entrusting me with not only the secrets of Grayskull, but also their entire Universe,” said Smith, reports Variety. “In Revelation, we pick up right where the classic era left off to tell an epic tale of what may be the final battle between He-Man and Skeletor! Brought to life with the most metal character designs Powerhouse Animation can contain in the frame, this is the Masters of the Universe story you always wanted to see as a kid!”

Mattel Television is producing along with Rob David, the vice president of Mattel TV and author of He-Man: the Eternity War. A handful of writers are on board to continue the story, including Eric Carrasco (Supergirl), Tim Sheridan (Reign of the Supermen), Diya Mishra (Magic the Gathering), and Marc Bernardin (Alphas). All of the show’s animation will be overseen by Powerhouse Animation.

“Masters of the Universe has been a cultural phenomenon for generations, inspiring fans to discover their own power within,” adds Rob David. “Fans of this franchise have been waiting for the continuation of these characters, and Kevin Smith, as a Masters superfan himself, is the perfect champion and partner to expand the canon through a dynamic animated series on Netflix.”

Between this news and the upcoming Magic: The Gathering animated show in the works, it looks like Netflix and chill is going to get a whole lot nerdier.

Previous Story
Top Song of the Week: Big Thief Steal Our Hearts with “Not”
Next Story
CupcakKe announces “The 10k Tour”, will give away $10,000 to lucky fan each night
Popular
More Stories
[fu-upload-form form_layout="media" title="Submit Your Photo"][input type="hidden" name="ugc" value="1"][/fu-upload-form]