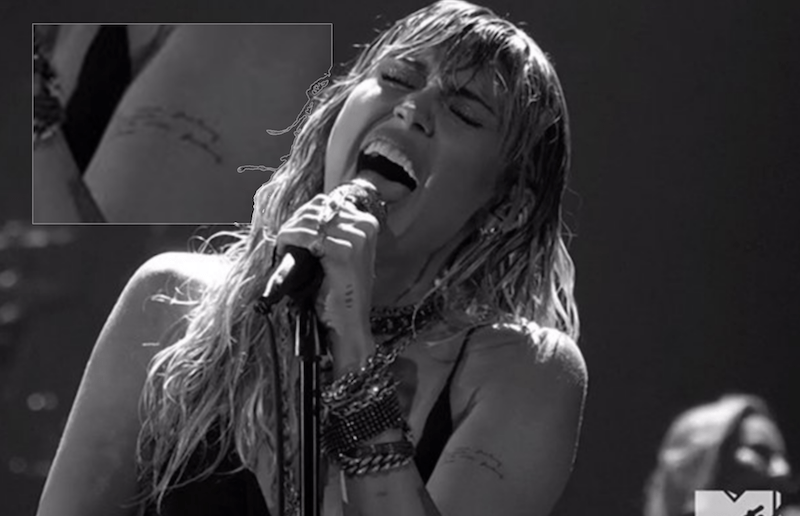 Some people deal with a separation by finding a new beau, or writing some poetry, or maybe even a getting a new tattoo. Miley Cyrus has hit the trifecta. In the weeks since splitting with Liam Hemsworth, Cyrus has been canoodling with Kaitlynn Carter and dropped the sincerely good breakup track “Slide Away”. While performing the song at last night’s MTV VMAs, she unveiled some fresh ink that also seems to be inspired by her pending divorce — and it comes from an obscure Pixies B-side.

The pop star kept her left hand gripping the microphone during the VMAs performance, giving a clear view of a new block of words on her bicep. According to People, the work was done by celebrity tattoo artist Winter Stone and features lines from Pixies’ “The Thing”: “My head was feeling scared, but my heart was feeling free.”

“The Thing” originally appeared as a B-side to Pixies’ 1990 single “Velouria” off of Bossanova, and its lyrics were reused for that album’s “The Happening”. It later was included on the 2001 Complete B Sides compilation. Lord knows when Miley Cyrus came upon it, but if her association with The Flaming Lips didn’t tip you off that she has some varied music tastes, she’s now made it permanently clear.

Watch Miley Cyrus’ “Slide Away” performance below to peep the Pixies tattoo, after which you can take a listen to “The Thing”.

Previous Story
Disney+ will release new TV episodes on weekly basis, and not all at once
Next Story
Meek Mill is officially off probation
Popular
More Stories
[fu-upload-form form_layout="media" title="Submit Your Photo"][input type="hidden" name="ugc" value="1"][/fu-upload-form]