Mystery Men, The Boys, and the Uncomfortable Truths of Misanthropic Superheroes

Twenty years later, superhero movies are coming right back around to Captain Amazing 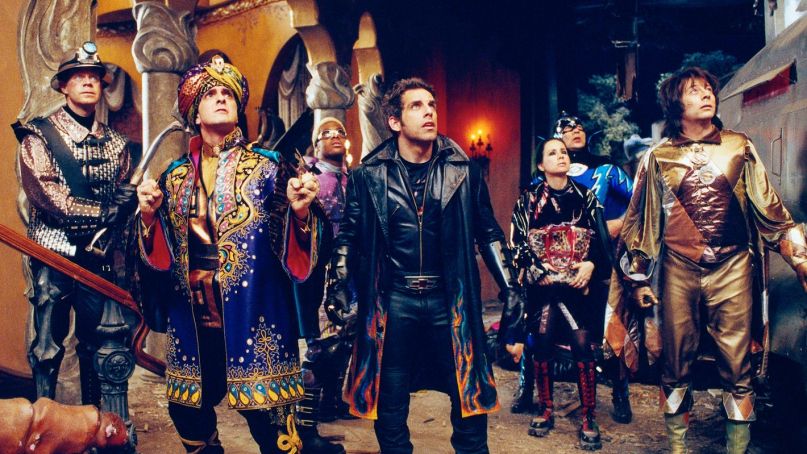 There’s a scene in The Boys, Amazon’s latest streaming series that pokes at the sacred cows of the superhero mythos, that boils the blood in the most harrowing way. A plane is hijacked by terrorists with box-cutters; luckily, since this show exists in a world with superheroes, the day is effortlessly saved by the smirking Sgt. Homelander (Antony Starr), a square-jawed Superman type, with Wonder Woman-like warrior Queen Maeve (Dominique McElligott) in tow. It’s a scene of the kind we could have imagined immediately after 9/11: a daydreamed desire for someone, anyone, to save those poor people.

And yet, the rug is pulled out from under The Boys‘ audience, as Homelander’s careless use of his heat vision destroys the plane’s controls, sending it hurtling slowly but surely to the ground. Maeve hypothesizes various ways to use their superpowers to save them, but it won’t be enough, not for all of them. “We’re done here,” he says coldly, before exiting the plane to the horrified screams of the passengers, who’ve just seen that their savior has deemed them unworthy of living. He couldn’t save even one of them, no matter how much a conflicted Maeve pleads; that would let slip that he was willing to let all of them die in the first place.

Shaky as the series as a whole may have been, this scene and everything surrounding the super-powered sociopathy of Homelander and the rest of the Seven serves as The Boys‘ most interesting thematic canvas. Set in a world in which superheroes not only exist, but they’re corporatized and turned into brand-conscious celebrities, this adaptation of the Garth Ennis graphic novel is but the latest in a chain of media that looks askance at the presumed virtues of caped crusaders. Homelander and the rest of the Seven are more concerned with defending their reputations than Truth, Justice, and the American Way. If power corrupts, then superpowers corrupt superbly.

It’s hard not to watch Homelander in The Boys, with his padded, focus-tested muscle suit and lantern-jawed smarminess, and not think of another sniveling critique of Superman: Greg Kinnear as Captain Amazing in 1998’s Mystery Men. Like The Boys, Mystery Men is a flawed-but-charming interrogation of the failed morality of big-time superheroes: his costume is emblazoned with corporate sponsorships, looking more like a NASCAR jumpsuit than a crime-fighting ensemble. What’s more, he puts the city in danger after breaking his arch-nemesis Casanova Frankenstein (Geoffrey Rush) out of the asylum just to keep his brand afloat. It’s all a game to him, and the citizens of Champion City are just the pawns. Who cares if it puts the city in danger? Think of the ratings!

Granted, Captain Amazing’s Achilles heel is that he’s a buffoon, a short-sighted egotist — a far cry from Homelander’s naked sociopathy and alpha-male domination of every room he encounters. Played with smarmy calculation by Starr, Homelander is basically Patrick Bateman with a cape (well, the one that’s not Nolan’s Batman). He’s an image-obsessed narcissist who crafts a wholesome, Smallville-esque Middle America upbringing from whole cloth just to hide his true nature as an experiment grown in a lab. His wholesomeness is a performance for the people, and it’s in private that his passive-aggressive nature comes out. As The Boys continues, his childlike desire to control his own personal world becomes clearer, Homelander playing the all-American ideal as a smokescreen for his more selfish impulses.

This kind of deconstruction of the superhero mythos is nothing new: as long as we’ve had caped crusaders and Men of Steel, we’ve thought long and hard about what would happen when people with extraordinary abilities held themselves above the people under their charge. Alan Moore’s Watchmen, ever the magnum opus for this kind of costumed self-critique, features that oft-repeated quote from mentally-unhinged Rorschach: “all the whores and politicians will look up and shout “Save us!”… and I’ll look down and whisper ‘No.'”

But the Batman-type is always easier to dismiss as a kook — an ordinary man driven to extrajudicial crimefighting by ego, money, or trauma. It’s Superman, with his godlike powers and unflinching moral certitude, that we should be worried about.

Flawed as they may be, the Zack Snyder DCEU films came close to presenting and interrogating this version of Superman. Their Clark Kent is far from a Boy Scout; he’s brooding, conflicted, a boy not quite able to reconcile his powers with the kind of man he wants to be. He struggles against the symbolic value people place on him; some of the most powerful images in Batman v. Superman (Snyder being a stellar purveyor of singular images, if nothing else) involve him saving the day to his great chagrin. He’ll do the right thing, but it’s not a job he’s thrilled about. Other takes on the Superman story tread even darker waters: take Brightburn earlier this year, which revised the Superman story into one where a teenage Clark Kent sees his abilities as a way to fulfill his violent impulses by force. In one context, his presence is comforting; in another, apocalyptic.

It’s tempting to write off The Boys, Watchmen, and the rest of the misanthropic superhero critiques peppered throughout pop culture as the stuff of angsty fanboys who need their capes to be dark and gritty to justify liking them. But we live in an age where Marvel is king, and the entire movie industry has bent to the will of shared universes and blockbuster tentpoles We already worship at the altar of heroes who, while flawed, always have the public’s best interests at heart. At worst, they’re a little snarky and self-destructive, but they’d rather die than sacrifice innocents. (Hell, Iron Man 3 already showed us how a flying superhero would save a crashing plane full of people. Homelander just couldn’t be bothered.) Take that innate altruism away, and these heroes become far more dangerous — and, most uncomfortably, a realistic reflection of what we might do with those same gifts.