Donald Trump and the “Squad” face off in The Simpsons’ West Side Story parody: Watch 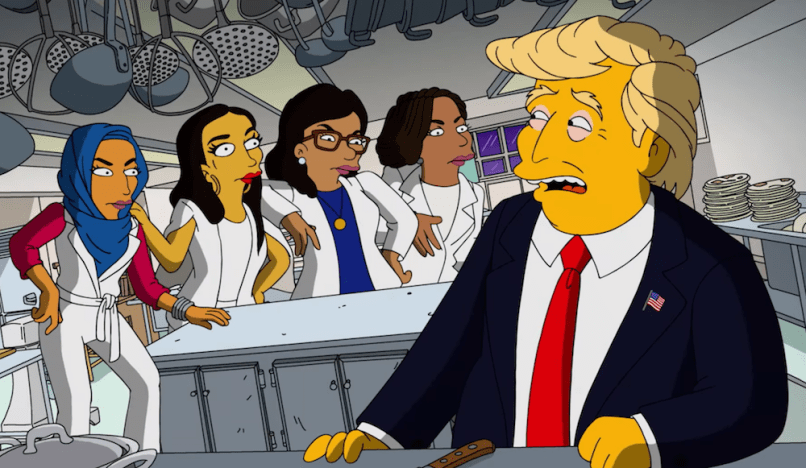 With the 2020 Elections looming, Donald Trump is the focus of a new parody scene on The Simpsons. The sketch sees POTUS facing off against the four Democratic progressives that make up the “Squad” — Alexandria Ocasio-Cortez, Rashida Tlaib, Ilhan Omar, and Ayanna Pressley.

A spoof on West Side Story, the 90-second parody is dubbed “West Wing Story”. It’s built around a reworked version of the famed musical’s “America” song, as sung by Trump and the “Squad” as they chase one another throughout the White House.

(Read: The Top 10 Songs from The Simpsons)

During his part, the Cheeto-in-Chief praises himself (of course) while tearing down AOC and her fellow politicians in his typically xenophobic and selfish way. “They shouldn’t be in America/ No one but me America/ No taxes for me in America/ This is my natural hair-ica!”

AOC & co. waste no time hurling their own comebacks, however, which includes a diss about Trump and Putin’s suspicious ties. “You’re Boris Johnson without the class/ Can’t wait to see you behind prison glass/ Your nose is right up Putin’s ass/ We say it’s time to impeach you fast.” Later, the Squad is joined by the many Democratic contenders for president in 2020.

Trump hardly needs any help embarrassing himself, but it’s good to see The Simpsons setting aside some airtime to roast the president.

Watch it for yourself below.

Season 31 of The Simpsons premieres September 29th on Fox.