The Dark Crystal: Everything You Need to Know Before Netflix’s Age of Resistance

From Aughra to the podlings, a nifty guide to take with you around Thra 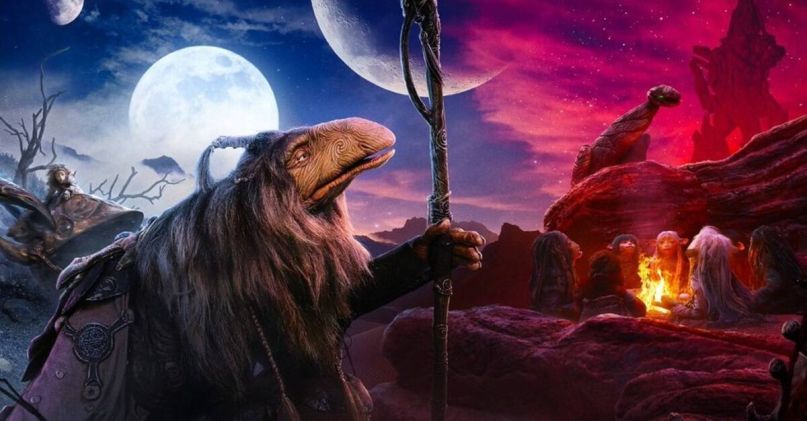 In an age where everything’s getting a reboot, you’d be forgiven for being a little cynical about The Dark Crystal: Age of Resistance. Breathe easy, though, young Gelfling: not only is Age of Resistance a strong, satisfying fantasy epic in its own right (with more star power and personality than the original 1982 film), it sees the much-welcome return of The Jim Henson Company’s complex, intricate Muppetry.

Given that this is a season-long prequel to an obscure Jim Henson fantasy film from the early ‘80s, you’d be forgiven for not knowing (or remembering) a lot of the original Dark Crystal leading up to the release of Age of Resistance. Ask any rando on the street about The Dark Crystal, and the most they could likely muster is “There’s giant vulture Muppets in it, I think” and/or “Is that the one with David Bowie?”

While you can watch the original The Dark Crystal on Netflix before the new series comes out, Consequence of Sound decided to throw together a nifty guide for you on everything you need to know before you watch Age of Resistance. After all, the entire series takes place “many years” before the movie, so in many ways, this is the beginning of the story of the fantastical inhabitants of Thra.

Speaking of Thra, that’s the name of the alien world on which the Dark Crystal saga is set — a planet surrounded by three suns, creating a vibrant, forested landscape filled with verdant trees and dense foliage. In the era of the film, the environment of Thra is rundown, damaged by a thousand years of Skeksis rule; dark swamps and caves are far more prevalent.

At the source of Thra’s power and all its natural life lies the Great Crystal, which connects all the creatures of Thra. In the hands of the Skeksis, though, the crystal’s power has grown dark (get it?), and a large crack in the crystal potently symbolizes the fractured, imbalanced society they rule.

The most gentle and idealistic species on Thra, the Gelfling are the closest thing The Dark Crystal has to humanoid characters. Elfen beings with large eyes, pointed ears and subtly feline features, the Gelfling live harmoniously with nature, but their gentility can quickly give way to incredible bravery when the time comes. They also have the ability to “dreamfast,” or share memories through touch; female Gelflings also have fairy-like wings they can use to fly or glide down from a height.

Now, in The Dark Crystal, we only really see two Gelfling — heroes Jen and Kira — the last of their kind after the Skeksis have wiped them out. But in Age of Resistance, we see masses of Gelfling at the height of their culture (inasmuch as it exists while suffering under the thumb of the Skeksis). Here, the Gelfling are divided into seven clans: the cultured aristocratic Vapra, the fierce warriors of Stonewood, the subterranean Grotten, and so on. (One Gelfling from each of the aforementioned houses make up the heroes we follow during Age of Resistance — Taron Egerton’s Stonewood guard Rian, Anya Taylor-Joy’s intellectual Vapra Brea, and Nathalie Emmanuel’s Grottan idealist Deet.)

But what would a Dark Crystal adaptation be without one of Jim Henson’s most well-known creations, the Skeksis? Vulture-like creatures with leathery skin and flapping tongues, the Skeksis come from another world after the “Great Conjunction” a thousand years prior, to seek the life-giving properties of the Crystal. Having manipulated their way into ownership of the world, they experiment with the Crystal’s energies to greedily stave off death, and subjugate the peoples of Thra (especially the Gelfling) to do so.

While we’re getting all-new Gelfling characters for Age of Resistance, a lot of familiar beaks show up in the Netflix prequel series. The Emperor (Jason Isaacs), seen dying in the opening minutes of the original movie nearly 30 years (sorry, trines) ago, is alive and well; the scheming Chamberlain (Simon Pegg) is still in the good graces of the other Skeksis, and the General (Benedict Wong) hasn’t yet manipulated his way into becoming Emperor yet. Mark Hamill, Awkwafina, Keegan-Michael Key, and others reprise the roles of the other major Skeksis from the original film.

Age of Resistance puts a greater focus into how Skeksis society operated before the genocide of the Gelfling, which explains the outpouring of talent.

Another fan-favorite from the original Dark Crystal comes back in a major way in Age of Resistance: Aughra, the wise, elderly creature who represents the will and spirit of Thra. Ostensibly the planet’s protector, she was lured to study the stars by the Skeksis, who built her an intricate orrery to distract her while they seized control of the planet. With her gruff demeanor, wrinkled appearance, and circular logic, Aughra basically feels like Yoda’s cranky grandma.

Luckily, Age of Resistance sees Aughra waking up from generations of slumber to finally tackle the problem of the Skeksis; in the original film, she was puppeteered by Frank Oz and voiced by the late, great Billie Whitelaw (aka Mrs. Maylock from The Omen); in the Netflix series, puppeteer Donna Mitchell pulls double duty as voice and puppeteer for Aughra.

Living in the periphery of the Gelfling-Skeksis conflict are the Podlings, modest, agrarian creatures that serve as Thra’s closest analogue to the Hobbits. They’re short, they drink, they speak in gobbledygook, and they’re just so damn cute.

In the original Dark Crystal, they mostly served as a cute menial race for the Masters (more on them later) and as comic relief. In Age of Resistance, however, they play a bigger role in the epic proceedings; in fact, one of the series’ main characters is Hup (voiced and puppeteered by longtime Muppeteer Victor Yerrid), a Podling with aspirations to become a Paladin, who joins Deet on her quest to warn the peoples of Thra about her apocalyptic visions about the Skeksis and the Crystal.

Of course, there are a half-dozen or more new creatures and races filling out the lush, practically-built world of Thra for The Dark Crystal: Age of Resistance, but plenty of old favorites crop up along the way. The Masters (or urRu), the shadowy brother race to the Skeksis who also arrived on the planet in the Great Conjunction, are a bit more absent, but Lady Dynamite’s Ólafur Darri Ólafsson shows up to voice urVa the Archer, one of Aughra’s most trusted confidants.

You can count on seeing plenty of fizzgigs (big puppy-dog balls of fur with rows of nasty teeht) and landstriders (long, hairy quadrupeds who serve as the Gelflings’ regular mount) in the series, though they don’t play the prominent roles here that they did in the original Dark Crystal. The Garthrim — the Skeksis’ crustacean soldiers — also make a return, though they’re also joined by spider-like “spitters,” which are fully CGI.

Like any self-respecting fantasy property, The Dark Crystal is filled to the brim with this kind of world-building lore — it makes sense that you’d need a bit of a spotter’s guide to keep up with every majestically-puppeted creature and Gelfling clan marking just to get by.

Thankfully, Age of Resistance is worth the wait.