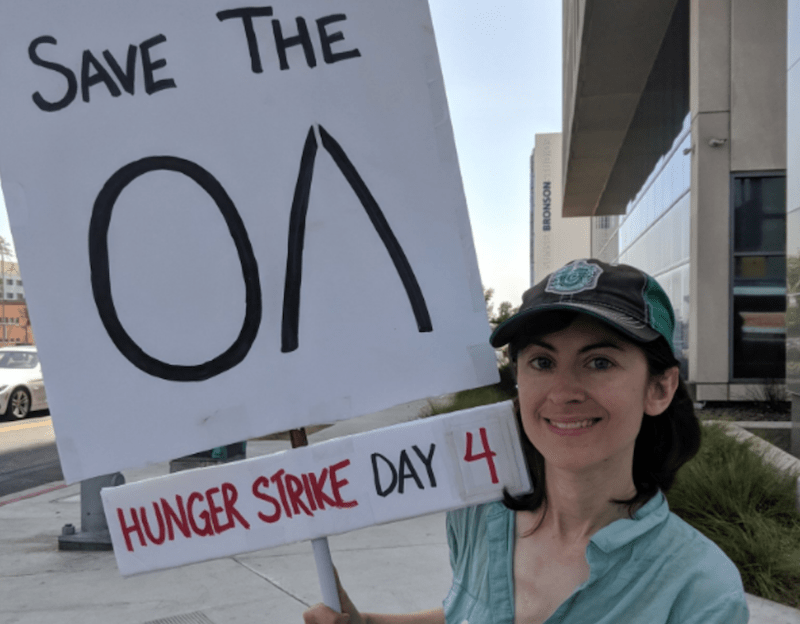 Earlier this month, Netflix announced they would not be renewing sci-fi mind-bender The OA for a third season. Fans voiced their displeasure in a number of ways, including flooding Netflix’s Twitter account with the #SaveTheOA hashtag and purchasing billboard space in New York City’s Times Square. There is one fan, however, who is embracing more extreme tactics. In the grand tradition of Cuban dissidents, Irish republicans, and the Indian Independence Movement, a woman named Emperial Young has gone on hunger strike.

In an interview with Insider, Young said she had been picking in front of Netflix’s Hollywood office since August 16th. Her hunger strike began on the 18th. To Young, this is about much more than a TV show: “Entertainment is food for the human soul and Netflix’s algorithm isn’t measuring that right now. And by not taking physical food, I’m saying that this show is more important food to me than actual food.”

While keeping physical post outside Netflix’s offices, Young has kept up an active presence online. Through her Twitter feed, she linked her protest to broader societal ills. “While it looks like I’m protesting a TV cancellation on the surface, I am protesting the capitalist forces that killed the show, general lack of societal support resources, and to raise awareness about properly teaching AI,” she tweeted. “The cancellation is a lens for these topics. Which doesn’t mean I’m not trying to save the show. I definitely, definitely am! But that’s not all I’m doing.”

To that end, Young has laid out the “five movements” of her protest in a series of Twitter threads. You can find the first part of each ahead.

According to Young, she’s had nothing but water since starting the strike nine days ago. That may sound improbable, but the human body can take a whole lot worse; Gandhi twice fasted for 21 days. The Cuban dissident poet Pedro Luis Boitel died of starvation after 53 days, and the ten Irish republicans who perished on hunger strike survived between 46 and 73 days.

So far, The OA remains canceled, and Young remains on hunger strike.

Tens of thousands of people die in the United States every year because they cannot get help. They cannot afford services to treat mental health issues and medical conditions. Untreated conditions make it harder to obtain employment, making it even more impossible to get help.

This doesn't mean all companies are evil or even inherently bad. Some have at their core a deep moral stance or philosophy which they enduringly abide by.

Once upon a time, there was a little girl who lived on a dying Earth. Everything was going extinct, all the plants and animals. All humanity could do was try and make the most of what was left.

People who need help but can't get it. People who look at the screen, see something resembling themselves or their struggle and their pain, and find comfort in it.

Ergo, it's not so absurd to protest a TV show's cancellation with a hunger strike. In a way, it's also mundane.

Because this is the point where our society is, a point where a TV show can be the best option readily available to someone.