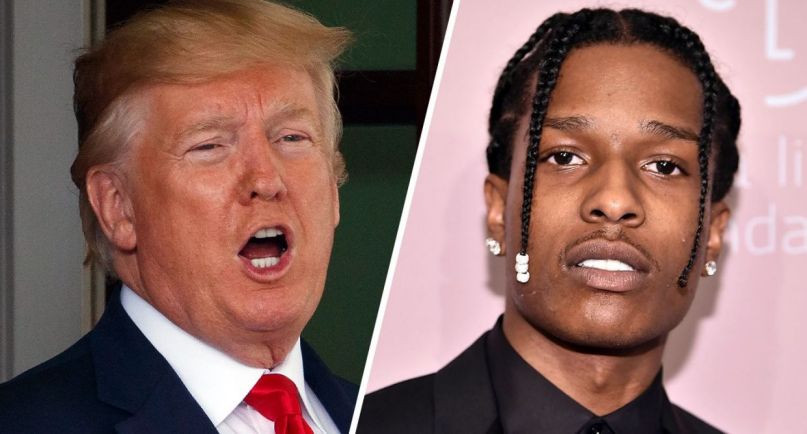 Earlier this summer, in a bid to deflect from his own self-manufactured racial controversies at home, Donald Trump became personally involved in ASAP Rocky’s assault case in Sweden. He called the country’s prime minister to “personally vouch” for the Harlem rapper and offered to cover the cost of his bail (even there is no such thing as bail in Sweden). Later, after Rocky was formally indicted and his case went to trial, Trump fired off a series of tweets threatening Sweden.

A case could be made that Trump’s involvement only worsened ASAP Rocky’s legal plight, as Sweden took the rapper’s case to trial in order to show judicial independence devoid of US influence. He was only granted conditional release after spending a month in prison and was ultimately found guilty of assault. Fortunately, a court determined that Rocky had already spent enough time behind bars and was free to go about his business.

Nevertheless, Trump and his lackeys believe the president is owed a “thank you” from ASAP Rocky — something he has yet to receive. In a new piece from Yahoo, two Trump surrogates — Darrell Scott and Kareem Lanier — blasted the rapper and his team for failing to acknowledge the administration’s involvement.

Scott and Lanier got involved in ASAP Rocky’s case after being contacted by Rocky’s management through an intermediary. “The White House didn’t ask for anything. There were no conditions attached, but my condition and Kareem’s condition was that all I’m asking for you guys to do is say thank you,” Scott recalled telling Rocky’s manager.

At one point in the process, Lanier “snapped” at ASAP Rocky’s attorney, Damien Granderson, for being too “nonchalant” about Trump’s actions. “I was like, man, you ungrateful motherf***ers, you. I can’t believe you. … We didn’t ask you guys for nothing other than for you guys to be grateful,” Lanier said he told him. “We just want you guys to be appreciative and say thank you.”

Lanier and Scott said they reached out to ASAP Rocky’s team after failing to hear from him after his release. “We don’t get a call. We don’t get a call at all,” Scott said. He added that Rocky’s manager “started making all these excuses” about Rocky needing time to travel and “rest.”

Despite promising to get in touch with the White House, Rocky’s team ultimately went radio silent. “All he had to do was do a two-minute call to say thank you,” Scott said. “Rocky hasn’t even called us and said, ‘Hey, man, thank you guys. I appreciate it,’ in private. Just in private.”

“One of the problems that we have as a culture — and I’m talking about black Americans — is herd mentality,” Lanier added. “Right now it’s popular for those guys to bash President Trump.”

Elsewhere in the article, Lanier dismissed criticism that Trump’s involvement was a form of pandering. “He won the election with 8 percent of the black vote,” he said of Trump. “He doesn’t need black voters or need A$AP Rocky to get black voters. … He did this because it was the right thing to do.”