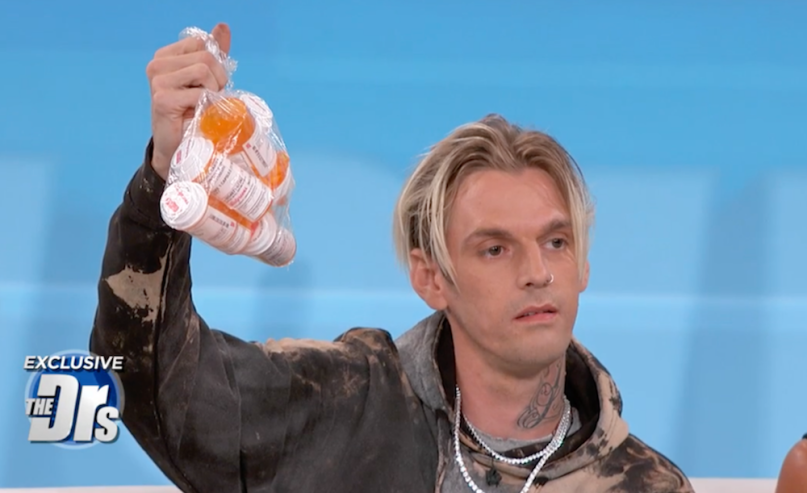 Aaron Carter on The Doctors

Child pop star Aaron Carter opened up about his extensive mental health issues in a new interview on The Doctors. According to the 31-year-old singer, he’s been diagnosed with personality disorder, schizophrenia, manic depression, and acute anxiety.

Update: Despite his mental health diagnosis, Carter says he’s unwilling to give up his 500 guns. He also refused a 5150 psychiatric order, claiming he doesn’t pose a threat to himself or others.

The “I Want Candy” singer also brought his mother, Jane, onto the show, hoping to convince her to finally admit to her drinking problem.

“Her drinking is 5 a.m. in the morning she wakes up, she drinks a whole bottle of vodka … I’m the only one that goes down there and visits my mom,” Carter explained. “I see her in the craziest, most toxic, unhealthy place in the world.”

Carter previously discussed his drug addiction issues and sexuality in a 2017 appearance on The Doctors.

Since entering the entertainment business in 1995, Carter — the younger brother of Backstreet Boy Nick Carter — has dealt with a number of DUI arrests and marijuana charges. In September 2017, Carter checked himself into a rehabilitation and treatment center. At that point, he was having a difficult time coping with the sudden death of his father earlier that year and weighed just 115 lbs.

“I definitely felt like I hit a rock bottom personally and emotionally,” Carter said in a People interview at the time. “I started getting really stressed out about things like my relationship or the expectations people had for me, and then I just stopped eating.”

Carter’s full two-part interview on The Doctors airs Thursday and Friday. Teaser clips can be seen below.