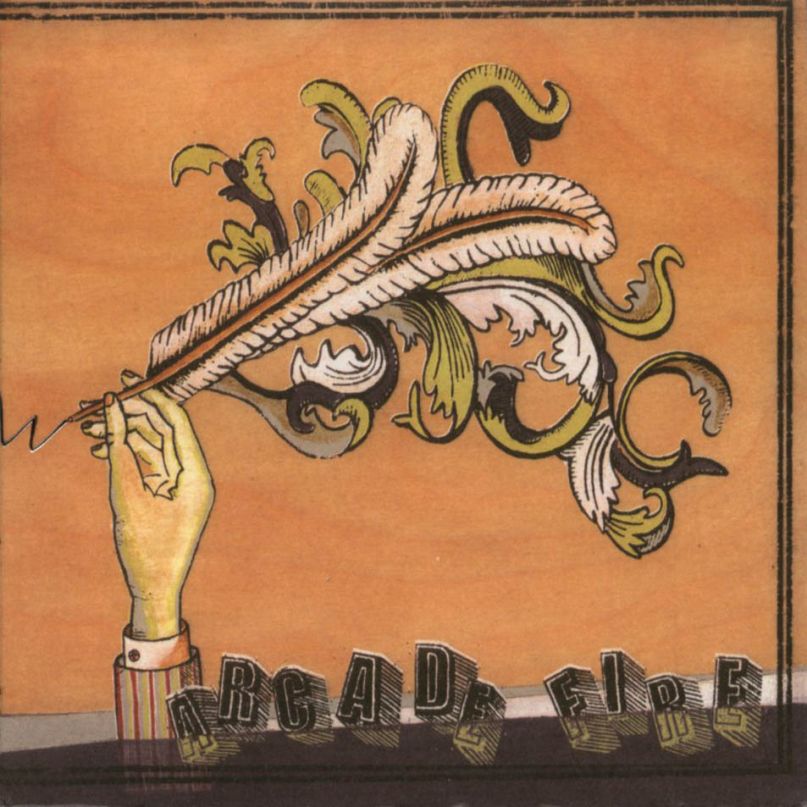 I love music more than anything. I know that statement sounds cringey, like it belongs as a 2007 Myspace photo caption, but I mean it. It’s the only thing growing up in a chaotic household that was ever consistent and made sense to me. After every family blow-up, every fight, every eruption of anger, aggression, and sadness, I knew I was okay once the yelling stopped and someone put on a record. Hearing music signaled that the danger had passed.

When I was 10, my parents uprooted us from our inner city Los Angeles neighborhood and moved us north to a small, quaint town in Oregon, the type of place where they thought our problems wouldn’t follow us. So, after having experienced an onslaught of what I now, at 25, can identify as “childhood trauma” in my first few years of life, I was dropped into a new environment where I was supposed to be “better,” supposed to be “okay,” and just supposed to “move on.” Obviously, it didn’t go over that simple.

(Read: For Daniel Johnston, Art and Therapy Were the Same)

My childhood left me with wounds. I grew into a teenager who experienced fits of anger and aggression — except they were with myself. I was anxious, depressed, and at a constant battle with my own mind. I had become numb and would shut down in order to protect myself from feeling everything all at once, because feeling anything at all caused physical pain. This is a symptom of bipolar disorder and complex post-traumatic stress disorder, neither of which I was diagnosed with until years later as a twentysomething. All I knew then was that I was feeling a lot of things and had no way to make sense of them. I felt my emotions down into the very core of my being, would have full-body reactions, and had no words to articulate whatever it was I was going through. This is another symptom of childhood trauma. It was always safest to not say anything at all.

And with music, I didn’t really have to. I used music as a way to navigate and maneuver through emotions and feelings I couldn’t identify. I listened to certain songs because they made me sad, and I wanted to feel sad; I listened to certain records because they made me feel light, or they made me feel heavy. Music has always been a means of catharsis for me, and most of the time, unknowingly, whatever album or playlist of songs I decided to listen to reflected the type of catharsis I needed at the moment. In so many of those moments, that album was Arcade Fire’s Funeral. It was the record that literally saved my life over and over in high school.

In a climate where we can sum up Arcade Fire as music for sad indie boys turned into somewhat theatrical arena rock, there’s a reason this record is a mainstay in my life and many others’. There’s a reason you can hear the lingering of its tracks in the background of music festivals, movie scenes, and on almost any road trip or bonfire playlist. And there’s a reason all these years later that within seconds of hearing the gentle hum of an organ, undulating strings, and the repetitive figures of a simple piano from its shimmering theatrical opener, “Neighborhood #1 (Tunnels)”, my heart becomes heavy.

I’m introduced to frontman Win Butler’s neighborhood. It’s there where I embarked on so many epic journeys during adolescence — filled with growing pains, naive dreams, and sometimes tragedy. The album’s second song, the conventionally rock-oriented “Neighborhood #2 (Laïka)”, provides a second-hand account of one individual’s struggle to overcome an introverted sense of suicidal desperation. This song felt like a reminder to stay during all the nights I gasped for air and begged for a reason to continue on through the pain.

“Neighborhood #3 (Power Out)” unfolds as a shimmering, bold anthem that combines a steering, infectious pop beat and ominous guitar assault to create a passionate, fist-pumping album manifesto. It’s a fan favorite for many. For me, I would listen to this song late at night in the midst of a manic episode, where I had no idea what my mind was doing and all I could do was convulse and cry. The song’s construction is intoxicating, and the bond of Butler’s exasperated pleas (“I went out into the night/ I went out to pick a fight with anyone”) felt like an emotional call to arms (“The power’s out in the heart of man/ Take it from your heart/ Put it in your hand) that caused me to march and scream along in the safety of my own bedroom.

“Neighborhood #4 (7 Kettles)” remains the album’s most underrated track and one of the most vulnerable songs in all of indie music. It’s a reflection on the inevitable passage of time. The “watched pot” in the song is time itself. Butler sings that people feel that they can stop time if they “watch” it or focus on a particular moment, but regardless of whether his eyes are closed or not, the passage of time remains inevitable. As a teenager, time seemed to simultaneously move too slowly and too quickly. I was urged to hurry and grow up and take responsibility for myself, but instead I often found myself during the last few months of my senior year sneaking out late at night to smoke cigarettes at a nearby playground — an act that I now realize as an attempt to be grown up but done how a child might.

However, it’s “Wake Up” — the record and the band’s most famous track — that has always seeped straight into my bones. It’s the song that causes the hairs on my arms to rise, that lump in my throat, the song that no matter how many times I hear it live — or no matter how “hipster” it has been deemed — I weep, shake, and gleefully sing along to. “Wake Up” felt eerily close to what I was experiencing back then, and when I listen now, it reminds me of how far I’ve come.

The song goes, “Something filled up/ My heart with nothing/ Someone told me not to cry/ But now that I’m older/ My heart’s colder/ And I can see that it’s a lie.” This particular “something” felt different than other sentiments on the album; this “something” was a traumatic event — maybe emotional, physical or sexual, or the death of a loved one. For me, that “something” echoed a past I was told to not talk about, to keep quiet about, to move on from because it was in the past and of no use in the present. I was told not to cry. Because of that, I grew up not understanding how to process my emotions or use my words to share how I feel. Instead, I would experience fits of rage and throw “tantrums.” “Wake Up” was the first time I came across a song that made me feel like it was okay to be mad at what had happened to me, that understood that even though I was trying to be “okay,” I couldn’t be, not without talking about it. It gave me a way to communicate what I was dealing with or, more importantly, not dealing with.

The lines “Children, wake up/ Hold your mistake up,” urged me, between the sharply plucked guitar, to fire through the mistakes of my past and accept life with all its flaws; it made me believe that I could take control of my life and arrive at my full potential. And this is why this album is so important to me. It took everything stirring inside me as a teen and helped make sense of it. Funeral helped me decide I was going to get help, even if I had to do it alone. I didn’t have to live in anger, sadness, or by barely holding on anymore.

This song and record are filled with existential wounds, but choose to revel in them. It reminds me that where there is darkness, there has to be light and that that same beacon of light is inside of me; it’s just a matter of unlocking it. So, it makes sense that my all-time favorite Arcade Fire song is the one that soon follows “Wake Up”. “Rebellion (Lies)” sparked the defiant child in me — the child who rebelled against staying quiet and pushing her demons down, the one who decided to take control of her future by deciding to finally deal with her past.

It’s been 15 years since the release of this seminal indie rock record, and its themes of love, loss, coming of age, and a naive sense of hope have been analyzed and discussed tirelessly. But Funeral has stuck with us because those opening chimes in the first track remind us of that feeling of invincibility and what it was like to be that kid growing up in that neighborhood, where everything we did and each day felt significant, where we were filled with dreams, however naive, and where we were excited and scared and felt like we were just at the very beginning of it all. Funeral stands as a surging orchestral rock story that gives us solace and purpose in the communal realization that growing up is the hardest thing any of us has to do, no one prepares us for it, and we’re always constantly doing it. This might be obvious to many, but for a girl who could barely take control of her emotions and translate them into thoughts and less so into coherent words, Funeral felt like a voice of reason.