Artist of the Month Bethlehem Steel on Strength in Numbers, Cutting the Fluff, and Trick-or-Treating on Tour 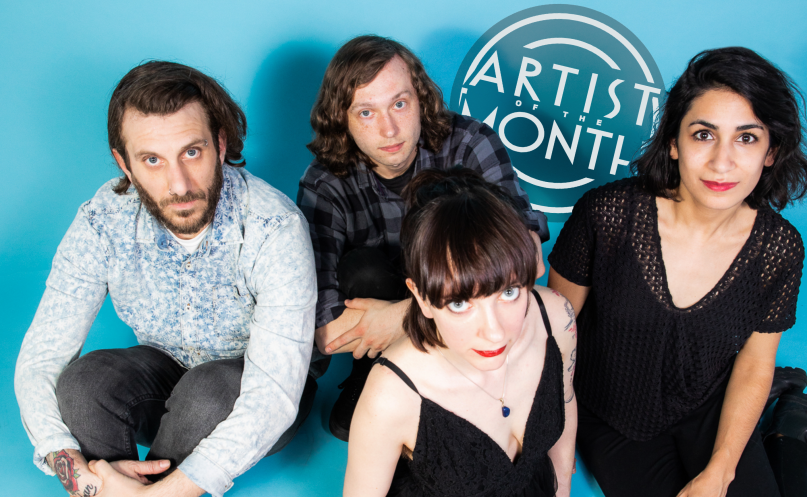 It’s mid-September and the weather is beginning to shift — one day is balmy, the next crisp. The prolonged chill of fall is coming, but you can’t yet pin down the weather’s tempo.

Enter: Bethlehem Steel. The Brooklyn-based foursome make the perfect accompaniment to these autumnal atmospheric happenings. Their brand of guitar rock is brooding, raw, and chock-full of time changes. And, like the weather forecast of late, essentially unpredictable.

The band was originally a trio, comprised of vocalist and guitarist Rebecca Ryskalczyk, bassist Patrick Ronayne, and drummer Jon Gernhart. Longtime friends Jon and Rebecca met Patrick while working at a local venue. They released their first album, Party Naked Forever, in 2017. Songwriter and guitarist Christina Puerto was brought on last year and instantly clicked.

“It was an immediate yes,” Rebecca said of Christina’s audition. “Nobody else mattered. Even though we should probably hear the other people we told to come try out, we were like, ‘No, this is the one.’ And I was right.”

The addition of Christina cemented the group’s lineup and their sound.

“I always thought the stuff Becca wrote when we were a three-piece was always different from a lot of other stuff going on [in the Brooklyn scene],” Patrick said. “It may sound kind of contrived, but it is, and maybe that’s one of the reasons it’s taken us a while to cement exactly how it’s going to be. [Our sound] wasn’t automatically one thing. It was hard to come by.”

Their sound is hard to come by because it grapples with emotion in real-time — one minute it rambles, the next it rages.

We sat down with the band as they prepared for their self-titled sophomore album (out now!) to drop.

Rebecca Ryskalczyk: When we were looking for another guitar player, I knew I wanted another girl; I knew I just needed it. Every female touring musician knows it’s not easy all the time.

Patrick Ronayne: There’s a definable thing that you can’t really ever achieve without having another woman around.

Ryskalczyk: Well, just things like we would finish a set and people would automatically go talk to Pat about my tone or like, “Oh, how did you write that song?” It’s not [Jon or Pat’s] fault. It’s just easier to have another woman. It’s not a female-fronted band; it’s just a fucking band, and there happens to be two women.

I wanted someone who would be interested in writing or helping me to write parts. And when she sent me her stuff, I was like, “Oh, yeah, this is really sick,” and it just made a lot of sense musically. She was better than I could have imagined, as a human and bandmate.

Ronayne: You guys move in very similar, mechanical ways in how you think about music. Writing like both of you do, it’s great that they found each other. It’s very off-kilter and very specific. Meshing those two worlds is interesting as hell looking in as a rhythm section and seeing how all of these parts are coming out. It almost seemed like a no-brainer. It was like, where the hell has Christina been this whole time?

Christina Puerto: I had never really been in a band with another woman, but [Becca] had. She had that experience before and knew what it could be like. I didn’t have a reference point. It was weird how easily we were able to write together and play together. It was surprising; it was a pleasant surprise. And it went further than I ever could have possibly imagined.

On Cutting the Fluff

Ronayne: [Defining our genre] is always a hard one; a lot of labels get thrown around. Shrug rock. Grump rock.

Puerto: So we always throw around this word heavy, but I think we’re all talking about something different when we say that. But each of our definitions are correct.

Ryskalczyk: Emotionally heavy. Very little fluff. Fucking no fluff. Leave your fluff at the door. Everything is very to the point. It’s not just going through the motions talking about your day.

Puerto: It’s topics that feel important to us. Communication is also something we struggle with … verbal communication.

Ronayne: I think it’s schizophrenic musically, but it soothes you along with the subject matter. It’s moody. It’s internally very moody, and the music reflects that. So playing things very straight … It’s kind of like a little bit of a roller coaster in every one of our songs.

On the Decision to go Eponymous

Ryskalczyk: We all kind of got on board with [doing a self-titled] right away. And let the artwork be the title instead of giving it a name.

I definitely feel that [doing a self-titled] was a good look to do, not only because it just seemed right, but it’s also because there is a new identity for the band. It sounds sonically and emotionally like it’s never sounded before with the addition of Christina. And there’s a whole new songwriter in the group. It’s kind of like a reinventing of that, a new invigorating chapter in the band’s history. And it’s also a cool-ass-fucking move to do it on the second album. But like Becca said, aesthetically, it really speaks for itself. The band is what it is now, and we hope to make this iteration the best it can be.

On Being Stronger Together

Ryskalczyk: [Songwriting with Christina made me feel stronger in] the way of talking about men. Whereas before I felt awkward when I was alone, singing about difficult things — not just boyfriend things.

Ronayne: It’s like gaining an ally. Obviously, we’re always respectful, but having Christina in the room now, I wouldn’t say it makes us feel better, but it makes us feel good to know that Becca and Christina have that. It’s something that [Jon and I] don’t understand too well. Like Becca said, people always come up to us talking about my tone and talking about a tuner. People come up with any excuse to talk to you when you arrive at a venue or when you finish playing something and avoid talking to Becca because she seems intimidating maybe or just don’t know how to approach her. But together, you guys are very very strong.

Puerto: The way that [Becca] put it is a little different than how I feel about it. Well, it’s definitely about having a woman there. But it couldn’t be just anybody. It’s more about the way [Becca] is and less about the fact that she’s a woman. We’re friends and we are comfortable with each other. It felt easier to write and share with each other in the early stages. ‘Cause that doesn’t come super naturally; that’s not something that I’m super inclined to do with everybody.

Ryskalczyk: Yeah, subconsciously, it was like now is the time to write about this stuff.

Ryskalczyk: I really like coming up with [music videos]. It just kind of happens in my head, and then I try to do it.

Ronayne: The “Fake Sweater” video we filmed in Christina’s house in Jersey City. But, it was never supposed to be there. It was supposed to be in a mansion on Staten Island.

Ronayne: They cancelled on us that morning. The feel of that video was actually supposed to be in a way bigger place with a lot of different rooms, and [Becca] had it all planned out. And at the last minute, they called and said, “Can we do next Tuesday?” And we were like, “Next fucking Tuesday?”

Puerto: So, I moved all the furniture out of my house, basically. That was wild. I can’t believe we pulled that off. But it worked out.

Ryskalczyk: We just try new stuff. Like the “Bad Girl” video, we had to figure out how to do a chase scene. Luckily my apartment has a computer chair that has been rigged with roller-blade wheels. We just ran that down the street. It was Adam Kolodny filming, and we just pulled him while they ran. Like almost ran into a couple of cars.

Ronayne: We were running down these Ridgewood streets. Becca and Christina were running backwards down the block in a chair while being filmed. It’s some real DIY stuff.

On What, Exactly, Is in a Name

Ryskalczyk: I was missing Buffalo a lot, like a lot a lot, and wanted to go back. And there was a steel plant there. [Jon and I] are both from Rust Belt towns, and it just seemed right. I kind of hate it a little now. Whenever someone says, “Oh, that’s a cool band name,” now I’m like, well, it’s kind of a shitty place. They weren’t great people. So many people died of cancer. A lot of my extended family all worked there and died of cancer from working there. It’s not the happiest name.

Ronayne: But, it’s a good way to connect you to there. It’s funny because, at least a couple of times every few months, there’s someone who thinks we’re appropriating the name or some shit asking us where we’re from. “Why are you calling yourself Bethlehem Steel? You’re a Brooklyn band.” And then they kinda fall back a little bit when they find out Becca is from Buffalo and grew up near the plant and Jon is from upstate. It’s just silly. What’s in a name? There’s a fucking soccer team named Bethlehem Steel.

On What to Expect from Bethlehem Steel

Ryskalczyk: The singles are the happiest, so expect some sadness. The rest is gonna take you down a darker road.

Ronayne: There’s not a lot that sounds like “Bad Girl” or “Govt Cheese” on the record. It’s spread out. Everything is very uniquely our own sound. It’s hard to pinpoint. It’s a little bit of a Frankenstein. It’s heavy, mournful. It’s fast. It gets a little tricky. It’s scream-y.

Ryskalczyk: If you listen really closely to the song “Couches”, you can hear Pat crying.

Puerto: That was an intense night, when [Becca} did the vocals for “Couches”. I was pressing record; he was crying.

Ronayne A bottle of Evan deep and hearing Becca belt out probably my favorite song on the album. There’s some very, very intense lines on there, but I didn’t want to leave the room. You can hear me crying a little bit. That’s fine, maybe someone else will cry a little bit. That’s the song with the cello on it.

Ryskalczyk: The cello wasn’t there yet, buddy.

On Trick-or-Treating on Tour

Ryskalczyk: We’ll be on tour [on Halloween], in Denver. We have the day off, and I’m going to go trick-or-treating with my two-year-old nephew. He’s going to be a bear.

Ronayne: Since we have an AirBnb, do you think we will have trick-or-treaters?

Puerto: We gotta get candy! We’re gonna dress up as something and hand out candy. We have a lot of time to think about it in the car.

Ronayne: Becca and Christina have been making slime. We’re thinking about incorporating it into our main merch booth, but we’re going to try it out at the main record release. It’s a lot of fun, very sensory pleasing.

Puerto: We got overzealous and got two gallons of glue when we first got into it. And I think we only made a very small part of one of them.

Ryskalczyk: And we also have a gallon of fake blood. We could hand the kids slime!

Ronayne: Don’t go giving away all our slime!

Puerto: We’ll have to workshop that idea.