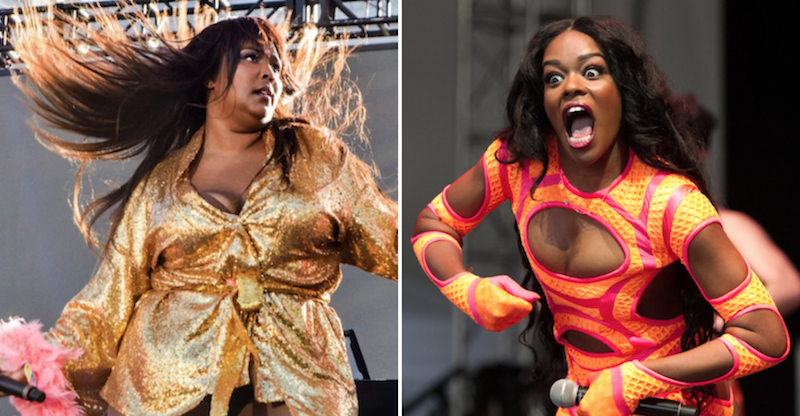 If you were thinking it’s been a minute since Azealia Banks said something batsh*t stupid, well here we are. The incendiary Harlem rapper has gone after Lizzo for no good reason in a since-deleted Instagram comment tirade.

Though the source post is hard to trace, context clues suggest it was related to Lizzo nabbing her first Hot 100 No. 1 single with “Truth Hurts”. As Complex notes, someone screengrabbed the comments before they disappeared. “… This fat girl joke going for so long is honestly peak boredom,” wrote Banks. “This song is not good, nor is the dumpy fat girl spectacle live set she does.”

Banks added some asides about Lizzo having actual talent, but this isn’t the first time she’s accused the Cuz I Love You star of trading on what she calls “white America’s” “simultaneous lust and disgust for the black female body.” This time, however, she went more than a few steps further, labeling Lizzo a “millennial mammy” and backhandedly body shaming her:

“I understand the body positivity thing but if it were that the most vulgar bits of it wouldn’t be broadcast like that lmfao…. imagine what the rest of the world thinks when they see lizzo jumping around in leotards with cellulite … no one says body positivity – she looks like she is making a fool of her black self for a white American public. Nothing more nothing less.”

In a truly baffling turn, while she repeatedly used the word “disgusting” to describe Lizzo’s image, she turned to Chicago rapper CupcakKe as a counterpoint. Ya know, CupcakKe, the woman who made a video that featured a white fisherman trying to catch her with a dildo while she wore a skimpy mermaid outfit and her having sex with Squidward’s nose. To be clear, that’s not to say anything against CupcakKe’s persona or music, but for Banks to use her as an example of someone who might “flourish without the simultaneous lust and disgust phenomenon lizzo incites in the public” is pretty nonsensical.

Elsewhere in the truly epic rant, Azealia Banks took aim at Cardi B and Lil Nas X, lumping them into a group of black artists she labeled “lessers.” She wrote, in part,

“They are really choosing the worst of the black womens crop to advertise America with …I guess they saw us moving too fast with it because if you realize, after beyonce became political in ways they didn’t like the elite stopped giving her that top top spot and started cycling out these lessers… giving them beyonce level accolades white both being no where near the level of black female excellence she is.”

(Wait, since when was Beyoncé not the top top spot?)

By the end of it, Banks even managed to rope Adele into her tirade. She said the “fat, white” pop megastar got an easy pass while Lizzo “gotta jump around and act stupid to get half the attention while she has more talent than white Adele.” She went on to say, “White people really reward [Adele] for being fat because I really don’t think she can sing.” Well, there’s a take.

Any points Banks might have had are mooted by her constant belittling of Lizzo’s persona and body — and her dumbfounding logic, of course. Read the full diatribe below.