She also covers songs by Nicki Minaj and Avril Lavigne 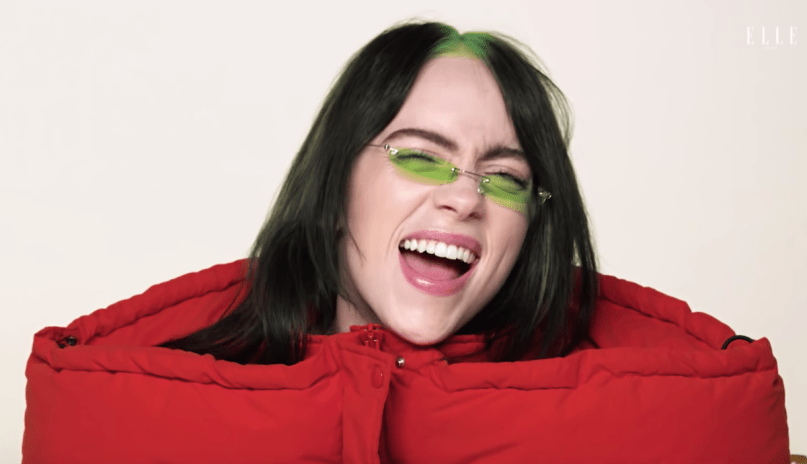 Billie Eilish may have become famous for her brooding personality, but she sure loves the peppiest pop songs around. In a game of “Song Association” with Elle, the off-kilter pop star sings lyrics to songs by Radiohead, Miley Cyrus, Nicki Minaj, Clairo, and more.

The game of “Song Association” is simple: the player is given a single word and must sing a song that uses the word before the timer ends. Those who have played seemingly simple games before will recall that sometimes the most obvious questions are the hardest ones to answer. In this case, it’s words like “dance” that stump Eilish, who knows so many songs that use the word that her brain can’t help but draw a blank in trying to pick just one.

(Read: Billie Eilish Playfully Drags Us to Hell on the Brooding When We All Fall Asleep, Where Do We Go?)

After a few stumbling connections, like The Weeknd’s “Worth It” for “perfect” and Miley Cyrus’ hit “Party in the U.S.A.” for “party”, she gets on a roll. We won’t ruin all of the fun for you, because seeing where her mind goes is what makes the game so exciting, but she does eventually sing hits by Big Sean, Pink, H.E.R., Justin Bieber, Nicki Minaj, Avril Lavigne, Radiohead, Clairo, and Pharrell. Check out the full video below.

Eilish has hit the ground running since the release of her debut album. “Bad Guy” dethroned “Old Town Road” for the No. 1 single in the country, she merged heaven and hell in the music video for “all the good girls go to hell”, and she will perform on Saturday Night Live later this year. In between all of this, she found time to protest abortion bans, too.