Blink-182 gift Lil Wayne a blunt on stage for his birthday: Watch

Delivered on a silver platter for his 37th birthday 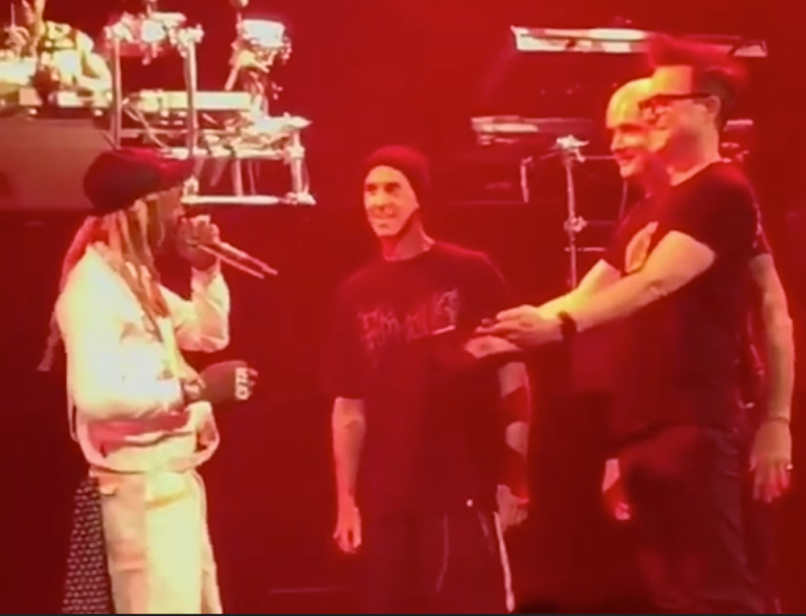 To celebrate Lil Wayne’s birthday, Blink-182 surprised the rapper during his set on Friday night, walking on stage to gift him a blunt on a silver platter. Lil Wayne was, to nobody’s surprise, loving it.

Lil Wayne superfans will be quick to point out that his birthday technically hasn’t happened yet; he’ll actually turn 37 years old on September 27th. However, he’s been touring with Blink-182 as a special guest for weeks, and their September 20th stop at Barclays Center in Brooklyn was their final night of the co-tour. As such, Blink-182 wanted to seize the opportunity to wish him an early happy birthday.


The whole exchange was luckily caught on camera by one Reddit user. In the clip, you can see Mark Hoppus, Travis Barker, and Matt Skiba run onstage while Lil Wayne looks at them confused. Hoppus holds a small tray in his hands and extends it towards Tunechi, grinning like a fool while his bandmates laugh. Lil Wayne chuckles and yells, “What the fuck?!”, before picking up a blunt from the tray and asking if they’re serious. He gets a member of his crew to light it, instructs the crowd to cheer for Blink-182, and then thanks them again. “My fucking brothers for life, man,” says Wayne. “They came on the fucking stage and gave me a blunt! I’m gonna smoke this.”

Thank goodness he didn’t quit the tour like he said he would, or we wouldn’t get to witness this absurdly perfect music moment. Watch it all unfold below.

— lemonade was a popular drink and it still is (@mattwhitlockPM) September 22, 2019

According to one fan, the blunt had some powerful effects. After he accepted the gift, Lil Wayne, who had just finished his last song, agreed to play a few more hits, including his still unreleased remix of “Old Town Road”.

Unfortunately, the sticky may have been a bit too icky; Wayne was meant to be the penultimate main stage act at Life is Beautiful in Las Vegas on Saturday, but he failed to show up for his time slot. Fans waiting for the show to start were instead greeted by the message, “Unfortunately, Lil Wayne will not be able to perform tonight. Sorry for any inconvenience.”

Lil Wayne has me out here looking like a dumbass lmaoooo pic.twitter.com/DHpRj4Hnza

Blink-182 may have just finished this leg of the tour, but they’re still set to play California’s Aftershock Festival next month. Get tickets to that here. It’s likely they will hit the road again soon to support their new album, NINE. The album is available to stream now. You can also revisit the “What’s My Age Again? / A Milli” mashup the two acts released to preview their co-tour, too.