Bruce Springsteen works out at $9.99 a month New Jersey gym 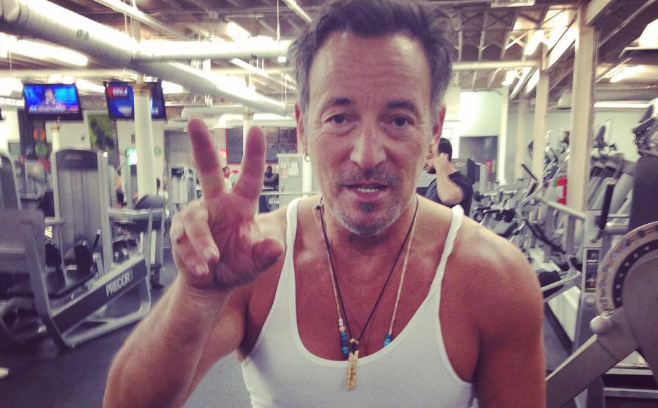 Bruce Springsteen at the gym, photo via @jordanrawlins

Bruce Springsteen has revealed his workout routine. Thanks to an old profile in The New Yorker that discussed his exercise approach, fans have kept close eyes on the legend, going so far as to confirm that his routine hasn’t changed after spotting him at a New Jersey gym.

In the 2012 profile, critic David Remnick asked Springsteen how he was able to stay so fit several decades into his career. “Think of it this way: performing is like sprinting while screaming for three, four minutes,” answered Springsteen. “Your adrenaline quickly overwhelms your conditioning.” So to keep his live shows up to par, he has followed the same exercise regimen for 30 years: “He runs on a treadmill and, with a trainer, works out with weights. It has paid off. His muscle tone approximates a fresh tennis ball.”

It’s been seven years since the interview ran, of course, but sources told The Post they regularly spot Springsteen busting a sweat in New Jersey. “I just saw The Boss on the treadmill at WorkOut World in Tinton Falls,” one fan said. “He was swimming in the ocean at the Chapel Beach Club in Sea Bright all summer,” added another. According to MarketWatch, he’s recently been spotted on the treadmill at Marlboro, NJ gym Jersey Strong. That means Springsteen’s incredible form comes racks up a bill of just $9.99 a month.

Whatever Springsteen is doing, it works. The classic rock legend just turned 70 years old and shows no signs of stopping. Fans will get a chance to see him on the big screen soon, too, as the companion film to his new album Western Stars is getting a theatrical release. Watch the Boss do his thing in the film and it will leave you convinced you need to start following the same workout plan. At least it’s affordable.

Why this never happens when I go to the gym ???? :)))) #springsteen #brucespringsteen #gym pic.twitter.com/Ajb5NBycdh