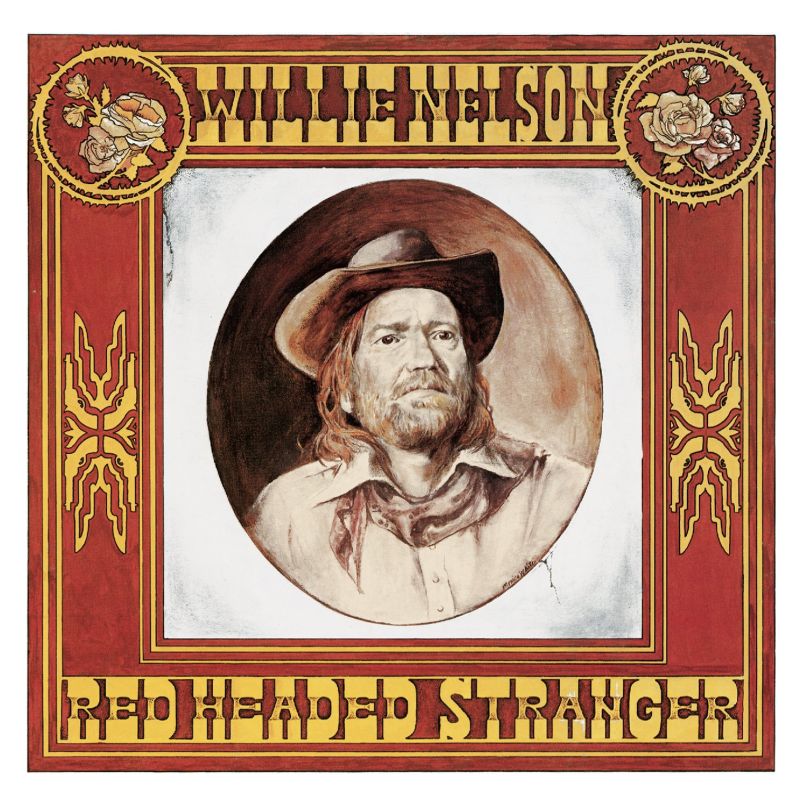 Red Headed Stranger is a haze. A half-awake dream, fueled by weed and Lone Star, where the past and present become a natant blur, coming intermittently into crystal-clear focus. A dreamily edited together montage of country music memories where the roll of a barrelhouse piano fades into fireside balladry into waltzing in a smoke-filled honky-tonk into a gypsy- jazz jam session into a crackly radio broadcasting folk songs from just south of the Texas border. A tribute to the songwriters — Hank Cochran, Eddy Arnold, Juventino Rosas, and Fred Rose, among them — whose vital elements combined boiled in Willie Nelson’s guts as he tried his damnedest to play the Nashville game. Nelson waited as patiently as he could for the right opening to tap into this stew, top it off with some original material, and serve it up as a warm, inviting concept album about revenge, regret, and redemption.

Red Headed Stranger was also the album where Nelson and the rest of the music world (the suits at Columbia, country radio, and the folks who bought records in 1975) finally came to an understanding. “I’ve been told that my songs and me were ahead of my time for so many years,” he told Rolling Stone’s Chet Flippo in 1978, “but if the times are catchin’ up to me — and it seems like they are — and if I don’t progress, they could very well pass me, too.”

Nelson was three years and five albums removed from Stranger by that point, taking even greater risks with Stardust, his Booker T. Jones-produced collection of pop standards. He could have said it years earlier, though, right after he had finally wrenched himself from his RCA contract and its bruising efforts to have him hew to Nashville sound. He left Texas, his sails blown by the metaphorical smoke of a fire that destroyed his home in Tennessee and the literal smoke he was releasing from his lungs on the regular. He grew his beard out. He grew his hair out. He wore an earring. He raised hogs. He settled in, waiting for some label to gift him with that lofty contractual phrase: complete artistic control.

That finally arrived via the folks at Columbia Records who had to grit their teeth as Nelson and his longtime band settled into a studio in Garland, Texas, to spend five days recording a country concept album, built around the title track, a tune originally written for Perry Como that found commercial strength in a version recorded by Arthur Smith and his Cracker-Jacks in the early ‘50s.

Nelson wanted to progress, but did so by going through a kind of musical regression. The details of the musical story he wanted to tell were fleshed out by original material, but the connective threads were songs from the past, favorites that he used to play during his time as a DJ and written by friends. Then he stripped the arrangements of this material down to the studs. The only way to sell this story, it seemed, was to join it with music that was raw and immediate, (mostly) acoustic and rough-hewn. Some may have felt that Nelson had turned in a demo instead of a finished album, but the record went on to be his first No. 1 album on the Country chart, his first crack at the Billboard Top 50, and a work that sold millions.

What some failed to see was that it was Stranger’s simplicity that gave the album its enduring strength. Not an easy thing to predict when you’re expecting something with a little muscle and a bit of ribald, good-natured fun. For all its romantic quietude that closes the album on a tender, peaceful note, the preceding tracks carry Biblical levels of anguish on their slender shoulders. For all that Nelson did to turn the title track into a lullaby for his kids, its tale of a man gunning down a young woman for stealing his horse is fodder for noir-ish Westerns. And what led this weary character to that pivotal moment, in the tale of this exquisite album, is just as bloody and wrenching.

Be sure to listen into The Opus: Red Headed Stranger when it launches September 19th with new host Andy Bothwell, aka Astronautalis. Never miss an episode by subscribing now. You can also revisit a selection of Willie Nelson’s best tracks via all major streaming services.

As told in the opening trio of short songs, each one snapped against the other like magnets, the unnamed man seals his fate by killing his wife and her lover. Standard narrative fare for the genre, but rendered in the language of the murder ballads carried over to the US from English folk music that were foundational to the country music vernacular. It’s the middle song of this triad that more completely sets the album’s tone. Originally written by country singer Eddy Arnold and future Oak Ridge Boys founder Wally Fowler, “I Couldn’t Believe It Was True” is straightforward: the narrator sings of going to visit his lady and finding her in bed with another guy. In Arnold’s original recording, he shies away from embodying the disbelief and the feeling of aging a decade in one moment. Nelson gets us closer to that anguish. The instrumentation is just two guitars, electric and acoustic, keeping up a light country swing. Nelson’s voice, though, quavers throughout, reduced at times to a small hush. It’s a late-night confession, justifying what he does next: wailing “like a panther” and unable to forgive his wife, even after he’s taken her life.

Its companion is another cover, and one of the songs that has become synonymous with Willie’s long career. “Blue Eyes Crying in the Rain” had a long history before Nelson and his guitarist Jody Payne’s swaying rendition. Written by Fred Rose for his compatriot Roy Acuff in the late ‘40s, it had been tackled by Hank Williams, Ferlin Husky, and Conway Twitty. Again, for a heartbroken song, there was far too much lightness within these previous takes — a fond farewell with the promise of eventual reunion. Not so through Willie’s narrative. This breakup, violent as it was, was gutting, that dying ember leaving our protagonist cold and shivering, with Mickey Raphael’s harmonica blowing through it all like a stinging wind.

What those two songs and the majority of the second side of Stranger helped to solidify in the course of Nelson’s career was his ability to embody the songs of others. He’s a musical empath, connecting on a bone-deep level with the lyrics in everything he sings. Perhaps that’s why he’s stuck to a steady intake of pot throughout his days. All the better to help steady the emotions running through his system every time he picks up a guitar.

It’s that compassion that comes across in Stranger’s back half. The peace that his protagonist finds is colored by a blunt exhaustion and quivering distrust. Not even Bobbie Nelson’s jaunty rendition of Tin Pan Alley classic “Down Yonder” can still those feelings. Hank Cochran’s “Can I Sleep in Your Arms” and the smolder of “Hands on the Wheel” (written by Willie’s pal Bill Callery) are a first dance by a couple on their third marriage, tender but cautious. Romantic yet pragmatic about the reality that it could all fall apart at any moment. They know one another’s pasts but are taking the plunge anyway, hoping that it will all go differently this time. Beautiful as that closing instrumental ballad “Bandera” is, it offers no solace or assurance. Just more wrinkles and shading and questions. Those may be storm clouds ahead, or they could burn off by morning. The only way to know for sure is to keep moving toward the horizon.