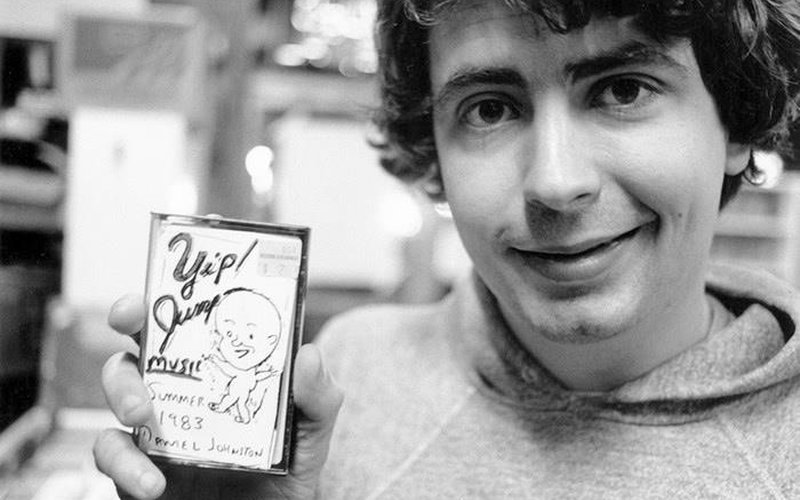 Celebrated outsider Daniel Johnston passed away Tuesday at the age of 58. His lo-fi avant garde cassette recordings inspired a generation of songwriters, many of whom have taken to social media to pay tribute to Johnston. Below, you can find tribute posts from Zola Jesus, M. Ward, The Mountain Goats, Death Cab For Cutie, Pavement’s Bob Nasanovich, Beck, Jack Antonoff, and El-P, as well as from Hollywood luminaries like Judd Apatow, Mark Duplass, Elijah Wood, Eugene Mirman, Duncan Jones, and Mark Ruffalo.

there are not enough words i can say about the important and vitality of daniel johnston’s musical spirit. he was a huge inspiration to me, to follow my creative impulses no matter how messy or simple. RIP.

giving credit again where it is due:
the late great daniel johnston wrote this song too https://t.co/HPzlfJ0L8h

Those early DJ tunes meant a lot to so many of us. “Walking the Cow” was also a favorite of mine, along with “Keep Punching Joe,” whose lyrics reference “Walking the Cow.” Rest well Daniel Johnston, you sure earned it. https://t.co/KVGvW210yB

Today our hearts are heavy with yesterday's passing of Daniel Johnston. His unique songwriting voice, so pure and so direct, spoke to us deeply. It is quite safe to say there will never be another like him and thankfully, his music will play on.

To me, Daniel Johnston's music was either very heavy or very light. There wasn't a whole lot of in between. His songs either made me laugh or they made me cry. He was brilliant.https://t.co/3alo4w9eBw

Daniel Johnston was one of my best teachers. I love his work and I’m so glad that it’s still here. Forever grateful to my dad for telling me about him after reading a review of the ‘Late Great Daniel Johnston’ compilation, and buying it for me. And thanks DJ for so many songs

Daniel Johnston’s recordings opened the door to something really special to me in my early 20’s – they seemed to have entire orchestrations going on even when it was just voice and piano or guitar. RIP

So sad to hear about the passing of Daniel Johnston. He wrote at least two of my favourite songs of all time – “Hey Joe” and “Walking The Cow”. Listening to “Hi, How Are You?” on my old cassette radio whilst doing the washing up is my mental ‘happy place’.

This one hurts. RIP Daniel Johnston. One of my favorite songwriters of all-time and a huge inspiration on what it means to be an artist through and through. He was truly DIY and always a genuine creative force. His songs will live on forever.

The world has lost a true unsung genius. May more people hear his work. Rest in peace Daniel Johnston https://t.co/ezgCf6HNMx

damn. daniel johnston made very very special music. I hope he rests peacefully. im going to listen to go listen to walking the cow a lot of time.

daniel johnston will be missed. a brilliant story teller and songwriter who carried my friends and i through many over night drives in the van. so much to learn from daniel in the way he shared fearlessly.

So sad to hear of the death of the great Daniel Johnston. Here is a beautiful performance of his which makes me cry every time. Swell season + Daniel Johnston – Life in vain – HD-ACL – with lyrics https://t.co/ELElWjpZ3P via @YouTube @Glen_Hansard @TheSwellSeason

Daniel Johnston; what a gentle, beautiful treasure. So sad to hear you’ve left us.

Daniel Johnston wrote beautiful songs and inspired countless musicians and songwriters. The heart and its truths are captured in his music. I feel lucky to have been introduced to his artistry. I never know what to say in these times, but I will miss youhttps://t.co/c7qNIuZwsI

Just got this in the mail this weekend. Sorry to hear about Daniel Johnston. RIP. pic.twitter.com/dlqFNVrhML

My dad introduced me to Daniel Johnston’s music & at first I didn’t know if it was meant as a joke or something else. But once I’d listened to a few songs, I heard the DNA of so many other’s work.
A unique & special human being.
Rest peacefully, Daniel.https://t.co/5m3hwEdS9G