Fantastic Fest Film Review: The Pool Traps A Man and A Crocodile Together To Terrifying Delight 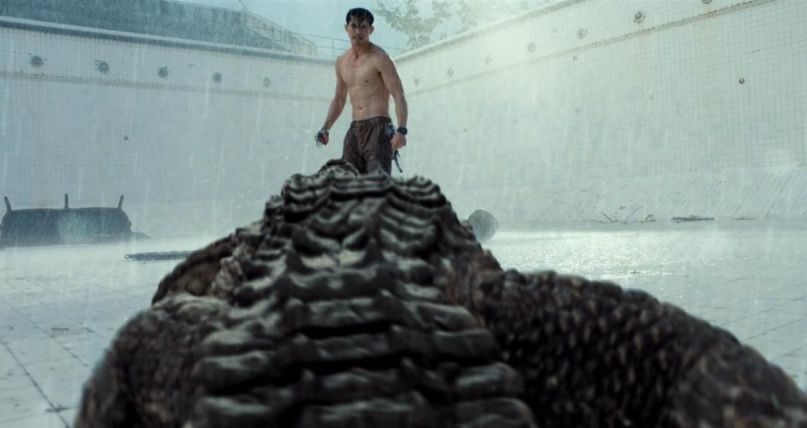 The Pitch: After the film he’s working on wraps, Day (Theeradej Wongpuapan) spends a lazy day floating in the pool with his dog, Lucky. When he falls asleep as the pool drains, however, he awakens to discover that the water level in the Olympic pool is too low for him to escape. To make matters worse, both an escaped crocodile and his pregnant girlfriend Koi (Ratnamon Ratchiratham) also become trapped, prompting a fight for survival over six days.

Sink or Swim: Credit The Pool for its insane high concept plot. On the surface, the premise seems not only insane, but unsustainable. Thankfully writer/director Ping Lumpraploeng knows exactly how far to stretch the limits of credibility, which results in a film that’s never anything less than ridiculous in the best possible sense. The 91-minute runtime is perfectly timed for what amounts to a single location, aquatic horror, creature feature, with minimal subplots or backstory and virtually no filler.

6 Days: The film begins in media res as Day awakens, bloodied and broken, all while the croc attempts to take a bite of his leg. We then flashback six days for a brief introduction to the characters and the location that dominate the film. Each day is given an onscreen title card to help track the time, though by starting near the end, Lumpraploeng admittedly — or rather, arguably — robs the film of some tension.

Unhappy Foursome: There are only four characters in the film: Day, our confident but poor protagonist; Koi, his smitten, secretly pregnant girlfriend; Lucky, Day’s well-trained dog, who is chained to the diving board throughout the film; and the croc, who alternates between sleeping with its mouth agape and lurking threateningly on the margins of the pool, looking for an opportunity to take a bite.

One of the ways that Lumpraploeng turns the screws is by continuously escalating the stakes and changing the nature of the threat. Initially, Day is simply stuck in the draining pool, then Koi falls in after suffering a head injury. When things seem as though they can’t get worst, however, the croc falls in. This constant one-upping not only creates a lot of humor, but it also keeps the energy going as there are always new challenges to be addressed.

Good Dog: One of the most fascinating creative decisions that Lumpraploeng makes is how to incorporate Lucky into the proceedings. The dog alternates between a warning system, a helper, and, naturally, a damsel in distress. Considering the scaled back approach to both location and plot, it’s a fascinating character decision to so thoroughly include man’s best friend as an integral component of the film.

Baby Mama Drama: What audiences likely won’t guess from the film’s logline is that The Pool is secretly engaging in a pro-life debate. Day’s entire character arc revolves around not just his love and affection for Koi, but also working through his concerns about becoming a father. Throughout the film, Day is repeatedly meant to care for both Koi and Lucky, often at extreme personal expense and each new challenge helps to prepare him for the sacrifices that accompany fatherhood. At times, the reiteration of traditional gender roles and the focus on the family feel antiquated, but it’s important to consider the cultural context of the film’s country of origin, where abortion is a criminal activity. This argument is actually stated early in the film when Day’s friend reminds him of the fact and that abortion is also a religious sin.

What’s The Worst That Can Happen? Pregnancy drama aside, The Pool’s main appeal is obviously Day’s efforts to escape. Over the course of six days, there’s an increasingly insane and (entertaining) number of mounting obstacles. Initially, it’s the height of the pool is too deep, allowing zero escape. But then it’s the threat of dehydration, which, of course, pivots to a lack of food, the latter of which is amusingly addressed by some choice product placement courtesy of Pizza Hut.

Elsewhere, elements that factor into Day and Koi’s survival include: the drain at the bottom of the pool, a remote-controlled drone, a sofa, barbed wire, insulin shots, a whistle and, of course, Lucky. At times The Pool’s ever-mounting series of obstacles evoke a Final Destination sequence stretched out to feature length – just when it seems as though things can’t get worse, a new twist or complication is introduced – but this only adds to the film’s comedic and thriller effect.

The Verdict: The Pool is easily one of the best single location, high concept thrillers of the year. While its social commentary on abortion feels a tad old-fashioned, the action sequences and the escalating threats make for a great time at the movies. Because The Pool is such a crowd-pleaser, it’s best seen with a loud, boisterous audience.

Where’s It Playing? Alas, The Pool has no North American release date at this time.