A reminder of what makes Zach Galifianakis so unique, special, and even daring 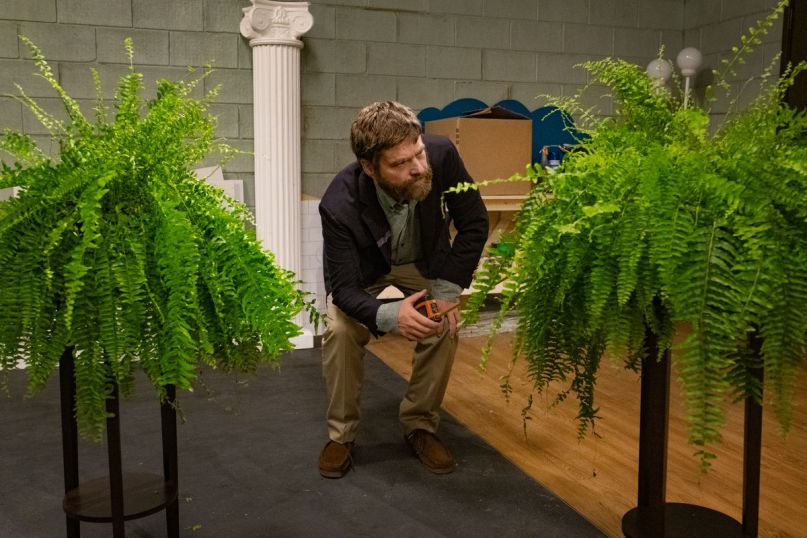 The Pitch: Between Two Ferns: The Movie is a not-quite-feature-length take (only 82 minutes) on Zach Galifianakis’ popular YouTube series. The setup is simple: Sit the completely-lacking-in-decency Galifianakis opposite an A-list celebrity, and let the bushy huckster ask some of the tackiest, most wheeze-inducingly rude questions imaginable. For example, Galifianakis once ranked Conan O’Brien last in his personal list of top Tonight Show hosts, to O’Brien’s face. He got Ben Stiller so upset that the actor started hitting parts of the set with a chair. Galifianakis even once asked Brad Pitt how hard it was to maintain a tan given that he lived in his then-wife Angelina Jolie’s shadow. Oof. Now, here comes a truncated spin on the formula.

The movie takes off in ways the sketch never so much as hinted at. We learn the origins of this Two Ferns series, meet its makers, and get a better understanding of why something so crude and seemingly inept could stay on the air. This is the Fern Cinematic Universe, full of characters, backstory, and, of course, a shit-ton of star cameos. Here Between Two Ferns is a Flinch, North Carolina public access program, 7th in the region, that somehow manages to keep bringing in all these big names. (That’s the joke, perhaps, as Rainier Wolfcastle once suggested.)

See, Ferns is under-funded by Funny or Die (in real life, and as a bit within the movie), a comedy site run by an odious Will Ferrell, who plays himself while having a blast in cowboy hats, talking about clicks and cocaine. Ferrell seems to have monetized Galifiniakis’s donkey-brained theatrics, and perhaps that’s why celebs keep coming around. But after nearly killing Matthew McConaughey, the host is forced to take his show on the road and shoot 10 episodes featuring 10 stars, in just two weeks. Zach Galifiniakis ribs people like David Letterman and Brie Larson and Keanu Reeves, mere inches away from them, stuck between two crappy plants. Zach? He stings like a bee.

Our Kind of Cruelty: “You don’t have the capacity for any sort of empathy or embarrassment.” – David Letterman.

The Late Show legend nails it. That’s basically the appeal of Scott Aukerman, B.J. Porter, and Galifianakis’ long-lasting web series. It’s pitched somewhere between fearless and clueless, but it’s also just a special kind of mean. It’s Don Rickles or Triumph the Insult Comic Dog, old-school roast comedy that takes people like Jennifer Lawrence and Bradley Cooper and makes them gum under a disinterested host’s shoes. And whether or not the interviewees are in on the gag, Aukerman, directing and writing, crafts an outstanding atmosphere of dread.

What awful, dumb thing will Galifiniakis ask Chance the Rapper next? And Zach suggesting Keanu is such an imbecile, that he need only reply to questions by clomping his foot on the floor like a horse? There’s no hiding from uncomfortable silence, or being directly told “you failed”, in this interview model. The sensation is something like falling on your butt and laughing nervously, because that sure beats crying. And Galifianakis doesn’t care, he’s happy here.

The Between Two Ferns formula endures because it’s a master class in pregnant pauses, cutting down big names, and the unsettling comedy of how not to conduct an interview. It’s why the movie is gangbusters in the interview scenes, just givin’ audiences what they love. Aukerman and Galifiniakis tap into a rich cringe nerve, and mine it to often distressing results. It’s ouchy.

Galifianakis had admitted to feeling like the project was losing steam in recent years, so why not go out with a bang? Between Two Ferns: The Movie feels very last-hurrah. Which is fine and fair for criticism. At worst, the movie needlessly builds on a concise and hypnotic formula. The backstories weren’t needed, and the idea of just trotting out names can feel a little obvious as a show-topper move.

Like, it’s hard to imagine people will care more about suddenly materialized station workers aiding Zach in his road trip than the interviews. Lauren Lapkus is the long-suffering producer, Ryan Gaul is the pissed-off camera-man, and, like, they offer less than, say, Peter Dinklage showing off his ridiculous Fabergé egg collection. And that’s the film’s comic success, it’s a cavalcade of 2019’s most entertaining celebs being fed into Galifianakis’s wood chipper. We’re here for what this brand is very much good for: Celebs taking the piss.

Keanu Reeves shows up, plenty happy to be on the show. He’s asked about a scar, because Galifianakis, likewise, has one. Zach says he got it while walking out of The Lake House. Tessa Thompson is asked about her work in Creed. Specifically, what was Scott Stapp like? Benedict Cumberbatch’s name is butchered beyond belief by the lazy brain and tongue of Zach (“Dickerflick Cabbagepatch”). Just brace yourselves for the pleasure of long-term secondhand pain.

Ain’t No Shrub: It is to Galiafanakis’s mightily awkward credit that the film moves as fast as it does. When he semi-broke out with The Hangover a decade ago, he was misread as an oaf. A next Farley or some such praise. But the Ferns shorts and recent efforts like Baskets have defined him instead as a master of both comic naïvete and thinking-man’s stupidity. You can tell he works hard at mis-pronouncing names, like say Matthew McConaughey’s (“McConno-cha,” “McConnocheee,” “McConnogay”). His childish arrogance, while not endearing, is audacious in that so-rude-it’s-funny way. Zach tells a documentary crew that he wanted to call it “Betwixt Two Ferns”, but thought it was too highbrow for the public. He expresses anguish over trivial things, like his precious fern being run over, that recalls Steve Martin’s turn in The Jerk. Between Two Ferns: The Movie has the potential to go down as Galiafanakis’s gesamtkunstwerk.

Sub Titles: Aukerman and Galifianakis are the credited writers, and while one can only surmise designers and interns and consultants helped with the copy, it’s worth giving it up to everyone involved in writing the dumb cue cards for each celebrity. A few of note, that made this critic laugh at unreasonable length?

The Verdict: For a victory lap, the joke lasts just long enough. The gag-to-miss ratio will be incredibly high, even for those that care not for things like “story”. Galifianakis delivers a reminder of just what makes his brand of comedy so unique, special, and even a little daring.