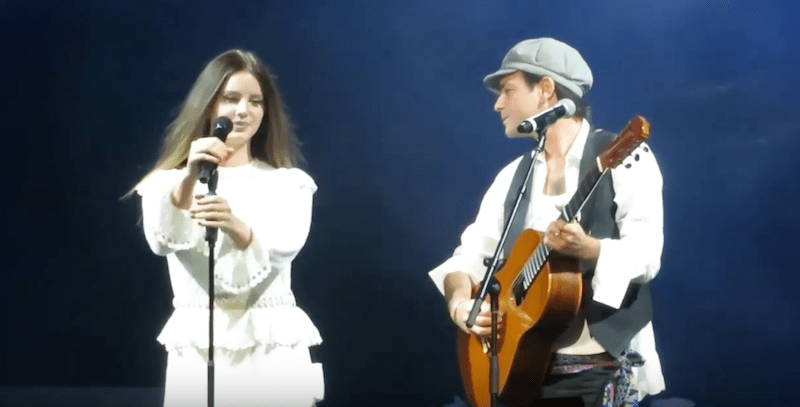 Lana Del Rey’s show in New York on Saturday was surprisingly filled with the offspring of icons. While performing at the Jones Beach Theater, the Norman Fucking Rockwell! singer welcomed out both Leonard Cohen’s son, Adam, and Sean Lennon, the son of Yoko Ono and John Lennon.

As the concert happened to fall on what would have his late father’s 85th birthday, it was fitting that Cohen was the first to join LDR on stage. Together, they delivered a soft, acoustic rendition of the classic “Chelsea Hotel No. 2”. Del Rey covered the song herself back in 2013, and the pair previously performed it back on the one-year anniversary of Leonard Cohen’s death.


Later during the set, Lennon teamed with Del Rey to sing their collaborative track “Tomorrow Never Comes” off 2017’s Lust for Life.

Watch video of both guest appearances below. Last night’s concert marked the kick-off to her “Norman Fucking Rockwell Tour”, and you can grab tickets to all her upcoming dates here. Update, October 7th: LDR brought Cohen out again during a recent gig in Berkley, California. She also teamed with Joan Baez for a rendition of “Diamonds & Rust”, and ceded the stage to the folk icon for a cover of Bob Dylan’s “Don’t Think Twice, It’s All Right”.

In related news, a new posthumous Leonard Cohen album, Thanks For the Dance, will arrive in November.