Metallica Rose From Tragedy to Deliver …And Justice For All

Despite the inaudible bass tracks, the band's fourth album was a triumph 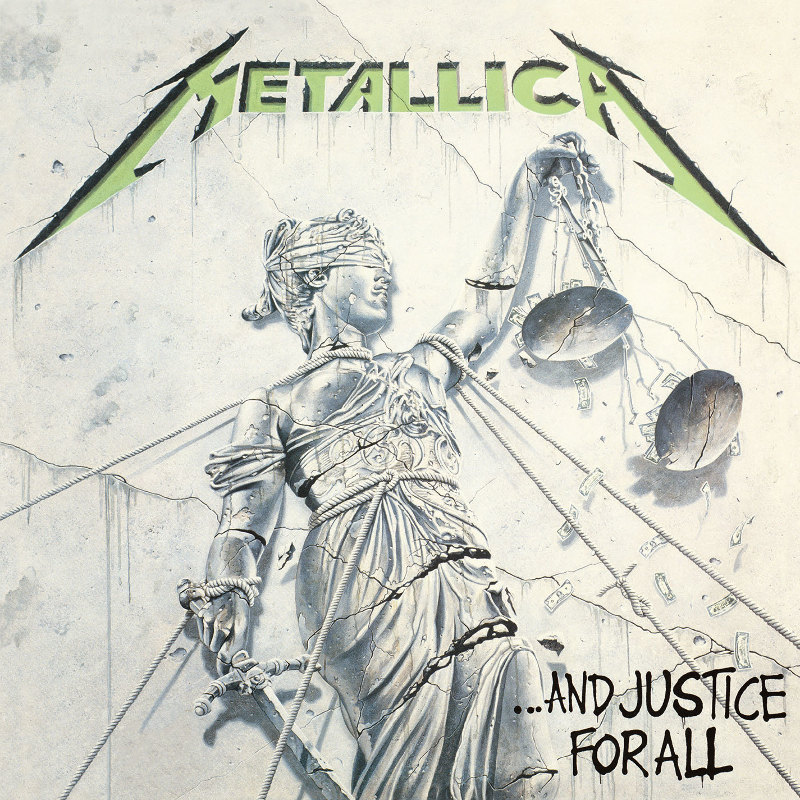 Everything in the world of Metallica changed on the morning of September 27, 1986. The band would face additional dramatic shifts after that, but on the E4, a mainline highway that runs the length of Sweden’s eastern coast, the most tragic moment in their history took place. It was just outside the city of Ljungby that the tour bus Metallica were riding in skidded off the road. Bassist Cliff Burton was thrown through a window as a result and the vehicle landed on top of him, killing him instantly.

Many bands have had to reckon with the death of one of its members, either letting that loss be the catalyst for their dissolution or slotting another person into his or her place and soldiering on. The latter is the course that Metallica chose, bringing in Flotsam and Jetsam bassist Jason Newsted to fill Burton’s tattered Converse All-Stars. But something about the loss of their friend and bandmate shifted the power and creative structure of Metallica.

In both areas of Metallica, drummer Lars Ulrich and frontman James Hetfield took a firmer grip on the reins. As journalist Mick Wall told the writers of the heavy metal oral history book Louder Than Hell, “[Metallica] carried on because that’s what Ulrich and Hetfield wanted … I have serious doubts that ‘The Black Album’ would have happened had Burton not died.”

Before they could get to that point though, the band had to make a statement. Something bold and technical that would demand every last ounce of their compositional will, even as they presaged a future of more measured tempos and more visibility to the cultural world. According to guitarist Kirk Hammett, in a 2017 interview with Rolling Stone, when Metallica went back on the road in 1987 to continue promoting Master of Puppets, “we were a little more mature. We were a bit more focused. We were also playing well. And out of that desire to play well came …And Justice For All.”

The band’s fourth studio album, released on September 7th, 1988, proved to be more than just a showcase of their instrumental proficiency as Hetfield and Ulrich — who arranged and wrote the core of every song on the album, save for “Blackened” — built multiple twists and time signature changes into each song. They could still thrash with the best of them (“Dyers Eve” still has the power to turn your bones to jelly) but they were more willing to slow down and let the music breathe a bit. Their New Wave of British Heavy Metal influences were taking a much more prominent role.

Everyone involved rose to the occasion on …And Justice. Hetfield turns in his fiercest pre-“Black Album” vocal performances and Ulrich drums like a man possessed, leaning heavily into his double kick drum assault. (Credit producer Flemming Rasmussen for giving everything that vital and vicious bare bones snap.) Then there’s Hammett, whose leads in each song are some of his most inventive — like the pealing tones that give way to fleet runs on “Harvester of Sorrow” or how he slices through the chugging train of “The Frayed Ends of Sanity” with zig-zagging efficiency.

As has long been discussed over these past three decades since the album’s release, the one element of the group’s sound that was almost entirely missing is Newsted. His bass playing is mixed so low as to almost be inaudible. It’s an issue that has caused a lot of debate, among fans and even among the members of Metallica’s teams. To hear Ulrich tell it, they were just so stoked on the sound of the guitars and drums that they cranked everything that much louder, drowning out the bass.

But according to Steve Thompson, the engineer who mixed the album, he was apparently told by Ulrich to push Newsted’s playing as far down in the mix as possible, and then go 5 db lower. Was it a slap in the face to the new guy or just egos holding sway? There are no solid answers from anyone to be found. Instead, try and track down some of the remixes that fans have done of the …And Justice sessions, or some of the live recordings from this era, to get a sense of what might have been.

The undeniable truth of this album is how quickly it rocketed Metallica into a new income tax bracket. The band was already one of the most successful thrash metal bands on the planet, but this one turned them into crossover heroes. Much of that can surely be attributed to the decision to finally concede to making a music video for one of their singles. The clip for “One” went quickly into heavy rotation on MTV, joining with Living Colour’s “Cult of Personality” and everything Guns ‘N’ Roses was churning out in ushering a new era of heavy rock in the mainstream. Amazingly, ...And Justice For All lost out to Jethro Tull for the first-ever Grammy Award given out for metal, but the Recording Academy made up for it the next year by awarding Metallica a Grammy for “One”.

The only lingering question anyone might have about this period is to wonder if Metallica would have ended up at this point in their career had Burton lived. To think of what Burton might have done with this same material or how he could have injected his own music into this heady mix is a bewildering train of thought to follow.

It’s also a pointless exercise. For good and for ill, Metallica burst through a new door of musical perception with ...And Justice For All. A few years later, they would release the biggest-selling metal album of all time, and nothing about the world of rock music or their lives would ever be the same after that.