Monster Was the End of R.E.M. as We Knew Them 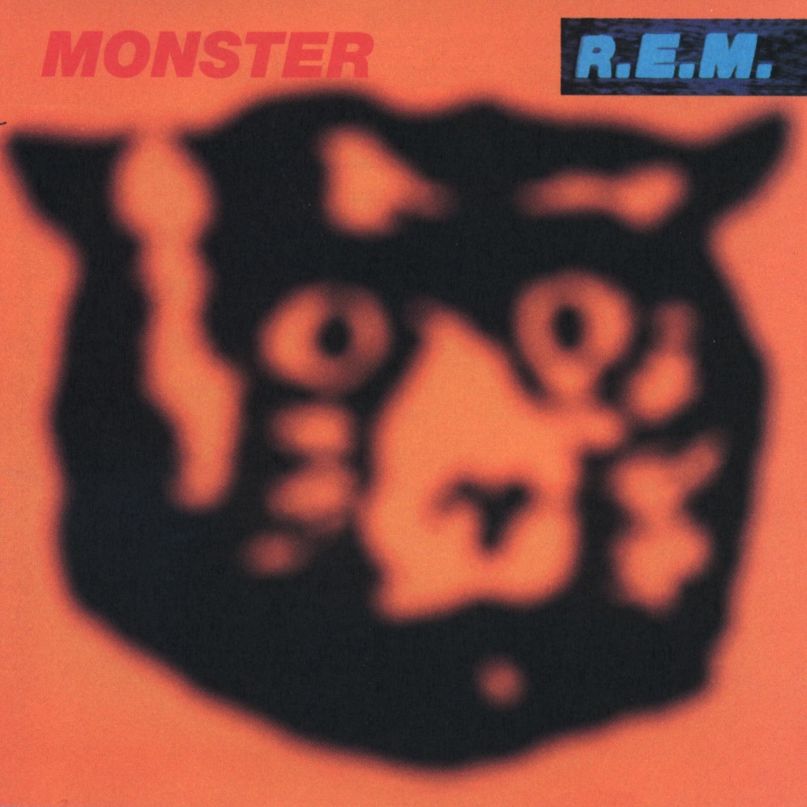 When asked in an utterly bonkers interview with Buzzfeed in 2013 if he was an R.E.M. or Smiths person (they aren’t mutually exclusive, but they certainly do have rather distinctive groups of hardcore fans that differ significantly from one another), Deerhunter’s Bradford Cox unequivocally chose R.E.M. and called them “a great American band.” When the interviewer commented that many didn’t view R.E.M. so reverently, particularly those under the age of 30, Cox pithily indicted their capriciousness, responding, “Well, people have short memories.” And the public’s amnesia, if it has indeed erased R.E.M.’s greatness from the history books, is alarming, considering the colossal impact they made on the world.

Examining Monster, the band’s ninth album, their most polarizing work, and the release that began their precipitous commercial decline, one thing that’s rarely mentioned is how utterly out of time and place it sounds, making another aspect of Cox’s statement very germane. They weren’t an “American” band anymore. They belonged to the world, playing stadiums, eschewing the pastoral folk rock indebted to The Byrds, The Velvet Underground, Ramones, Patti Smith, and Television in their early years in favor of borrowing more assertive moves from the glam rock beloved by the band in their youth, nearly all of it British — Roxy Music, T-Rex, Mott the Hoople, David Bowie, The Stooges, and Iggy Pop, usually spiritual influences, but here sonic touchstones.

(Read: Every R.E.M. Album from Worst to Best)

Monster was R.E.M. at their most abrasive and polarizing, but it sounds even more vital and relevant in 2019. Its greatest strength lies in its headlong dive into such provocative subject matters. Initially, it was dismissed and misconstrued, but now, in an era in which sexual complexity and gender fluidity are widely discussed and embraced more than anyone could’ve anticipated in ‘94 (a very difficult time for the LGBTQ community) with intolerance operating as the rule and not the exception, Michael Stipe’s pushing of these boundaries seems even more astounding, and he brazenly did so in a very public manner throughout the album, in interviews, and on the album’s tour. This likely cost them some fans in the US, especially, but R.E.M. didn’t care. They knew some things mattered more than sales, and their integrity endeared them to an equal number of fans. Stipe most directly captured his ethos of “labels being for canned goods” vis-à-vis sexuality and gender on “King of Comedy” as he acerbically taunts, “I’m straight/ I’m queer/I’m bi,” an evisceration of treating sexuality in a reductionist, binary manner.

Monster was occasionally dismissed as detached upon release, its assumed characters sacrificing the human connection that had endeared R.E.M. to numerous fans. But now, given that it feels so steeped in our epoch of alienation and anomie — qualities largely inculcated into our psyches via social media and online chatting, engendering an overwhelming sense of loneliness and disconnection from humanity — it serves as a desperate plea for human connection. It’s a flare sent long ago warning us of how much we could lose and what can still be saved and perhaps gained, imparting the hope that redemption is potentially always just around the corner, their joyful racket conveying the sheer conviction of their beliefs.

Stipe may preen ecstatically on the glam romp of “Crush with Eyeliner” that he’s gonna “cop an attitude and fake her,” but that’s pure pop as play, T-Rex via Roxy Music levity goofs. “What’s the Frequency Kenneth?” still kicks off the album with an ebullient bang worthy of The Stones. Wah wah washes and tremolo shimmers jolt as forcefully as ever. Its pop culture references are rendered more obscure, hammering home the point of the song, which is one of desperately trying to remain vital and human in a rapidly evolving world that feels increasingly Blade Runner-esque. One where our increasingly polarized income chasm creates a sense of less value and relevance daily with even greater efficacy.

The album’s moment of lament and ache remains “Let Me In”, the band’s tribute to Kurt Cobain, a deluge of regret and grief captured as a wall of sound wash of electric guitars foregrounds alongside Stipe’s anguished wail. And this was right after River Phoenix, a close friend of Stipe’s, had also died tragically, which threw the singer into a long bout of writer’s block. This knowledge makes the album’s thematic consistency even more surprising, as it never wallows in self-pity or treads over ground previously covered, and “Let Me In” isn’t tawdry, exploitative drivel. It’s a poignant, near-fever-dream-territory take on Cobain and his legacy and connections to Stipe and the band. Still, the album is guided by something R.E.M. had a surfeit of when they excelled the most — instinct, intuition, their backs against the wall, and it’s a very stark warning of the dehumanizing nature of modern culture, with tremendous foresight on how vulnerability, sexuality, and gender were evolving very rapidly.

R.E.M. would never return to the rarefied commercial and cultural strata they occupied circa Monster, but they still had a hell of a run, one that we can still celebrate and be grateful for. And there’s no need to bemoan their departure or even the loss of their generosity of spirit and hope that they imparted. Instead, other bands need to emulate them. We desperately need someone out there to talk about the passion and speak up for the downtrodden in our era of rampant avarice and selfishness in which human connection is jettisoned in favor of isolation. We need vital artists with powerful voices carrying the torch of hope and generosity so long-held by R.E.M. more than ever now, which is perhaps their ultimate legacy. They cared deeply about issues of great import as human beings, compassionately and empathetically, while impacting us in ways we can’t even begin to understand.