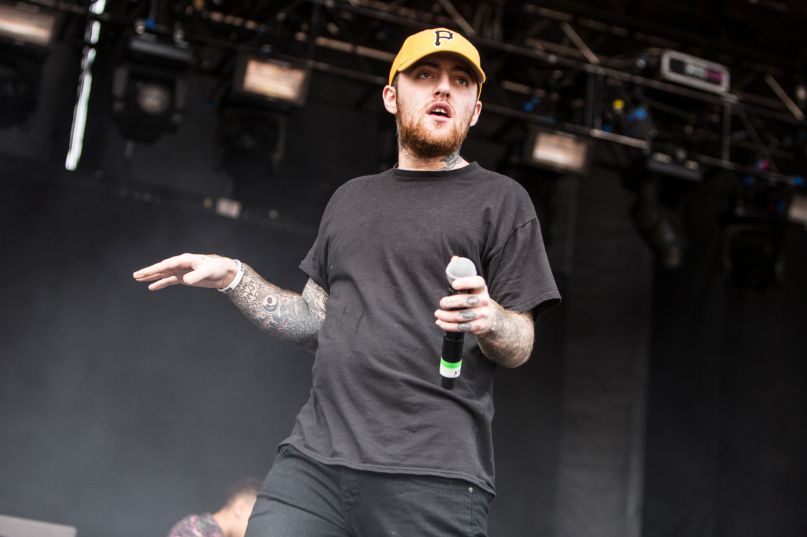 Mac Miller died on September 7th, 2018. We remember him today through his work.

In the wake of Mac Miller’s death a year ago, the comment sections of his YouTube and Soundcloud channels became a collective and never-ending eulogy, a group therapy session, a room for confessional, a place for mourners to speak to Mac on a rough day — a space for the deluge of emotion to sit, heavy and throbbing, never quite simmering down. His premature passing created a scab that never quite healed, one that reopens at a slight skimming against a surface. “Afternoon Mac came to chill for a little,” a comment from last week says. “I come here to hang out with Mac at least once a day,” another from a month ago. “Lost my pops and Mac in the same year; life moves too fast,” from this week.

To be a fan of Mac Miller during his lifetime largely meant watching him fight to overcome his demons because Miller struggled aloud. His songs were riddled with aching; his battle with staying on Earth was present at every turn. To look back and trace the months leading up to his death is to go down an excruciating painful path, one that shows a man in the midst of a seemingly eternal struggle. One of the most heartbreaking moments came just a month before he died, as he performed for NPR’s Tiny Desk series: With glazed over eyes, he sang, “Nobody told me being rich would be so lonely.”

And yet heavily contrasted with those moments of pain was Miller’s bursting effervescence, moments of pure jubilation, of his contagious personality and unruly talent. There were hardly any unkind words spewed in his direction, mainly because there weren’t many to say. The list of things to miss about Miller is boundless: Watching him perform, his hands fidgeting so quickly it looks like a computer glitching, his impressive collection of oversized grandpa sweaters, his releasing of random outtakes on SoundCloud, his drive to build up other musicians’ careers, his goofiness, his sense of humor, his love of the music.

So, there’s no dancing around it: His death left a gaping chasm in the world, and perhaps the only solace is the massive collection of music he left behind for us to cherish. To rank his best songs would be a disservice to those left out, so here are 10 tracks simply worth savoring.

It was Valentine’s Day six years ago, and Mac was on a plane — the whole day. So, how did he spend his surplus of downtime? Writing this 21-minute ballad that he clarifies as “not a love song.” This is a fuck song,” he sings.

The track really covers a lot of ground: From Mac explaining why no one wants to have sex with ScHoolboy Q to unpacking his moral dissonance with eating cheeseburgers. “I came across one of those commercials for sick dogs, and I hate that shit. I hate eating a cheeseburger and watching a video about animal cruelty because I know that shit happens, but I like to forget it and enjoy my cheeseburger because I can’t help but like it, girl. I know they treat those cows like shit, and I ain’t really with that,” he relays with the generous help of T-Pain-style Auto-Tune. It’s weirdly sexy, but entirely hilarious. Most importantly, though, it encompasses most of Mac’s best qualities: his uncanny ability to make people laugh, his musical and emotional connection with other rappers he worked with, and his, um, romanticism.

There’s something really haunting about Mac covering Elliott Smith, another beloved musician who left us too soon after a life spent creating amazing music and battling himself. In a heartbreaking act of foreshadowing, Mac takes what is originally a bare-bones song and fills it with life, adding density and layers of intensified feeling. Although it’s altered to match Mac’s sound, it still maintains the devastating message: “Be forever with my poison arms,” Mac sings almost like a lullaby.

The first song on his debut studio album, “English Lane” opens with the sounds of children playing in a park over fluttering, celestial instrumentals. At under two minutes, it was once a  brief ode to his favorite park. It’s still that, of course, but now, it’s taken on a new meaning: “Sometimes I just want to go back to Blue SIide Park, the only place I call home,” he repeats. Listening to it without Mac here, though, creates an immeasurable feeling of nostalgia for a simpler time, for a time when he was alive.

Two legends: one track. On “Pet Sounds”, the late Sean Price and Mac deliver an effortlessly smooth but threatening message: “I’m worldwide, but I smack clowns local,” Price raps over an irresistibly jazzy and industrialized Nottz beat. It’s on this track that Mac delivers one of his most jarring lines: “If I’m gonna kill myself, then I’mma do it big.”

In the first 10 seconds of this live recording, we’re presented with almost all of the infamous Mac-isms. One of his beloved “ums”, a sniffle, his asking, “right?” through his signature mumble, a habit that makes it sound like his cheeks are stuffed with a few cotton balls, and of course, a contemplative statement that clues us into what he’s going through: “Sometimes I wonder who the fuck I am,” Mac exclaims — all before the track has even truly started.