Scarlett Johansson on Woody Allen: “I believe him, and I would work with him any time” 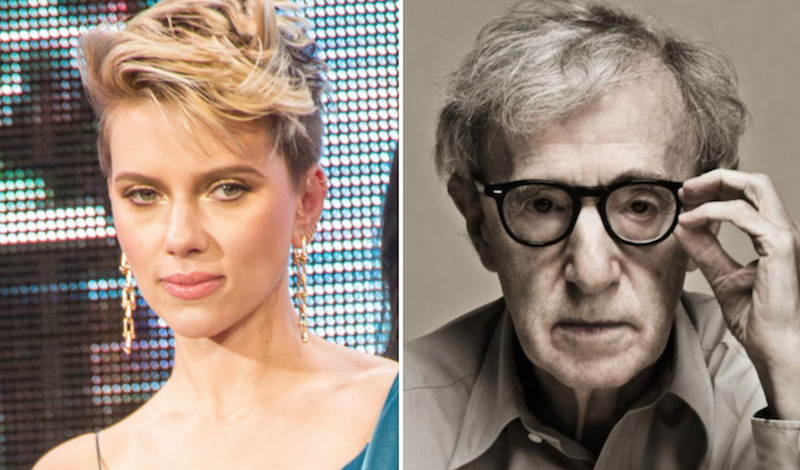 Scarlett Johansson has said she believes Woody Allen did not sexually abuse his adopted daughter, Dylan Farrow. In a new interview with The Hollywood Reporter, Johansson defended the embattled director, stating, “I love Woody. I believe him, and I would work with him any time.”

In 1992, seven-year-old Dylan Farrow accused Allen of molesting her. Although criminal charges were not filed at the time, the allegations were revived in the wake of the #MeToo movement. Others in Hollywood have condemned Allen and even donated their salaries from his films to anti-harassment organizations. However, Johansson, who starred in Allen vehicles such as Match Point and Vicky Cristina Barcelona, had remained silent until now.

In the new interview, Johansson said her opinion formed from dialogue with Allen himself:

“I see Woody whenever I can, and I have had a lot of conversations with him about it. I have been very direct with him, and he’s very direct with me. He maintains his innocence, and I believe him… It’s hard because it’s a time where people are very fired up, and understandably. Things needed to be stirred up, and so people have a lot of passion and a lot of strong feelings and are angry, and rightfully so. It’s an intense time.”

Last year, Johansson took a very different line when addressing allegations against James Franco. In a speech at the Women’s March, she called out Franco, who’d recently been accused of sexual misconduct, for wearing a #TimesUp pin at the Golden Globes. “How could a person publicly stand by an organization that helps to provide support for victims of sexual assault while privately preying on people who have no power?” she said (via Vanity Fair).

The comments on Woody Allen come amid a distribution battle over his latest film, A Rainy Day in New York, which features a sex scene between a 44-year-old man and 15-year-old girl. Amazon was originally set to release the movie, but chose to shelve the film as abuse allegations resurfaced. Allen sued the company and the flick is now set for release in Italy.

For his part, Allen continues to assert his innocence. Update: Allen has once again defended himself, saying he’s “done everything that the #MeToo movement would love to achieve.” Farrow has also responded to ScarJo’s remarks.