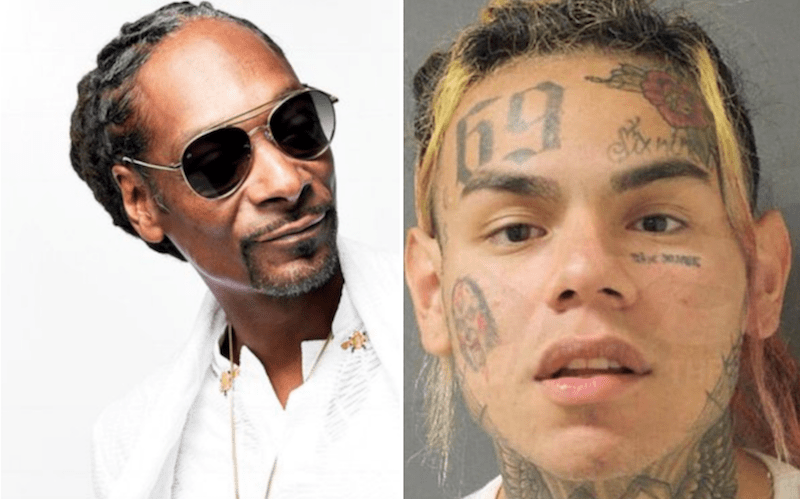 Few rappers have courted a hardcore gangster image more aggressively than Tekashi 6ix9ine, and no one has demolished it faster. His quick turn around from one of SoundCloud rap’s biggest stars to the world’s most infamous snitch by cooperating with authorities has led many to label 6ix9ine a hypocrite. Inevitably, he’s become the target of diss tracks and memes — as well as the mocking ire of Snoop Dogg.

Snoop, of course, knows a little something about going down with one’s mouth shut. Beyond beating a rap for murder, the West Coast MC has some close friends who have told no tales and gone to prison for it. Hardcore friends. Bad ass felonious friends. Friends by the name of Martha Stewart. In 2004, Martha Stewart served five months in a correctional facility on charges related to insider trading.

On Monday, Snoop posted an Instagram picture of Stewart alongside one of 6ix9ine. “As we watch Tekashi 69 (or whatever his name is) snitch on EVERYBODY, I invite you all to remember Martha Stewart snitched on NOT ONE soul during her trial,” Snoop wrote. “Baby girl kept it 10 toes down and ate that prison sentence by herself, like the true baddie she is.”

This is not the first time Snoop Dogg has taken social media shots at 6ix9ine. On September 19th, Snoop Dogg posted, “How you gone be a rat & a goon? Aww, cuz you a racoon [sic],” with a caption that read raccoon emoji plus rat emoji equals 69. That same day, he shared this self-referential gem:

With all of the negative attention on his cooperative attitude, it’s no surprise that Tekashi 6ix9ine is expected to enter witness protection. Of course, that’ll be hard to do with all those face tattoos, especially since he’ll have to pay for their removal himself.