FKA twigs Endures and Transcends on the Soul-Baring MAGDALENE

The performer undergoes a metamorphosis after emotional and physical trauma 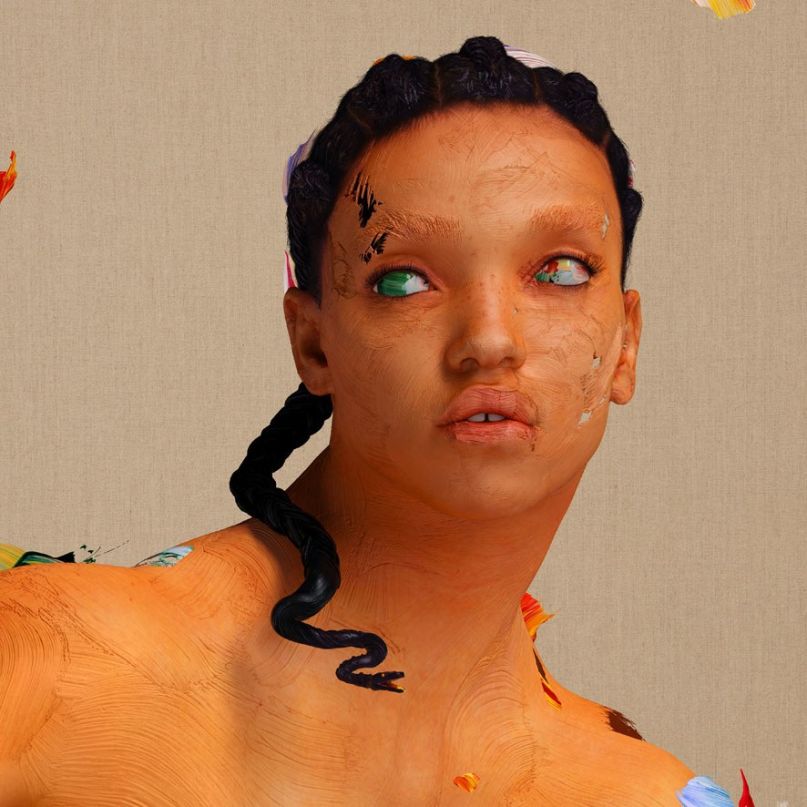 The Lowdown: FKA twigs has met her period of transfiguration. At a glance, the artwork for twigs’ latest effort, MAGDALENE (painted by London-based artist Matthew Stone), can be interpreted as a DMT-fueled apparition, but through the course of nine tracks, twigs’ raw portrait becomes epiphanized.

The singer has met her fair share of pain, both emotional and physical, following the course of a highly publicized breakup and remarkably healing after laparoscopic removal of six uterine fibroid tumors. Remember the Apple HomePod commercial with twigs dancing vivaciously in her tunnel-warped apartment? twigs was post-op, her stomach stitches nearly ripping apart, pushing her body to its extent to fulfill the vision of director Spike Jonze. At certain points, you can even see glimpses of twigs attempting to shield her torso. “Just when you think it’s really fragile and about to fall apart, there’s an absolute defiance and strength in a way that my work’s never had before,” she recently told i-D. There’s no limit FKA twigs hasn’t surpassed, and on the soul-baring MAGDALENE, the singer manages the equilibrium of an otherworldly stratosphere and her most human endurance.


The Good: Through her enviable sopranic range, FKA twigs’ newest facet,  ‘Magdalene’ — separate from her 2015 ‘Melissa’ persona — comes alive. Biblical accounts portray Magdalene as being redeemed from hosting evil spirits, but twigs embodies her spirit as a healer, perhaps even a healer of self. Without aptly seeking validation in music, FKA twigs refines her artistry as dynamic, theatrical masterpieces, in which she takes center stage. On “home with you”, twigs puts her heart on the line to save her partner, nearly dismissing her own needs before realizing that she’s also in a state of loneliness, bearing a fruit basket of misfortune. Of course, she doesn’t mind the risks, even if it puts her through agony (“Breathe in/ Breathe out/ Pain/ No no novocaine/ Still maintain”).

After collaborating with A$AP Rocky on “Fukk Sleep” from his third solo album, Testing, twigs follows her slew of rap collaborations with assistance from Future on “holy terrain”. He’s noticeably absent from the single’s video, where twigs majestically brings the dance floor to the desert. Though the track opens with the rapper’s signature ad-libbing — this time, referencing the blasphemy of attending church with drug money in tow — he unashamedly calls to twigs as his saving grace (“Make me stronger when I’m weak, yeah/ We die, we die together the prophecy complete, yeah/ We get high, we touch the sky until we decrease, yeah/ And if you pray for me, I know you play for keeps, yeah”). twigs obliges his sentiments, once gushing to i-D about loving “sad Future”.

If MAGDALENE was revamped as a musical production, “Fallen Alien” would be its climax. With child-like background vocals, FKA twigs reaches her manifesto in love and salvation, threatening to have her lover beg for repentance. Channeling the album’s namesake, the feminist-driven “mary magdalene” finds twigs regaining her strength, in exchange for sacrificing her fortitude to nurture those beyond herself.

The Bad: For those expecting a mid-tempo sound, look to FKA twigs’ earlier works, as her internalized morose lingers throughout MAGDALENE. Album opener “thousand eyes” reels listeners in with staccato vocals and repetition, but this consistency returns as twigs races against time on “sad day”. The mood of MAGDALENE is entirely forlorn as a testament to the three-year hiatus of twigs, but there’s virtually no window for emotional salvation other than the nearly self-sacrificial “mary magdalene”. Lying in a depressive state of longing on “daybed”, twigs maintains as much banal simplicity as a Rupi Kaur poem (“Jaded is my father/ Childlike is my answer/ Careful are my footsteps/ Possessive is my daybed). Despite her consistent mind-bending production, the overlying, ominous tone of MAGDALENE could lull fans to sleep before it ends. Perhaps twigs knew this would be a possible criticism, purposely intending for MAGDALENE to be brief.

The Verdict: FKA twigs is as unwavering as her traditional mouth-agape pout, but on MAGDALENE, twigs makes room to project her resilient growth. In the provocative visual for “cellophane”, she descends from a pole dancer to clashing with herself in sphinx-form, facing the inevitability of starting over. It’s a metamorphosis that twigs embodies on MAGDALENE, using discipline as a template for her art after undergoing her most public tribulations. While concise in length, MAGDALENE paces FKA twigs through the unguarding of her traumas, ceremoniously giving way for her next act.