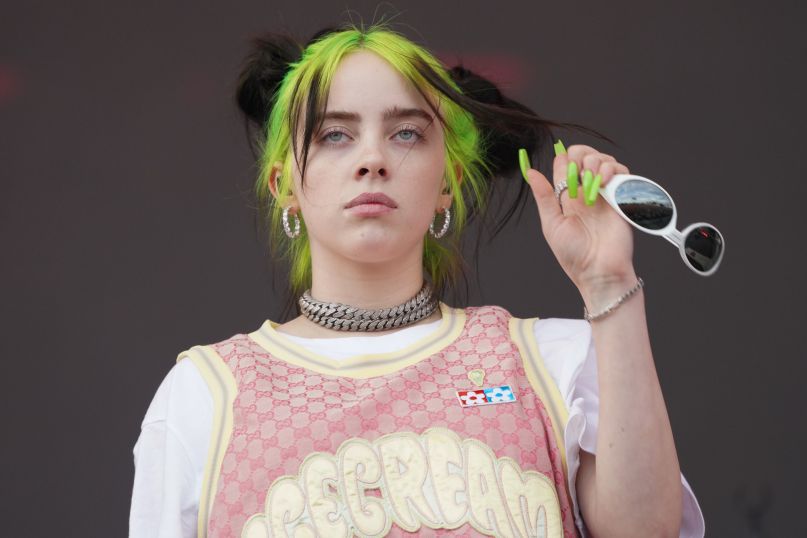 Teens. This specific subset of free-thinking fringe-drifters who loudly balk at perceived artifice are much better at sniffing out the synthetic than they’re often given credit for. They’ve become laser-focused on predicting the “next big thing” across pop culture lines, and they’re usually right. Outlandish as their forecasting may be at times, the rest of the world typically follows suit soon enough.


It makes sense then, that in 2019 — as the world falls apart in succession all around us — the overproduced pop persona is out, and Billie Eilish is in. The teens first deemed it so; it must be true.

It has been said, or at least inferred, that the 17-year-old pop phenomenon — who co-writes her own songs alongside her brother, Finneas O’Connell — calls all the shots in her burgeoning career. And when compared to her contemporaries, one thing is clear: Eilish has consciously opted out of conventional, taking the road less traveled by her fellow pop peers. It lives in the very lining of her skin, this subversive approach to pop stardom, her insistence on cutting through the shellac and turning up the house lights. She approaches pop with a punk attitude: Where her music is all low-thrumming synths and gentle, looping vocals, Eilish’s aesthetic is that of a sanatorium wiped clean.

She slips into the comfort of sneakers when she performs, dyes her roots neon green, keeps her nails long and sharp. Her music videos and onstage visuals — all muted tones and unnerving imagery — act as mini-creature features, bizarre horror flicks that depict the kinds of nightmare scenarios your masochistic brain sometimes unleashes instead of serotonin. Syringes stand at attention like ghastly acupuncture, skimming the surface of Eilish’s back. Black liquid pours from her eyes in a persistent stream down her pallid face. Crosses hang upside-down, bodies contort in mid-air, insects scatter everywhere, all at once. The atmosphere at a Billie Eilish show feels devilish and rebellious, like an unholy mass.

So it is, too, that Eilish shies away from figure-hugging silhouettes, shielding her body from outside observation with oversized garments hanging stock-still around her. She graced the pages of Vogue Australia earlier this year, sinking deep into a voluminous, purple puffer across its cover. Two months before that, she appeared onstage beneath the hot Coachella sun, wearing a pair of monstrous, furry blue pants, one fleece layer away from debilitating heatstroke.

Her t-shirts, button-downs, sweatshirts, tracksuits, bucket hats, and bracelets are layered so thick she perpetually looks engaged in Michelin-man cosplay, often emerging onstage and in photo shoots in a marshmallow behemoth of busy patterns. This is not an insult, but a nod to Eilish’s intention. Eilish deviates from typical pop platitudes, opting to shares as little of her body with the world as she’d like.

Instead, she gives unbridled access in the form of her music and sometimes her thoughts, the inner-workings of her oddball teenage brain spilling out into the world over genre-melding tracks. Buoyant love songs are damned: Eilish’s brand of weirdo goth-pop cascades beyond mere basic label billing, bringing with it the kind of searing authenticity that appeals to listeners still intent on letting old-fashioned tremors like worry and fear and paranoia wreak havoc on their gentle psyches.

All of this is apparent in print, but a static image is easy enough to sell without the risk of illegitimacy stinking it up. It’s Eilish’s onstage affectations that effectively silence any hypothetical naysayers from calling bullshit on her shtick because it’s clear there simply isn’t one.

There are no tightly choreographed sequences here, no rehearsed alter ego, just a girl awake and moving with limitless energy beneath animated terror sequences, bounding across the stage with the kind of intoxicating confidence often reserved for more seasoned performers. Eilish is soft-spoken between songs, but then the bass kicks in and she shoots up and across, a wrecking ball pummeling her own ankles to putty.

It is here, inside her live shows, where her deft skill as an artist, not just relegated to pop, shines brightest. From hip-hop to trap to indie rock and beyond, Eilish masterfully engages each genre, proving her worth as the distorted new face of pop, echoing the nuance inherent in human taste. No one is just one thing, after all.

Most surprising — at least for those who have failed to pay attention — is her delicate vocal work, unfairly criticized as a mere breathy whisper. So much of what Eilish does, her style of singing, could fit inside the smokey tendrils of an underground jazz club. Her vocals are sad and lilting and real, possessing a soft, understated power that demands you listen through the muck. She highlights this when she sits on a stool or suspended, mid-air, on a bed, allowing the intimate moments to rightfully overshadow an otherwise berserk, high-energy show.

Eilish’s appeal stems from this layered approach, from offering something weird and righteous and nuanced to listeners who have been so steeped in similarity. Praise be to Eilish, then, for carving out another path for us all.

Billie Eilish’s debut album When We All Fall Asleep, Where Do We Go? is out now. You can get tickets to her upcoming shows here.