From homemade batteries to ricin cigarettes, it's never a dull moment on Gilligan's Island 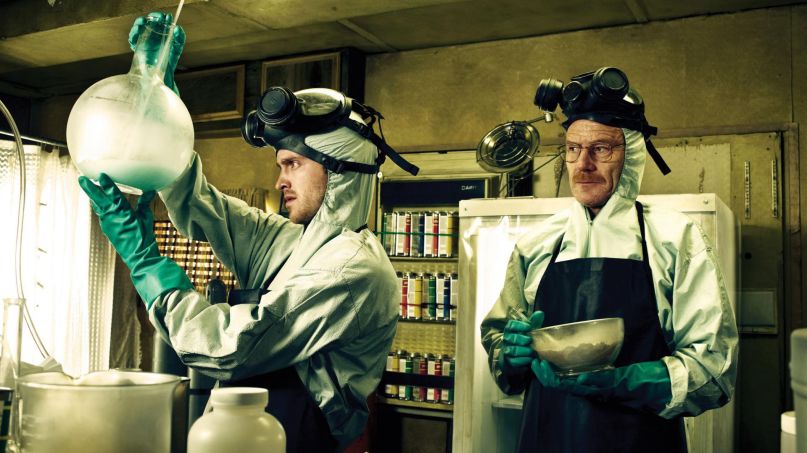 Whatever happened to Jesse Pinkman? Finally, after all these years, we find out with El Camino: A Breaking Bad Movie. To celebrate, Consequence of Sound is publishing several articles straight outta New Mexico. Today, Editor-in-Chief Michael Roffman, Alex Huntsberger, and Andrew Bloom celebrate the ingenuity of Vince Gilligan’s series by revisiting its greatest schemes.

Vince Gilligan loves a good idea. Like David Lynch, the guy tends to wait for a fresh fish to catch, and he’s found a whole school of them in New Mexico. For over 10 years now, the veteran television scribe has turned Albuquerque into an enviable writer’s workshop, one that caters to his Erector set-like storytelling. Be it Walter White’s seemingly infinite knowledge of chemistry or Saul Goodman’s Houdini-esque wizardry amidst the legal system, there’s always a sense of ingenuity at hand on Gilligan’s Island, and that’s partly why both of his AMC series are so goddamn re-watchable.

That’s not to discredit Gilligan’s strict constitution for narrative, either. Hardly. If anything, these ideas wouldn’t nearly be as effective if not for the razor-sharp storytelling that wires each and every blueprint. Because without our affection or interest in his rogue’s gallery of characters, both Breaking Bad and Better Call Saul would likely boil down to intriguing half-hours of television on either The Discovery Channel or C-SPAN, respectively. No, we ooh and ahh not only because we want these characters to succeed, but because we believe these characters can succeed. That takes talent.

Looking back on Breaking Bad, specifically, especially as we head into El Camino, we’re once again fascinated by the quirky ingenuity of so many of these plans and schemes. That’s why we opted to collate 10 of our favorites. Not because we love a good list — c’mon, who doesn’t love a good list on the Internet? — but mostly as a way to showcase Gilligan’s craft. So, before you reunite with Jesse Pinkman on Friday, take some time to consider how we got there, not through actions, but through good ol’ fashioned planning. At the very least, you’ll remember how to jumpstart an RV.

The One Who Knocks: Walter White (Bryan Cranston)

“How Did Everything Get So Screwed Up?” (Context) After narrowly escaping death by the hands of their captor Tuco Salamanca (Raymond Cruz) — thanks to ASAC Schrader (Dean Norris) — Walt and Jesse (Aaron Paul) have to account where they’ve been all this time. For Jesse, that’s easy peasy, and he’s more or less tasked of going home and cleaning up. For Walt, however, he has a family to answer to, which is why he ingeniously drums up a fugue state narrative for himself. Rather curiously, he stumbles into a distant grocery store and strips off his clothes, to the horror of every New Mexico shopper.

“Yeah, Science!” (The Scheme) Okay, so it’s not Walt’s finest hour — at least, not for his own reputation — but it’s a stroke of genius. Upon being hospitalized, Walt claims he has no recollection of where he’s been for the last few days, laying blame to his medication and chemotherapy. Although the doctors find no reason for such a fugue state, they more or less buy the story, insisting he stay with them for fear of another episode.

“We’re Done When I Say We’re Done!” (Consequences) Hospital bills, a panicked family, and mild doubts. But hey, no one suspects he’s involved with Salamanca, and Hank even walks away a hero, despite inheriting a crippling case of PTSD (and Tuco’s teeth).

Lab Analysis: Seeing how Walt has to come clean to Doctor Chavez — fans of Buffy the Vampire Slayer might recognize actor Harry Groener as Mayor Richard Wilkins (spooky) — the plan isn’t 100% foolproof. But to his credit, Walt never truly confesses, copping to traditional father-husband woes, the likes of which any doctor probably might understand given his position. If anything, the only anxiety to stem from all of this is worn by Hank for his aforementioned PSTD, and Jesse, whose cleanup is only resolved due to Hector Salamanca (Mark Margolis) refusing to cooperate. Ding, ding, ding, indeed.

The One Who Knocks: Walter White … and André Cassagnes

“How Did Everything Get So Screwed Up?” Can’t cook meth without that crucial ingredient: methylamine. Unfortunately, as we learn multiple times throughout Breaking Bad, methylamine isn’t easy to come by; it winds up being the plutonium for this drug-dealing Doc and Marty. Their first realization of this surfaces late into Season 1, when Jesse manages to get every item on Walt’s cooking list, save for the big M. Walt’s furious, but Jesse has a solution — a chemical warehouse on the outskirts of town. The problem? It’s heavily guarded and secured by “one big ass lock.”

“Yeah, Science!” By remembering his World War II history, Walt is able to concoct a proper bomb with routine household items. But please, let’s not lay all the credit on Walt’s lap. Thanks to the work of André Cassagnes, who conceived of the Etch A Sketch in the 1950s, our high school chemist-turned-historian-turned-Tyler Durden has all the material he needs to make thermite without ever leaving Jesse’s garage.

“We’re Done When I Say We’re Done!” Not even cameras, nor a pesky realtor, can stop them from their work. The only real loser in this is the unlucky security guard who spends the night in a Port a Potty. The barrel, however, turns our duo into overnight winners.

Lab Analysis: If you didn’t gather, Walt knows his chemicals, and he especially knows how to make things pop. Gilligan proved as much in the previous episode, “Crazy Handful of Nothin”, when he armed his anti-hero with a fulminated mercury bomb. But the addition of a household object as rote as the Etch A Sketch really made Breaking Bad feel downright palpable — on the other hand, it also probably motivated half a dozen anarchists out there (win some, lose some). All joking aside, this kind of off-the-cuff engineering set a precedent for the series, giving it that Bill Nye edge that would give your own high school teacher a heart attack. Narratively speaking, the thermite brings Walt and Jesse closer together.

The One Who Knocks: Walter White, Mike Ehrmentraut (Jonathan Banks), and Jesse Pinkman, with magnets provided courtesy of Old Joe (Larry Hankin). Though, for once, it’s Jesse who has the scientific breakthrough.

“How Did Everything Get So Screwed Up?” After offing Gustavo Fring (Giancarlo Esposito) via Hector Salamanca’s wheelchair bomb and blowing up the Superlab, Walt and Jesse have one more loose end to tie up: The footage from the lab’s security cameras is is stored in Gus’s laptop … which just so happens to be in police custody. After convincing a very angry Mike not to murder Walt in cold (if well-deserved) blood and help them destroy the laptop, Jesse comes up with an idea: magnets.

“Yeah, Science!” Gus’ laptop is being stored in the Albuquerque PD’s evidence room. Since the trio can’t get into the room itself, they need a magnet big enough to wipe the computer’s hard drive from the other side of a brick wall. Enter: Old Joe’s giant junkyard electromagnet. After a successful test run, the team breaks into the APD parking lot and pulls up alongside the evidence room in their truck. With 42 car batteries providing the juice, they flip the switch and…

“We’re Done When I Say We’re Done!” Three things happen immediately: 01.) The laptop is wiped, 02.) The evidence room is wrecked, and 03.) The truck tips over. Whoops. The three crooks manage to escape, but they have to leave the truck behind, causing tensions between Walt and Mike to grow even tauter. Oh, and the evidence room chaos accidentally reveals Gus’ secret offshore accounts — including the one for Mike’s granddaughter.

Lab Analysis: Coming off the heels of Season 4, this scheme was a back-to-basics move by Gilligan. Science + crime = Great TV. And in classic Breaking Bad fashion, the scheme’s short-term success sows the seeds for its characters’ long-term downfall. Poor Mike. He really should have killed Walter White when he had the chance.

The One Who Knocks: Walter White, with a notable assist from junkyard legal adviser Old Joe and Saul Goodman’s (Bob Odenkirk) secretary

“How Did Everything Get So Screwed Up?” Hank has been staking out Jesse. When Walt learns of the surveillance, he decides to have the RV, and all the incriminating evidence inside, destroyed and turned into Chinese patio furniture. But after he alerts Jesse, the young man rolls to the junkyard and bursts into the RV to give Walt a piece of his mind, not even realizing that he’s drawn Hank right to them. With the two trapped inside their former makeshift workspace, and cornered by his brother-in-law, Walt has to figure out a way to get rid of Hank, not to mention the RV, without exposing himself or their criminal enterprise.

“Yeah, Science!” There are three big elements of Walt’s plan. First, stall Hank by convincing him that the RV is a domicile, not a vehicle, and thus he needs to get a warrant before he’s allowed to just bust it open and investigate. Second, play Cyrano de Bergerac with Jesse, letting him and Old Joe delay Hank with their legal arguments (and well-placed profanity) to keep Walt himself anonymous. Third, have Saul’s secretary call Hank while posing as an A.P.D. officer, telling him that Marie’s (Betsy Brandt) been in a terrible accident, so that he’ll bail on the stand-off to check on his wife.

“We’re Done When I Say We’re Done!” Hank runs off, and the RV, along with every little incriminating detail inside, is crushed into little tiny pieces, never to be seen again. But Jesse catches one hell of a beating for the ruse.

Lab Analysis: You can’t argue with results. This is one of Walt’s closer calls, but by crossing yet another line (this time, a familial one), he manages to buy the time he needs to dispose of the RV and walk away without revealing his identity or his crimes. Still, the collateral damage to Jesse has to count as a mark against this scheme, even if it might be preferable to jail time or worse had they been caught.

“How Did Everything Get So Screwed Up?” With no Superlab anymore, the fellas need a new place to cook — one that will keep them off the grid. Saul takes them on a tour of possible sites, none of which are acceptable. It’s only at the last place, a fumigation company called Vamanos Pest, that Walt has a sudden realization.

“Yeah, Science!”  Every Vamanos Pest tents a new house, Walt and Jesse set up a mobile meth lab inside it. This allows them to cook without worrying about weird smells or activity setting off the neighbors — the giant yellow and green tent covering the house provides the perfect cover. Plus, there’s an industrious member of the Vamanos crew, Todd, who seems very eager to please…

“We’re Done When I Say We’re Done!” The cooks themselves go great! The crew is making money hand over fist. Hell, once Walter kills Mike — and has Todd’s Neo-Nazi family kill Mike’s guys on the inside — the profits skyrocket. Jesse leaves? No problem. Todd is there to replace him. All in all, this scheme works about as well any scheme on the whole show.

Lab Analysis: An assessment of the whole thing: Most of the joy in Breaking Bad lay in Walt and Jesse trapping themselves in tighter and tighter corners — each one necessitating an increasingly elaborate scheme to break their way out. But the please of this scheme lies in its utter simplicity. Sure as hell beats a crappy RV in the middle of the desert.