It's his first ever Academy Award win 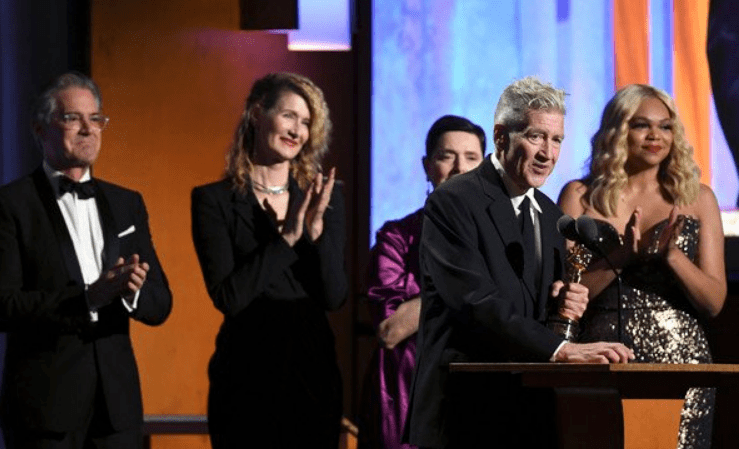 For the first time ever in his career, David Lynch has won an Oscar. The legendary filmmaker received the Academy Honorary Award at the Governors Awards on Sunday night.

Previously, Lynch earned three Academy Award nominations for Best Director (for The Elephant Man in 1980, Blue Velvet in 1986, and Mulholland Drive in 2001). His acclaim has been bolstered by creating the cult TV series Twin Peaks, releasing several solo albums, and authoring three books. But somehow, despite all of this, the surrealist had never got film’s biggest award to honor his influential status.

There to present Lynch his award were two of his friends and frequent collaborators, Laura Dern and Kyle MacLachlan. The pair recounted how they first met Lynch at a Bob’s Big Boy where he was drawing on the tablecloth with ketchup and his finger. “Most days you walk on to set, you will find David painting a wall, hand-making a prop, and seamlessly setting up a shot,” explained Dern.

(Ranking: Every David Lynch Movie from Worst to Best)

The crowd then welcomed Lynch with a standing ovation that lasted longer than his speech — in part because his speech consisted of only 20 words. “To the Academy and everyone who helped me along the way, thanks,” he said. “You have a very nice face. Goodnight.” Such a weird and blunt speech can come with different interpretations, of course, especially when it comes from Lynch. While nobody is sure whose face he was complimenting, The Hollywood Reporter believes he was referring to the award statue.

Meanwhile, fellow Honorary Awards winner and actor Wes Studi talked about Native American underrepresentation. American actress Geena Davis received the Jean Hersholt Humanitarian Award, and spent her time addressing the imbalance of gender in the industry. Screenwriter-director Lina Wertmüller asked to “change the Oscar to a feminine name” like Anna, a fitting declaration following Greta Gerwig and Jane Campion’s introductory words for her: “How do you correct centuries of patriarchal domination? It started with Lina Wertmüller. It’s a very short history; more of a haiku.”

All in all, it was a night of very belated, well-deserved wins.

Laura Dern and Kyle MacLachlan first met David Lynch at a Bob’s Big Boy where Lynch was doodling on the tablecloth using ketchup and his finger. Yep, that checks out

“Most days you walk on to set, you will find David [Lynch] painting a wall, hand-making a prop, and seamlessly setting up a shot,” says Laura Dern.

God is happy! Here is David Lynch finally getting an Oscar! pic.twitter.com/8ccHerVw2p

Even in a 20-word acceptance speech, there is debate over what #DavidLynch is saying. pic.twitter.com/XNrmiBtzw0

So happy for our buddy, Dave! #OSCAR #bluevelvet #ampas pic.twitter.com/Cfds7pG8x2