Film Review: Parasite Is Another Brilliant Portrait of Class Warfare From Bong Joon-ho

It’s a film that demands greater reflection and repeat viewings 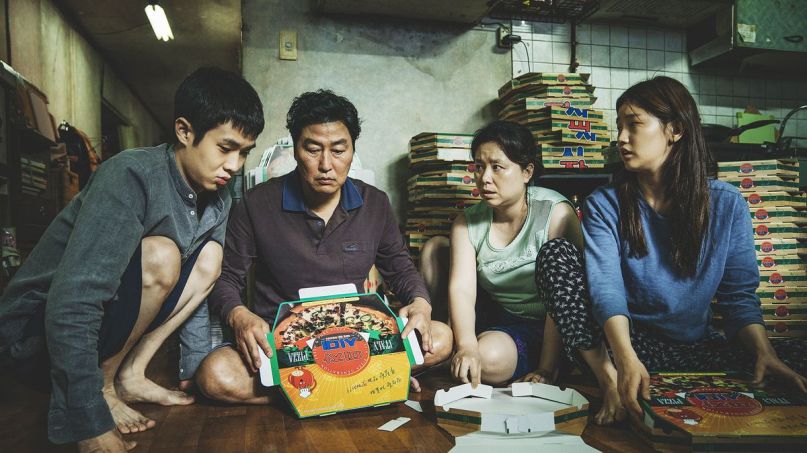 The Pitch: The Kim family — failing ne’er-do-well patriarch Ki-taek (Song Kang-ho), wife Chung-sook (Chang Hyae-jin), and their clever and resourceful but no more successful adult children Ki-jung (Park So-dam) and Ki-woo (Choi Woo-shik) — are struggling. They share an overcrowded, infested basement apartment and are forced to steal wifi and work as outsourced pizza box folders in an effort to pay down their debts.

The Parks — highly respected and monied patriarch Mr. Park (Lee Sun-kyun), gullible Mrs. Park (Jo Yeo-jeong), their teenage daughter Da-hye (Jung Ji-so), and unruly young son Da-Song (Jung Hyun-joon) — are not. They live in a beautiful home designed by a famous architect and appear to have everything going right for them, aside from some possible minor childhood trauma on the unruly Da-Song’s part.

The former family’s luck begins to change when a friend of Ki-woo’s lands him a position as Da-hye’s English tutor. Slowly and meticulously, the Kims begins to insinuate themselves into the Parks’ lives, but their plot eventually spirals far out of their control with unexpected and catastrophic consequences for everyone involved.

Do Believe the Hype: Bong Joon-ho’s (Snowpiercer, Okja) latest stunned audiences and earned the Palme d’Or when it premiered at Cannes. While film festival hyperbole doesn’t always translate into critical or commercial success in the real world, Parasite really does live up to its praise. It’s already a domestic box office hit in Korea and seems poised to find its American audience when it opens Stateside as well.

The critics who have been hailing Parasite as groundbreaking and indescribable aren’t particularly exaggerating, either. The plot points — and even the themes — of this class war thriller/satire/drama/horror hybrid isn’t exactly easy to distill and recount. It really is unlike anything we’ve seen before and, for most of us, will probably take more time to process and reflect and ruminate on than the review cycle permits.

For now, the various “holy shits!” and other barely articulated expressions of awe and appreciative confusion will have to suffice. Plus there’s only so much you can say about the film’s rapidly escalating rabbit holes and turns without giving away too much and robbing viewers of the semi-perverse pleasure of discovering them for themselves.

(Incidentally, it would be fascinating to compare and contrast how Parasite’s piercing but never heavy-handed reflections on class are being interpreted by the the upper crust who tend to populate the more luxurious aspects of film festivals vs how they’re being seen by the struggling freelancers who cling to its outskirts and live off its scraps.)

Upstairs, Downstairs: Perhaps the best description of Parasite came from Joon-ho himself when he called his latest feature “a comedy without clowns and a tragedy without villains.” There are no easy answers, no clear-cut moral lines, and no purely sympathetic characters in this film. The Kims are obviously shameless and conniving in their quest to to milk the Parks for all they’re worth — and their plot comes with some brutal collateral damage —but it’s hard not to empathize with the gut-wrenchingly rendered desperation that has led them to this point in their lives. The Parks, on the other hand, don’t deserve what the Kims are doing to them, but it does become challenging to side with them as their genteel facade begins to drop. They’re not evil rich people, but they’re clueless ones, and their casual obliviousness has ugly consequences of its own.

Which isn’t to say that Parasite descends into wishy-washy gotta-see-both-sides blandness. Joon-ho established himself as one of the most insightful filmmakers when it comes to class struggle with films like Snowpiercer and his continued success has done nothing to diminish his razor-sharp but humane takes on how inequality can ravage people on both a structural and personal level. Parasite is an ugly portrait of humanity as it spirals into its worst instincts, but it’s an incredibly thoughtful and careful one. Even as the plot and its characters descend into darker and more bizarre depths, that touch is never lost.

Juggling Act: The humanity on screen might be messy, but the skill with which it’s portrayed never is. There are at least three perfectly good films squeezed into Parasite’s 131 minutes. There’s a deft cat-and-mouse thriller between the Kims, Parks, and some unexpected combustible elements. There’s biting satire of the upper class occasionally peppered with moments of farce. And there’s an aching slice of life portrayal of people trapped on the outskirts of society. All of these aspects would have been impressive on their own, but the way Bong Joon-ho weaves them together, without ever slipping into self-indulgence or excess, is nothing short of masterful.

The Verdict: Far from fading when the initial festival excitement wears off, Parasite’s reputation has the potential to only grow with time. In addition to being a strong contender for Best Foreign Film come Oscar season, it’s a film that demands greater reflection and repeat viewings — and appears to promise greater rewards for this further investment. With more reflection and more time, perhaps we’ll all start to piece together just what makes it so intriguing and harrowing — and on how many different levels it impresses. In other words, well, holy shit.