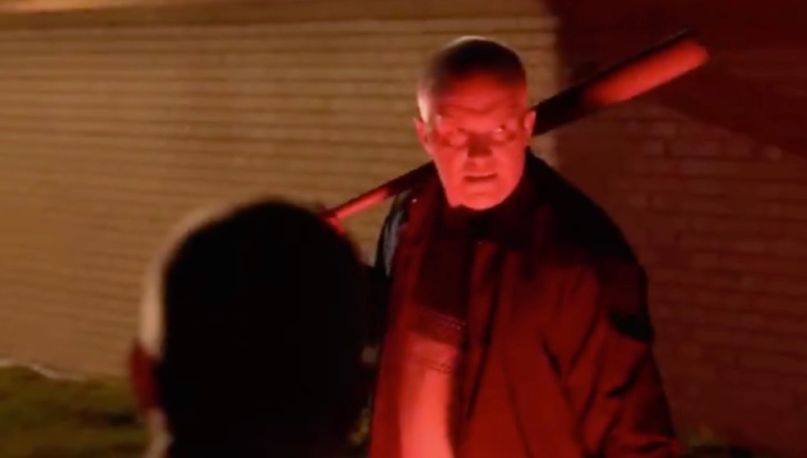 It’s Halloween, everyone’s entitled to one good sizzle reel. To celebrate the holiday, Laurie Strode herself Jamie Lee Curtis has shared some behind-the-scenes footage of next year’s Halloween Kills. The film is currently shooting down in North Carolina.

At roughly 21 seconds, the short clip offers all kinds of tricks and treats to diehard fans, namely our first look at Anthony Michael Hall as Tommy Doyle. You also get to see young Lonnie Elam in what must be a flashback, and Laurie dealing with wounds.

‘Tis the season….. to start screaming. First look at the mayhem David has created for all of you. @halloweenmovie #halloweenkills #strodesstrong @universalpictures @miramax @blumhouse @halloweenmovie pic.twitter.com/klrpzk1Ykg

In addition to Curtis and Hall, the forthcoming sequel stars returning Halloween veterans Kyle Andrews as Lindsay Wallace, Nancy Stephens as Marion Chambers, and Charles Cyphers as Sheriff Brackett. Robert Longstreet has also been cast as former rival bully Lonnie Elam with both Judy Greer and Andi Matichak rounding out the Strode fam.

(Ranking: Every Halloween Movie from Worst to Best)

As previously reported, Blumhouse has dated the final two Strode-Myers sequels for October 16th, 2020 and October 15th, 2021. Once again, the Master of Horror himself John Carpenter will executive produce alongside McBride, Curtis, Green, and everyone else at Blumhouse. Although not officially confirmed, Carpenter told Consequence of Sound last December that he’s ready to score again.

Stay tuned as this continues to unfold. In the meantime, you can revisit the first season of Halloweenies. Last year, the podcast series sliced through each and every Halloween movie, leading all the way up to the reboot.

Stream their review of the 2018 blockbuster below.