The Third Man rocker served up renditions of "Icky Thump" and "Seven Nation Army", as well as Dylan's "License to Kill" 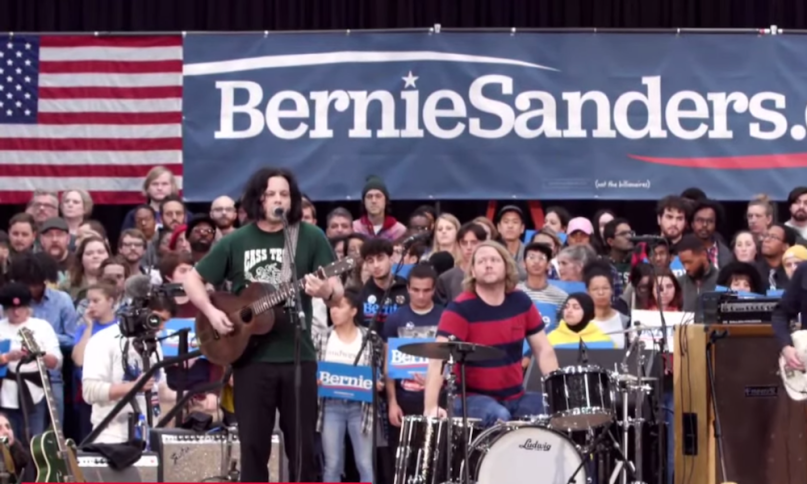 Democratic presidential candidates have proven they have good taste in walk-out songs, but nothing beats having the artists you love there in person. That happened Sunday night when Jack White performed at a Bernie Sanders rally in Detroit. Both White and U.S. Representative Rashida Tlaib were featured guests.

As previously reported, White was eager to pause The Raconteurs’ ongoing tour in order to perform at a presidential campaign rally for Bernie Sanders. Given the event was being held at Cass Technical High School in Detroit, where White went to school, it was as ideal of a time as ever to reveal he’s a Bernie Bro and try to promote his campaign. That, and he’s just a vocal critic of Trump eager to remind people how horrible our president is.

White performed a stacked live set before the rally officially began. He opened with Boarding House Reach cut “Corporation” followed by The White Stripes’ “Icky Thump” and “Connected by Love”. Then came more songs by The White Stripes, like “Black Math”, “We’re Going to Be Friends”, and eternal crowd favorite “Seven Nation Army”. He also snuck in a cover of “License to Kill” by Bob Dylan, saying it reminded him of President Trump, reports Stereogum. Watch fan footage from his set below.

After playing a few songs, White took a moment to address why he was playing a Sanders rally. “I don’t associate myself with any particular party,” he said. “I just listen to the issues, who is lying to me, and who I can trust. Bernie Sanders is telling the truth and is someone I can trust.”

The endorsement from White is the latest in a string of musical moments soundtracking Bernie Sanders’ new campaign. Sanders helped promote hardcore band Knocked Loose after a billboard advertising their new album could be seen behind his podium in Kentucky. Before that, he was interviewed by Cardi B, continuing his tradition of talking with smart, high-profile rappers instead of the ones spouting absurd slavery revisionism.

Jack White opens with “Icky Thump” at the @BernieSanders rally in Detroit:

“White Americans, what
Nothing better to do
Why don't you kick yourself out
You're an immigrant too” pic.twitter.com/hE5ZzVOjiK