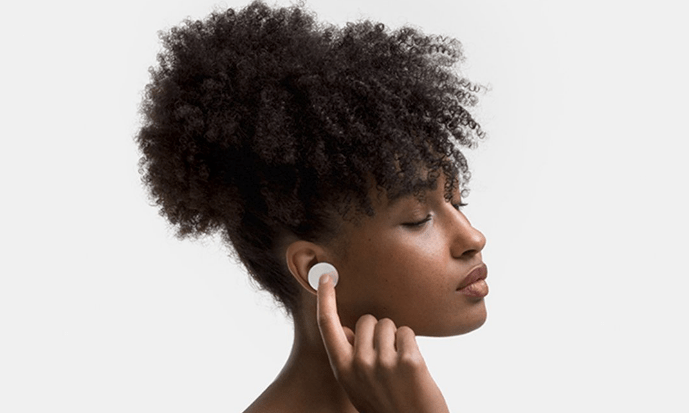 Microsoft has announced its first truly wireless earbuds, and if you haven’t seen them yet, you will. Unveiled at the company’s product event in New York City, Microsoft’s Surface Earbuds are their answer to Apple’s AirPods and other similar devices. According to The Verge, they’re expected to hit the market later this year — at which point their massive size will make them unmissable.

The basic features of the Surface Earbuds are pretty standard. They have a charge that will provide eight hours worth of continuous playback and come housed in a charging case that can hold 24 hours of battery life. Each individual earbud comes with two built-in microphones, which is said to aid with noise reduction while you’re speaking into them.

The key difference is the overtly noticeable size. These things are mini-saucers, and that’s because each one is actually a huge touchpad. A series of swipes or touches can open Spotify, skip songs, and accomplish other typical actions. But Microsoft is pushing the Surface Earbuds as the perfect compliment to its Office Suite, with features that allow you to scroll through Power Point slides and transcribe your speech directly onto presentation screens. People who were already doing these sorts of things with their phones can now use a totally different expensive piece of technology to accomplish the same thing — and isn’t variety the spice of life?

Besides the touchable aspects, the real selling point is supposed to be the comfort. “We looked at many options for ergonomics and weight,” said Microsoft’s Robin Seiler. “We created a simple design that balances against two points in your ear.” It’s good that she clarified where the two points are, because from the pictures it looks to touch everything between the hairline and the jawbone.

Microsoft seems to be touting the earbuds’ “all-day comfort”, perhaps because they don’t look terribly comfortable. The huge discs look more like your grandfather tried the old pull-a-silver-dollar-out-of-your-ear trick but had a horrible accident. The company would like to focus on the wonderful “in-ear stability,” because the first time you wear them to work, your coworkers will wonder if you tried to gauge the wrong part of your ear. You might wear them for Halloween if you were going as a mind control victim, and you wanted to leave the MAGA hat at home.

Microsoft’s Surface Earbuds will retail for $249, and will probably hit stores in time for holiday shopping. Whether they’re more comfortable or not — jokes aside, they probably are — you’ll certainly make a statement when you wear them.