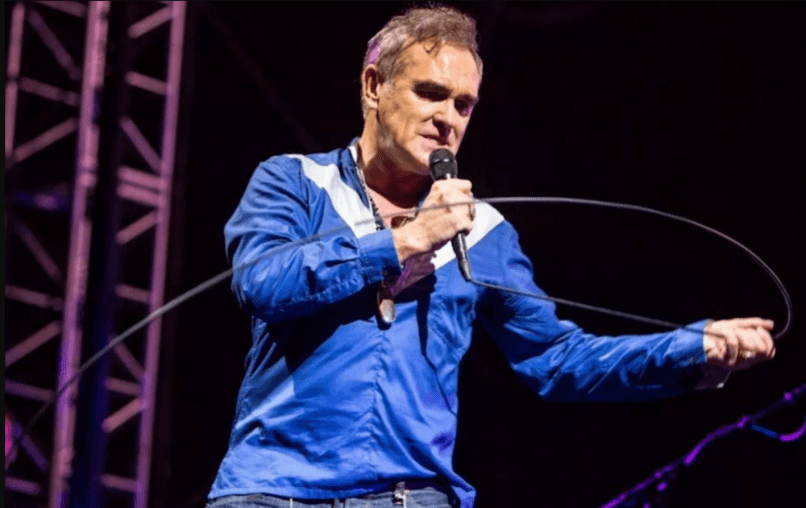 Last week, Morrissey refused to perform at his own concert in Portland until protestors holding signs were kicked out. Today, he’s taken to his website to claim that those protestors were “paid for and planted in the crowd by the British press.”

During the Portland show, Morrissey paused his set to address two audience members that were protesting his recent commentary on British politics. One carried a sign that read “BIG MOUTH INDEED,” while the other held one featuring a crossed-out logo of For Britain. Morrissey refused to continue the concert until both protestors were kicked out.

Today, Morrissey took to his website to comment on the whole thing. He posted a picture of the crowd at his most recent San Diego concert. The image’s caption reads, “…no ‘politically offended protestors’ (as paid for and planted in the crowd by the British press) in sight…” Of course, there is no evidence that the protestors at his Portland show were British, were paid to be there, or had any ties to the British press.

(Read: Ranking Every Song by The Smiths from Worst to Best)

Morrissey’s descent into far-right ideologies, racist statements, and general shittiness has been more pronounced as of late. Earlier this year, he claimed he can’t be racist because “everyone ultimately prefers their own race.” He also wrote a long-winded statement explaining his support of For Britain, a far-fight, anti-Muslim political party.

Beyond the concert protestors, Morrissey has been rebuked by many of his musical contemporaries. Billy Bragg slammed Morrissey for his “white supremacist” video post and for “betraying” fans by supporting For Britain. Damon Albarn said Morrissey has no business commenting on UK politics.

Others like Nick Cave, have said Morrissey’s political views are “irrelevant” to his musical legacy. Brandon Flowers, meanwhile, has insisted Morrissey is “still a king” despite his views.

Johnny Marr seems the least bothered by his former bandmate’s behavior or its affect on The Smiths’ legacy. “I’m not worried,” he said. “It’s got nothing to do with my world or my life.”