"LOOK AT THIS PHOTOGRAPH (OF A COPYRIGHT TAKEDOWN NOTICE)!" 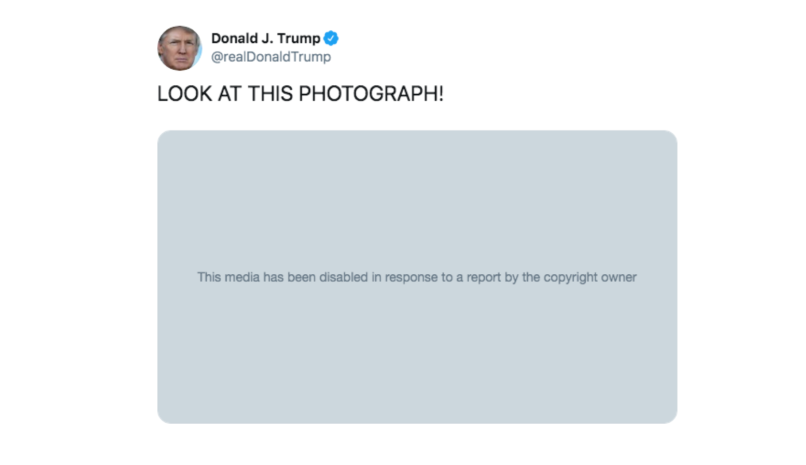 Yesterday, in an attempt to troll his chief political rival, Joe Biden, Trump tweeted a photograph of Biden and his son golfing with a Ukrainian gas executive, superimposed into Nickelback’s video for “Photograph”.

Update – October 14th: Queen has also gotten one of POTUS’s tweets pulled, this one featuring a campaign rally speech soundtracked by “We Will Rock You”.

As of this morning, however, the video has been taken offline “in response to a report from the copyright holder.”

LOOK AT THIS PHOTOGRAPH! pic.twitter.com/QQYTqG4KTt

This is not the first time Trump’s Twitter feed has been silenced at the hands of a musical act. R.E.M. previously filed a copyright infringement notice against the president after he soundtracked a video with their song “Everybody Hurts”.

But because it’s Nickelback, Twitter has jokes for days.

Nickelback had Trump's video taken down for copyright infringement.😂

Trump got owned by Nickelback as the entire world laughs.

If that's not worthy of impeachment, I don't know what is. pic.twitter.com/Xaa80pujTM

"Nickelback sent the President of the United States a takedown request" is truly one of the most epic sentences in the English language. https://t.co/YpQ2obDR7Q

As I predicted, @realDonaldTrump appears to be the first American President to be dissed by @Nickelback. pic.twitter.com/vuN1J3FJGq

Is there anything more pathetic than violating copyright law with a pinned Nickelback tweet pic.twitter.com/ip5jksa0aO

Well, if you had “Nickelback invokes trademark infringement to remove a parody video posted by the president to Twitter,” on your 2019 bingo card, today is your day. pic.twitter.com/gxZyvIsUQD

How to go from most mocked band ever to political rock hero status in one legal maneuver.
Well played, Nickelback. pic.twitter.com/Whw60L1Yjp

In related news, I hear Trump is declaring war on Canada tomorrow.

Previous Story
FOX News commentator who told Kacey Musgraves to shut up and “sing” is out of a job
Next Story
Richard Jewell, hero of the 1996 Olympics bombing, faces trial by media in trailer for Clint Eastwood-helmed biopic: Watch
Popular
More Stories
[fu-upload-form form_layout="media" title="Submit Your Photo"][input type="hidden" name="ugc" value="1"][/fu-upload-form]