The Purple One had a message for modern pop purveyors: "We don’t like it no matter how many times they play it" 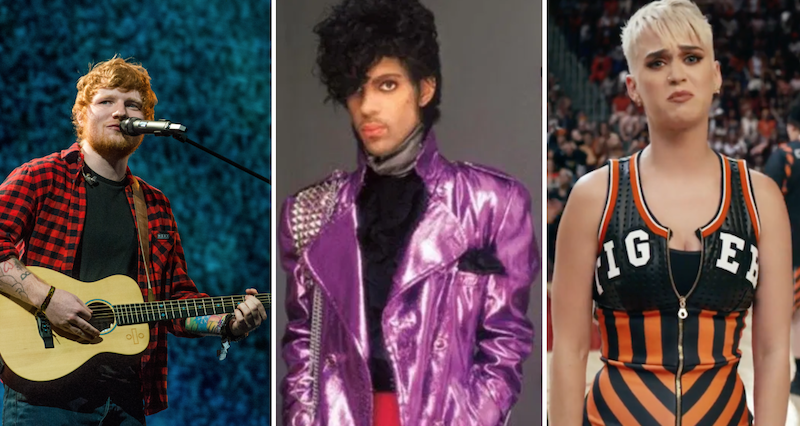 Prince had his pop culture affinities for things like Janelle Monáe and New Girl, but he wasn’t much a fan of modern pop music at large. He once said there wasn’t enough mainstream pop “that makes you feel scared, that makes you wonder what’s happening,” and now we know exactly about whom he was talking about. According to his recently released memoir, The Beautiful Ones, the musical icon had a particular distaste for Ed Sheeran and Katy Perry.

“We need to tell them that they keep trying to ram Katy Perry and Ed Sheeran down our throats and we don’t like it no matter how many times they play it,” Prince wrote.


The rallying cry was found amongst a trove of handwritten notes at Paisley Park after the singer’s fatal overdose. Dan Piepenbring, whom Prince had handpicked to co-author his autobiography, compiled the letters while working on the book. The writer also spent three on-and-off months with Prince in 2016 prior to his death, flying to concerts around the world and spending time at his Minnesota estate.

In a recent interview with The Guardian, Piepenbring discussed the seemingly endless material he had to bring the memoir to life:

“In one room you’d find something from 1979, and within arm’s reach, there’d be something from 2002. There’d be these moments of intense intentionality — he’d gathered up all his handwritten lyrics from across his career, clipped them together and kept them in one place. Or he’d gathered artifacts pertaining to his father’s jazz band. It seemed very ad hoc and very personal.”

Named after the Purple Rain track, The Beautiful Ones discusses a range of topics ranging from Prince’s childhood and his relationship with his mother to his wildly successful career. Pick up your copy here.