TV Review: Nickelodeon’s Are You Afraid of the Dark? Reboot Gains Approval of The Midnight Society 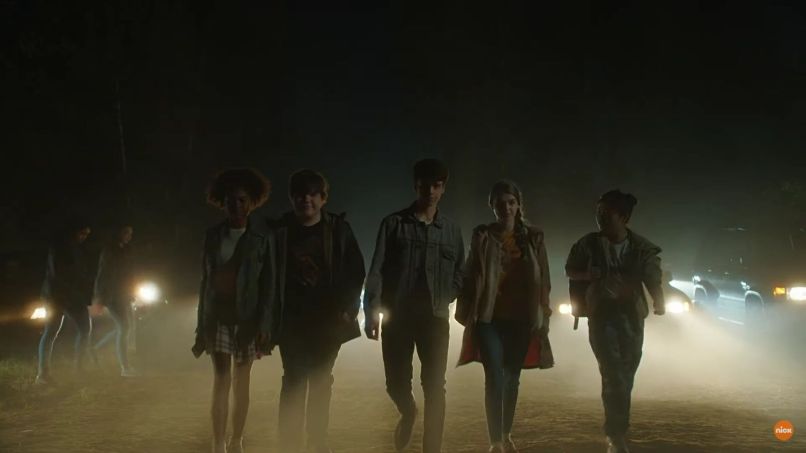 Are You Afraid of the Dark?, Photo by Nickelodeon

The Pitch: Any child of the ’90s with a curfew past nine, a cable connection, and even the slightest tolerance for terrifying tales once made a Saturday night ritual of watching Nickelodeon’s original scare show, Are You Afraid of the Dark?. The premise was simple enough, even if unlikely. An eclectic group of tweens and teens — supposedly from different schools and walks of life — meet in the forest around a campfire every week to share their love for frightening fictional fare. The show quickly became a smash hit for the network. For kids my age, AYAotD? was the ultimate water-cooler show, an introduction to anthology storytelling, and the reason so many of us went on to become horror buffs and Buffys.

(Read: Ranking Every Episode of Are You Afraid of the Dark? from Worst to Best)

Nearly 20 years since the last original episode premiered (well, if you count the truly disappointing 1999-2000 reboot seasons, anyway), the not-quite-ready-for-midnight players (the show always aired at 9:30) are back with more scary tales. Nickelodeon tapped filmmaker Dean Israelite (responsible for the recent Power Rangers reboot) and writer BenDavid Grabinski to give the Midnight Society a modern makeover via a three-part mini-series. Call it yet another nostalgia-grab. Call the reboot a no-brainer given the way horror sells on screens and streaming services of all sizes and types these days. But just remember one thing: when the magic sand flies, the fire belches, and those classic words are spoken (“Submitted for the approval of the Midnight Society…”), the tale — and the reboot — better make our goosebumps bump.

Are You Afraid of the Dark?, photo by Nickelodeon

Submitted for Your Approval: Shy and awkward Rachel Carpenter (Lyliana Wray) moves to Argento, Oregon (Argento, get it? Get it?), where she suffers the slings and arrows of being a new kid. That is until her spooky sketching and taste in horror movies attract the attention of a secret group of storytellers. However, after acing her initiation story and becoming a Midnight Society member, a classmate goes missing, and Rachel and friends soon realize that her story’s villain, Mr. Tophat (played by Rafael Casal and sartorially a combination of Zero-era Billy Corgan, Depp-era Willy Wonka, and Mr. Peanut), and his kid-vanishing Carnival of Doom aren’t just a story. In fact, the carnival has come to their town.

The Tale Is the Show Is the Tale: A lot of this miniseries should feel familiar story-wise. Mr. Tophat’s Carnival of Doom takes liberal license with the premise of Mr. Dark’s Pandemonium Carnival from Ray Bradbury’s Something Wicked This Way Comes. And the concept of the Midnight Society stepping away from the campfire to find themselves actually battling evil and the supernatural was done as a three-episode narrative in Season Seven called “The Tale of the Silver Sight”. That said, to have Rachel’s initiation story come true is a bold and brave move. As neighbor, crush, and fellow society member Gavin explains, the fun of telling scary stories is letting your imagination run wild but then being able to return home and know that you’re safe. To toy with the line between tales and reality tugs away at that inner sense of security — the voice that reminds us that “it’s only a scary story.” Not an original move, but a smart one.

The Midnight Society, photo by Nickelodeon

Not Your Parents’ Midnight Society: From the opening moments, the miniseries sets itself apart from its predecessor. Gone is the warmth, ’90s cheese, and, um, Canadian-ness of the original run. And that might be for the best. As fun as the original series was and as creepy and even poignant as some of its better tales were, it’s hard to imagine a modern audience of children getting too enthralled by such dated production or the original society’s punny antics and teenage problems. In some ways, it’s similar to looking back at family photo albums and seeing how your parents dressed in the ’80s or ’90s. Some things should stay in the past where they belong.

The reboot has replaced all that ’90s television warmth with paler shades and darker corners and grittier detail, film-like production quality, and far better child actors. Clearly, producers are fashioning the new Midnight Society less on the old one and more on, say, the Losers’ Club or the Stranger Things party — not a bad strategy, really. While the original series often scared us because its creepy tales invaded the supposedly safe spaces of our suburban lives, this miniseries banks on scaring us by showing us those places were never safe to begin with. It’s a much darker look at the world.

More Tales to Tell?: Since Paramount delayed (pulled the plug?) on a planned AYAotD? full-length feature, it’s hard to know just how excited the “players” out there still are about this property. Could this miniseries be the toe-dip to see if there’s enough public interest for a movie or more episodes? The miniseries’ modern lean and focus on the Midnight Society itself offer an aesthetic and cast that could move into production right away (that is if rising names like Jeremy Ray Taylor want to be bound to a scary kids show). Still, I wonder if a modern audience of children need the same training wheels we did on our way to becoming horror fans. I also wonder if a generation raised chatting alone on phones can identify with the idea of campfire stories anymore. It’s a shame if those charms have been lost.

Are You Afraid of the Dark?, photo by Nickelodeon

Welcome to the Midnight Society: Nostalgia hounds might be disappointed that the new Are You Afraid of the Dark? looks and feels nothing like the original series. In reality, though, the brains behind the miniseries did a commendable job of rebooting a beloved property in a way that it can be taken seriously (or as seriously as starter-horror should be) by a new generation of children. With only three episodes to work with, it made sense to turn the Midnight Society on its head rather than just tell three tales and hope that, as anthology television (and Meatloaf) have taught us, two out of three ain’t bad. It’s also so much better that the miniseries doesn’t spare a single second trying to tie back into the show of our youth with cheap callbacks but rather focuses on the Midnight Society here and now. (Hell, we might not even know if it’s intended to be the same society and campfire as in the original.)

Most of all, oldies like me and children alike should be thankful that the current cheeses understand the basic formula that show co-creators D.J. MacHale and Ned Kandel spun into chills in the original: kids with real problems pooling their strengths against a force and coming out the other side a little stronger and wiser for the battle and screams. It’s an old tale, but one that usually wins approval.