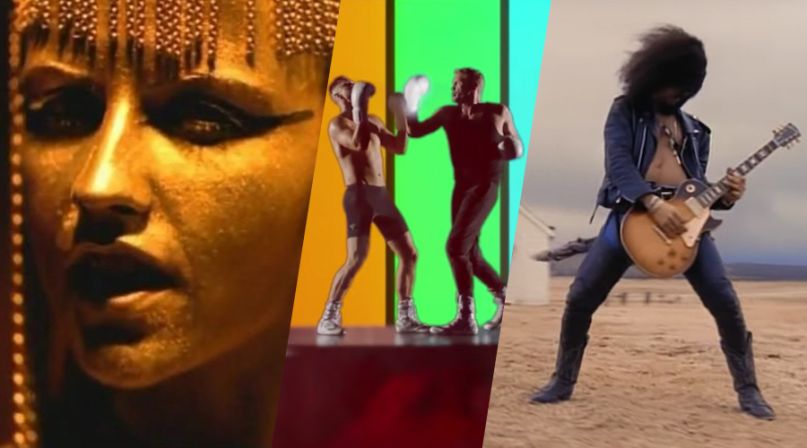 While we’re all out here formulating our best of the decade lists, Vevo has hit a landmark all its own. Launched in 2009, the music video platform is celebrating its 10th year of existence. To commemorate the tin anniversary, Vevo is rolling out its own best-of lists, and today they’ve revealed the top 10 most-watched rock music videos in the US.

Of course, Vevo has every right to be proud of its original content like LIFT and DSCVR, which have highlighted artists like Billie Eilish, Halsey, Lewis Capaldi, Khalid, and Alessia Cara early in their careers. But the video hosting service also plays home to over 400,000 music video, a massive catalog that’s been steadily building ever since its inception. Lovers of rock music have naturally been drawn to some of these clips, and the 10 most popular are listed out below.

The list includes classics and modern hits alike, a few of which will surely come as a shock to some. So scroll on to see what made the cut from No. 10 to No. 1.

Date Uploaded: June 16th, 2009
US Views: 113 million
In Your Head: Undoubtedly one of the most enduring alternative rock songs of the ’90s, the “Zombie” visual is full of powerful imagery from The Troubles. In fact, the BBC banned The Cranberries’ original version at the time of its release.

Date Uploaded: December 2nd, 2009
US Views: 115 million
Wake Me Up: Still a great karaoke jam, even if the clip is a prime example of crummy early-aughts “gritty” special effects. And not a hint that the song is from Ben Affleck’s oft-maligned (but arguably not terrible!) Daredevil movie; it may not have made a franchise, but it definitely helped make Evanescence’s career.

Date Uploaded: August 11th, 2014
US Views: 119 million
Arms Wide Open: It almost doesn’t matter what you think of Five Finger Death Punch, because the “Wrong Side of Heaven” video is essentially a valuable PSA. Highlighting PTSD and the plight of homeless veterans, it’s hard not to be moved by the clip.

Date Uploaded: November 7th, 2012
US Views: 124 million
We Had Some Fun: AC/DC basically turned London’s landmark Brixton Academy venue into a real-life Thunderdome so that guitarist Angus Young could strut in front of a bunch of fans wearing “AC/DC – I was Thunderstruck” T-shirts. Man, rock in the early ’90s was fun.

Date Uploaded: June 16th, 2009
US Views: 131 million
Entertain Us: Arguably the most iconic clip on this list, it was reportedly a complete mess to shoot. Still, it led to Nirvana taking home Best New Artist and Best Alternative Group at the 1992 MTV VMAs, and first-time director Samuel Bayer went on to helm the A Nightmare on Elm Street reboot… so there’s that.

Date Uploaded: December 24th, 2009
Views: 137 million
Where Do We Go?: Even though Guns N’ Roses kinda hate the edit of the song, you don’t get much more classic ’80s music video than a band rehearsing in grainy black-and-white. You can practically hear the swooning as the color fades in on Axl Rose’s smoldering face at the end. The clip recently became the first pre-YouTube-era music video to hit 1 billion views.

Date Uploaded: October 5th, 2009
Views: 141 million
The Miles Just Keep Rollin’: Frankly, we’re surprised this one has been as perennial as it has, too — it’s not even 3 Doors Down’s biggest hit. Don’t act like you don’t bob your head to that chorus when it drops, though.

Date Uploaded: December 25th, 2009
US Views: 144 million
It’s Hard to Hold a Candle: That’s one hell of a Christmas present, Vevo. The live shots, the wedding, Slash soloing in front of the Silverado church — this video is purely iconic. One of the most expensive videos of all time, it cost a whopping $2,678,089 (adjusted for inflation, of course).

Date Uploaded: October 2nd, 2009
US Views: 145 million
You Wanted To: A signature song not just for System of a Down, but alternative metal as a whole, the “Chop Suey!” video is prime early-aughts rock glory. Retrospectively corny special effects, uncomfortable close-ups, and a sea of heads screaming along to the lyrics — the good ol’ days.

Date Uploaded: March 7th, 2017
US Views: 158 million
Third Thing’s Third: The fact that this is the most recently uploaded video yet tops the list is evidence of Imagine Dragon’s immense popularity. Reflecting the song’s lyrics, there’s a decent (if slightly on-the-nose) metaphor running throughout the visual, as singer Dan Reynolds’ internal struggles play out as a boxing match with the one and only Dolph Lundgren. Any Ivan Drago cameo instantly awards you major points, so kudos.