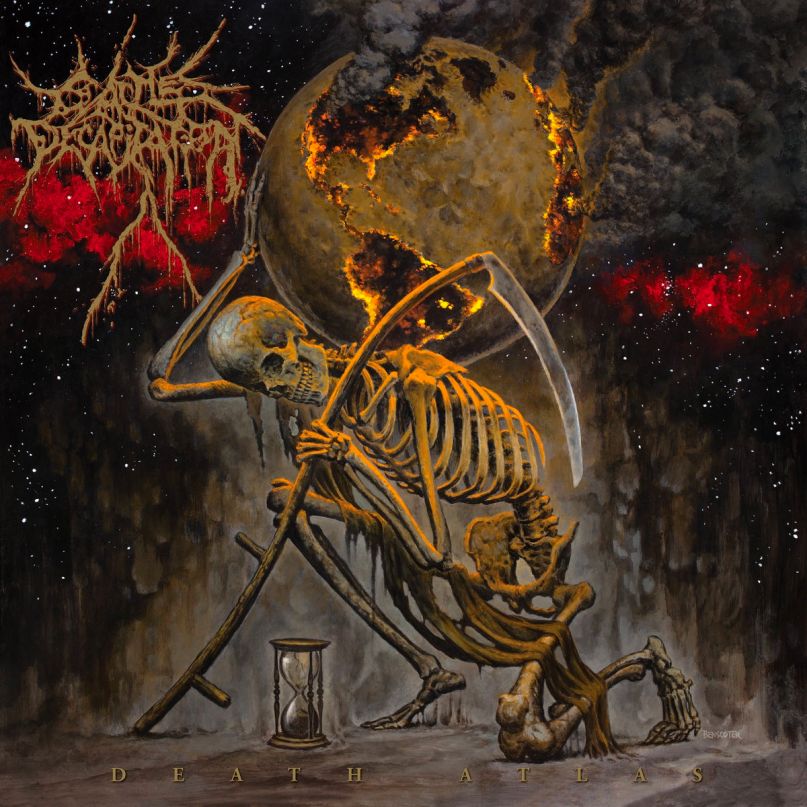 The Lowdown: Over the past two decades, Cattle Decapitation have continuously built upon their craft; from their brutal technicality to the theatrical elements of their work, the band has been nothing short of thrilling. Now, the death-grind outfit is back with its new studio LP, Death Atlas. Longtime frontman Travis Ryan leads a revamped lineup that features new members Olivier Pinard (bass) and Belisario Dimuzio (guitar), as Cattle Decapitation present a brilliant thematic record with exhilarating compositions.

The Good: In “The Geocide”, blast beats flood the song’s introduction, the guitars and bass driving the ominous rhythm. The track lets loose into a riveting flow, exploring various tempo and tonal shifts; from the chilling guitar notes, steady beat down of drums, and vocal screams of “F**k the future!”, this song pulls no punches. With the grinding drums and shifting rhythms and pitches of the guitar, the instrumentals throughout “One Day Closer to the End of the World” go in all kinds of directions. Towards the end, the track opens into this melancholy air; even while the drum work comes pummeling down, there’s this grim brightness exuding out from underneath, casting a haunting tone over the track.

Death Atlas feels like Cattle Decapitation’s most fully realized thematic record. Utilizing the interlude cuts, the lyrics, and instrumental atmosphere, the band explore the horrors of climate change and the cruelty of humanity. “Bring Back the Plague” involves different guitar pitches, going from bright to down-right guttural. The song will drop into these heavy, catchy rhythms that will more than likely get listeners head banging. Later on, the song enters a slower progression, the instrumentation casting a somber atmosphere. The singing adds an ominous heft to such lines as, “Bring back the plague/ Delete those that threaten a new world/ Start today/ Dig their graves.”

“Time’s Cruel Curtain” is one of the record’s more unique cuts. In the beginning, the guitars exude a haunting essence, casting a gloom that simmers above the slow pounce of drums and bass. At its halfway point, the track further expands upon this vibe; the singing and melancholic guitar tone, breathe despair and heartache.

The Bad: There is but the slightest element of repetitiveness found in the drumming; but to be clear, this is only because of the drumming’s chaotic nature, not because of any quality. Overall, Death Atlas provides a consistent flow of creative prowess from beginning to end.

The Verdict: Cattle Decapitation have released one of the most thrilling and heaviest records of 2019. The level of technicality displayed throughout Death Atlas is incredible; with plenty of balance between annihilating beat downs and atmospheric sequences, the record is an excellent representation of the band’s artistry. Along with the overall thematic presentation, Death Atlas is a remarkable work of death metal devastation and emotion.

Essential Tracks: “The Geocide”, “One Day Closer to the End of the World”, “Time’s Cruel Curtain”