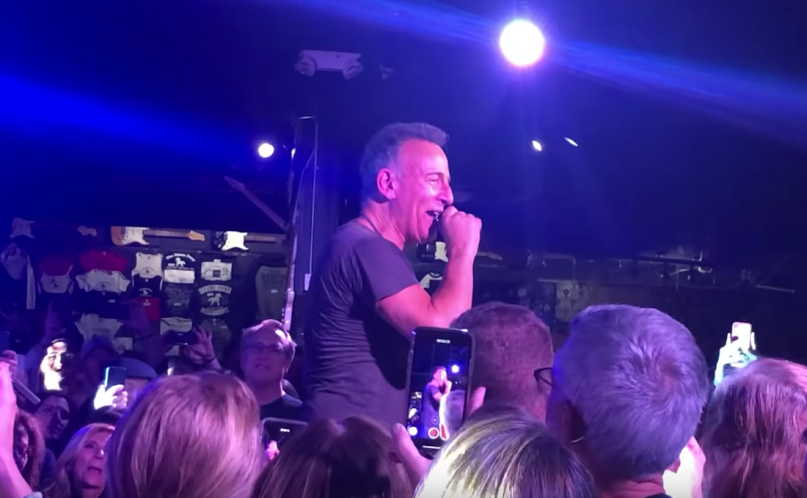 Bruce Springsteen played a surprise two-hour concert at The Stone Pony in Asbury Park, New Jersey this past Saturday to raise funds for Boston College.

For those unfamiliar, Springsteen and The Stone Pony go back decades, as The Boss regularly played the venue during his formative years. In the 2000’s, he returned to The Stone Pony as a way to raise money for his children’s high school and their respective colleges. His kids have been out of school for a while now, and so Springsteen hasn’t done one of those benefits in quite a bit — since 2011, to be exact. But Saturday night saw the legend take the tiny stage once more, this time to raise funds for his son Evan’s alma mater.

Springsteen was joined onstage by former Bon Jovi and Asbury Jukes guitarist Bobby Bandiera and his band, along with Max Weinberg of the E Street Band on drums. He played classics like “Dancing in the Dark”, “Born to Run”, and “Sprit in the Night” as well as covers of “634-5789” and “Twist and Shout”.

The show marked his longest performance since his Tony Award-winning Broadway show — which you can listen to as a live album — wrapped up nearly a year ago. Of course, The Boss has been churning through multiple-hour-long performances for years now. Perhaps his secret is that he works out at a $9.99-a-month New Jersey gym.

Footage from The Stone Pony show has been uploaded online, and you can watch a few highlights below. The complete setlist follows.