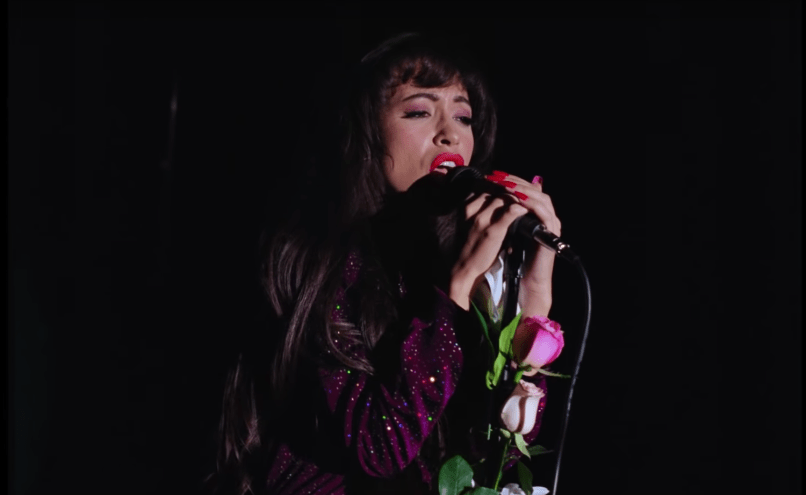 Christian Serratos in Selena: The Series

Christian Serratos has the big task of portraying Selena, one of the most influential Latin artists of all time, in the new Netflix original Selena: The Series. Today, Netflix unveiled a teaser for the show that gives fans their first look at Serratos as Selena, poofy bangs and all.

Selena: The Series is a coming-of-age story chronicling the singer’s rise to fame from a young age. It stars the aforementioned Serratos (The Walking Dead, The Twilight Saga) as Selena Quintanilla as well as Ricardo Chavira as her father Abraham, Gabriel Chavarria as her brother A.B., Noemi Gonzalez as her sister Suzette, Seidy Lopez as her mother Marcella, and Madison Taylor Baez as a young Selena.

Those worried about an overly dramatic or ignorant remake of Selena’s life shouldn’t worry. The scripted series was developed alongside the Quintanilla family and will also see them serving as executive producers. Having the family give their blessings is one thing, but it’s another thing entirely to get them to weigh in on the script directly, which should do wonders for the show’s authenticity.

(Read: The 10 Most Essential Posthumous Albums)

Netflix’s first look at Selena: The Series begins with a shot of Serratos laying on the floor at home as she flips through a script of the show. She puts on a record, begins practicing dance moves, and eventually leaves the house to perform onstage while her cast members look on. It’s a short clip — barely a minute in runtime — but one that gives a good visual of the aesthetics, art direction, and casting.

Selena: The Series — Part 1 will premiere in 2020. Watch the first look teaser for the series below.

Get your first look at Christian Serratos, who will play Selena Quintanilla in a coming of age story chronicling the iconic singer's rise.