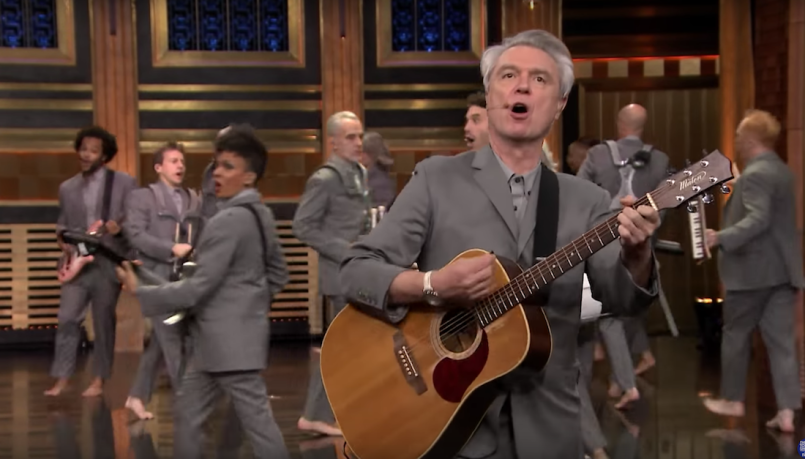 Supporting his acclaimed Broadway production American Utopia, David Byrne appeared as a guest on The Tonight Show on Tuesday night. In addition to talking with Jimmy Fallon about the show, he and his Broadway cast performed “Road to Nowhere” off 1985’s Little Creatures.

Having previously delivered a show-stopping performance of “One Fine Day” on Kimmel last month, Byrne continued to showcase the overall America Utopia experience on Fallon. This reworked rendition of “Road to Nowhere” began with Byrne and a few other musicians singing in the dark. As the lights went up, out marched a much bigger group of performers, tramping right over to Fallon’s desk. Eventually, The Roots joined in, building to a big chain of happiness dancing around the studio.


For the interview segment, Byrne actually biked onstage to greet Fallon. He then sat down to discuss adapting his touring show for Broadway and how the audiences have reacted to it. He even taught the host how to do a dance from the musical. Watch a replay of the chat and performance below.

David Byrne’s American Utopia on Broadway was recently extended through February 16th at the Hudson Theater in New York City. After watching his Fallon performance below, don’t be surprised if you find yourself dying to see him do it all again live. Get tickets to the production here.

Byrne previously appeared on This Must Be the Gig, where he talked with our own Lior Philips about his production on the American Utopia tour. Revisit the episode below: