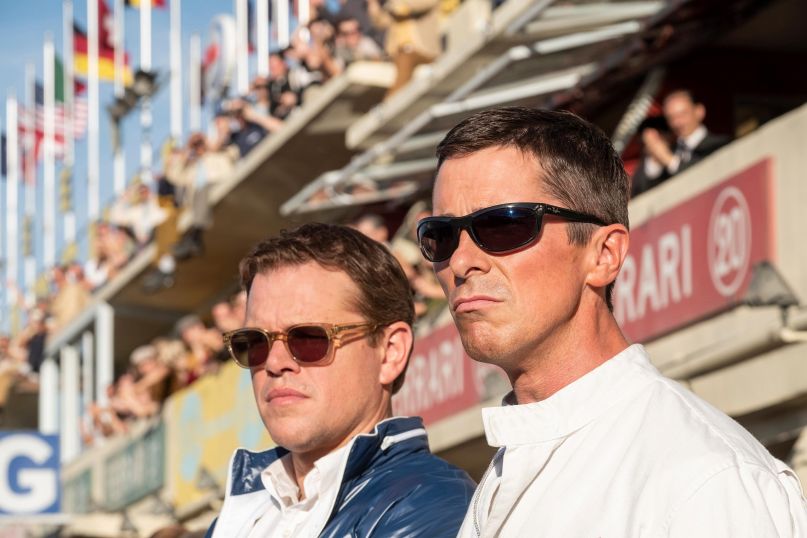 The Pitch: After becoming the sole American to win the “24 Hours of Le Mans” race in 1959, Carroll Shelby (Matt Damon) retires from racing to open a car shop. Eventually, he’s approached by enterprising Ford marketer Lee Iacocca (Jon Bernthal) to assemble an American team to take on Ferrari, the perennial winner. Shelby butts heads with 2nd in command Leo Beebe (Josh Lucas) over the suitability of difficult, but gifted driver Ken Miles (Christian Bale) as they work to bring fame and glory to the Ford company with a win at Le Mans.

Real Life Racing: Ford v Ferrari is based on real events, but like most Hollywood films of its ilk, there are quite a few liberties taken. The most egregious is the distillation of the team approach to racing at Le Mans, which requires drivers to work collaboratively by driving in four hour shifts over the 24 hours. In the film, however, the race is presented as a Herculean one-man effort, with a background extra swapping Miles out whenever he is required for a dramatic conversation with Shelby over Beebe’s latest mustache twirling antic.

Stock (Car) Characters: The screenplay, by Jez Butterworth, John-Henry Butterworth, and Jason Keller, follows in the footsteps of last year’s Neil Armstrong biopic First Man by narrowing its focus to the most conventional Hollywood elements – in this case the friendship between Shelby and Miles – at the expense of supporting characters. Miles’ wife, Mollie (Caitriona Balfe), and son, Peter (Noah Jupe), exist solely to occasionally act concerned about Miles’ health or wring their hands about money. Bernthal, meanwhile, nearly disappears from the film after the first act, despite being top billed after Bale and Damon. And then there’s Beebe. The man has no nuance or motivation, turning up exclusively to throw up obstacles in Miles and Shelby’s way. He is such a stock nefarious villain that he might as well be a Disney villain.

Go America! “The Italians” – as they are frequently referred to – come off as sniveling, deceptive rats who hate America(ns). Yes, the film is set in the early ’60s when the political climate was different, but the level of vehemence between the two groups of racers – and by proxy, the two countries – caters to a very specific kind of “rah rah” Americana. The whole narrative is a patriotic campaign that arises only after the Italians insult the manhood of Henry Ford II (Tracy Letts), who responds to the personal slight by sinking millions of dollars into the feud.

Initially the film argues that Ford is persuaded to enter the world of racing in order to lend the ailing family-oriented company some sex appeal for young car buyers. That angle is almost immediately dropped once Ferrari uses the Americans to inflate the sale of their company to Fiat. From this point on, Ford v Ferrari exclusively becomes a pissing match between men with (too much) power and privilege. This narrative conflict is also emblematic of the petty rivalry between Beebe and Miles; the screenplay makes it seem as though all of the drama is due to the former man feeling insulted by the latter (with Shelby caught in the middle).

It’s all very tiring, and often plays like a cheap attempt to boost the conflict and keep the film interesting in between its sporadic racing segments.

Bale v Damon: Like any prestige drama starring A-list talent, there have been murmurs about the awards potential of Ford v Ferrari. Considering the film’s fairly traditional approach to storytelling and direction, that may be a long shot unless the Academy is looking for a classical yarn to celebrate.

In the battle of the co-leads, Bale is undoubtedly the film’s larger presence (Damon is truly a supporting actor, despite being top billed). Not only does Miles get the family drama, but he has the showier role as a hot-headed, temperamental genius.

Damon is perfectly fine, but he hardly leaps off the screen. Shelby is a genuinely good man and while the man’s attempts to mediate between Miles and Beebe compromise the majority of the film’s drama, the character is a bit flat and unremarkable. This is a role that Damon can perform in his sleep and he plays it convincingly, though not exceptionally.

Let’s Race: The single best element of Ford v Ferrari is undoubtedly the action sequences. Half of the film’s joy is ogling the gorgeous period cars and the way that Mangold films the experience of driving at ridiculously high speeds. Anyone who’s ever confused racing with simply driving very fast will rethink their opinion after Mangold literally puts the audience in the driver’s seat as the cars top out around 200 k/h. In the film’s best sequence, Shelby takes the Ford president for a ride in order to sway him that not just any driver can win and the result is laugh out loud hilarious. Overall these driving sequences do lend Ford v Ferrari their share of thrills, albeit far fewer than car buffs may have hoped for. Thankfully the film ends at Le Mans, so if the early parts of the film don’t impress, audiences need only hold out for the finale.

The Verdict: Ford v Ferrari is a classic Hollywood underdog film about friendship and overcoming obstacles. Mangold’s direction is serviceable, but unspectacular, while Bale is a dynamic presence. The film could have done with a less familiar narrative approach, but for men of a certain age, Ford v Ferrari will certainly do the trick.