Film Review: The Report Lacks the Weight of Its 525-Page Executive Summary 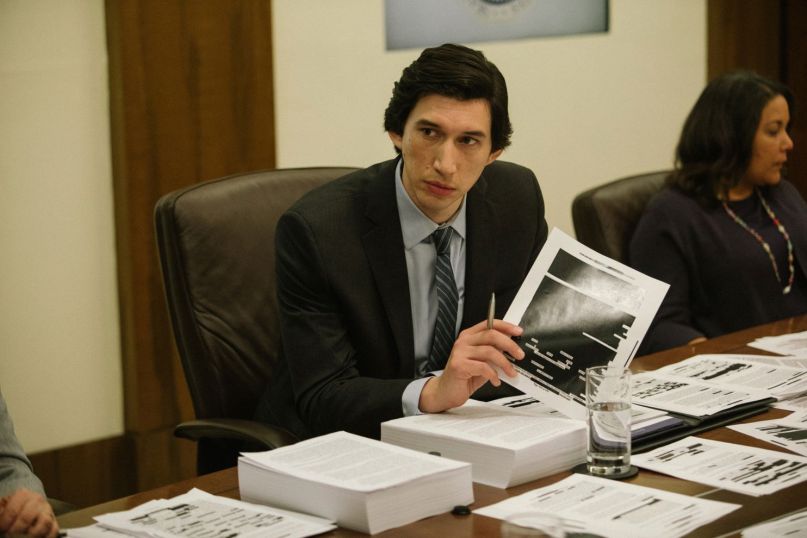 The Pitch: After the coordinated terrorist attacks of September 11, 2001, the United States’ newfound War on Terror included the implementation of “enhanced interrogation techniques,” or EITs, in order to gather information about those allegedly involved in and/or supportive of the attacks. EITs were primarily conducted on black sites, where CIA agents and outside contractors were granted virtually unlimited power to coerce, interrogate, and even torture detainees in service of that goal.

The CIA’s methods, which ranged from sleep deprivation to the forcible inducing of “learned helplessness” to the now-infamous use of waterboarding, were justified at the time as a necessary cost of war. To some, beyond that, they were an apt and justifiable punishment for 9/11. To those repulsed, revelations about the CIA’s approach served as a reminder of America’s willingness to bend and even break the law as long as the ends eventually justify the means.

An investigation into the CIA’s practices during that time (and in particular, their overall efficacy) was launched under Senator Dianne Feinstein (Annette Bening), the acting chair of the Senate Select Committee on Intelligence at the time. Led by staffer Daniel Jones (Adam Driver), the investigation lasted five years and was met with resistance at every step of the process, from CIA interference to the Republican Party’s repeated attempts to get ahead of the damning narrative it would put forth. The Report focuses on the efforts of Jones and his team over those five years, and on the personal and professional sacrifices required to finish the 6,700-page account.

Hard-Nosed Reportage: The Report is the latest in a long line of star-studded prestige dramas about the noble pursuits of truth and accountability. Writer/director Scott Z. Burns keeps the film’s perspective tight, following Jones as he’s corralled into a windowless basement office and left to sift through endless accounts of the unspeakable. It’s a through-and-through celebration of hard work and diligence, and if that sounds like a euphemism for “bone-dry storytelling,” its lack of flash seems wholly appropriate for its subject matter.

The Report is almost entirely built from furtive conversations in meeting rooms around Washington D.C., punctuated from time to time by Driver’s outraged deliveries of ongoing progress reports. For audiences open to this type of meat-and-potatoes procedural storytelling, The Report does occasionally come alive in its purpose-driven way, even if it’s heavily immersed in the clichés of its subgenre. From the moment Driver enters his empty office for the first time, it’s inevitable that a screen-friendly wall of connected evidence in the Pepe Silvia mode will eventually take over the setting. There’s also a shadowy informant in a parking garage, brusque dismissals of The Facts by parties with dubious motives, and a meager handful of suggestions that maybe it’s not healthy for Jones to be so deeply immersed in such horrors.

That last point speaks to the chief deficiency of The Report: it’s far more invested in recanting the facts, blow-for-blow along a timeline, than it is in exploring the players involved at any great length. While Jones’ stability is occasionally raised as a point of caution, and Driver does well in teasing out his growing exhaustion as the film hops along its timeline, the flat screenplay never situates him as anything less than an everyday superhero willing to sacrifice every aspect of his life in service of a nobler cause. This one-note approach extends to nearly every other character, whether it’s the CIA handlers looking to squash the report or Jones’ increasingly harried collaborators. Getting down to brass tacks can still be cinematically and dramatically effective (see: Spotlight), but when a two-hour feature is built solely from thin characters debating the film’s themes aloud at length, its chance at leaving a lasting impression is the earliest casualty.

Shock and Assault: The portion of the film that attempts to engage the viewer more directly, however, is also its most disquieting. For a film that takes a potshot at Zero Dark Thirty at one point over its supposed glorification of CIA torture, The Report lingers over its own grisly re-enactments of waterboarding and other abuses in even more visceral detail. There’s certainly an argument to be made for asking audiences, particularly those too young or unaware at the time, to remember exactly what the U.S. is capable of at its most desperate and vicious. But there’s another to be made that The Report’s dramatizations add too little to the film (especially when they disappear through its second hour) to justify their inclusion, particularly given the graphic close-up nature of Burns’ approach to them.

Curiously, the film’s most trenchant commentary comes from the finer moments built around its instances of torture. The other agents’ blasé day-at-the-office monitoring of it all puts a finer point on its amorality than most of the actual depictions do, and some of the film’s best material emerges from Burns’ scathing framing of a pair of government contractors who instituted the abuse-based EITs. The Report comes closest to finding its own voice when they stand before CIA directors with a grotesque PowerPoint presentation, discussing their proposals for sadistic torture methods with the bored affect of an internal corporate meeting. The film seethes with righteous outrage throughout, but too infrequently uses that in its filmmaking.

The Verdict: The Report exists to galvanize, and there’s a great deal of value inherent in offering yet another reminder that just 15 years ago, U.S. and foreign citizens were tortured and even killed by the CIA using illegal (or, in federal parlance, extra-legal) methods. But while the film’s intentions are noble, and its story worth retelling, it struggles throughout to lend a lasting weight to its straightforward plotting. If you truly wish to know what took place in those sordid locations, there’s a 525-page executive summary out there capable of painting a far more detailed picture.

Where’s It Playing? Select cities, ahead of its Prime Video release on November 29th.