"When our current president announced that he was running, a lot of people laughed too" 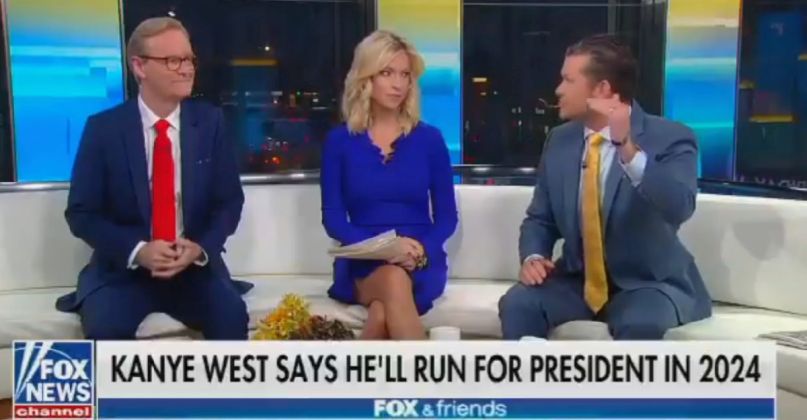 You gotta feel for Mike Pence — the dude has brazenly stood by Donald Trump despite the racism, alleged sexual assault, and locking up kids in cages, only to see the coveted Fox & Friends 2024 presidential endorsement go to… Kanye West.

Donald Trump’s favorite morning show dedicated a good portion of Friday’s program to covering Kanye’s post-Trump candidacy. The Chicago rapper and entrepreneur has repeatedly expressed his intention to seek the office in 2024, and recent actions have seemingly solidified his standing amongst the MAGA base. He donned a red hat in the Oval Office, became a born-again Christian grifter, and released an album full of Jesus praise. He’s also begun to embrace conservative talking points related to Democrats’ “brainwashing” of African Americans, and announced his intention to produce his Yeezy apparell line in American factories. “When I run for president in 2024, we would’ve created so many jobs that I’m not going to run, I’m going to walk,” Kanye declared during an appearance at  Fast Company’s Innovation Festival on Thursday.

Needless to say, Fox & Friends is loving it. “His new record, it is unbelievable. It’s great. The messages are beautiful. He’s a strong Christian. … He’d get the support of the black community. When our current president announced that he was running, a lot of people laughed too,” remarked Ainsley Earhardt.

“He’s a free thinker,” added Pete Hegseth. “People like him who have been liberated by the president, to think more freely, ask the big questions that aren’t being asked, and be aggressive about it.”

“You can see the depth of authenticity, of who he is and what he believes,” Hegseth continued. “It’s not a stunt, you can tell. If he continues to do that, and is thoughtful and intentional about what to do, he’s going to be the kind of person who the media laughs at, who the elites laugh at, but who gets the last laugh when Americans resonate with what he believes in.”

Ainsley Earhardt fawns over Kanye 2024: "His new record, it is unbelievable. It's great. The messages are beautiful. He's a strong Christian. … He'd get the support of the black community. When our current president announced that he was running, a lot of people laughed too." pic.twitter.com/ex7HJ6PLIt

Fox & Friends hails Kanye West for promising to bring jobs back to America as president. I hate this timeline so much pic.twitter.com/4Ks2cvv2ip

Pete Hegseth literally says that Donald Trump has "liberated" Kanye West "to think more freely, ask the big questions that aren't being asked, and be aggressive about it." pic.twitter.com/owpfw8YIm0