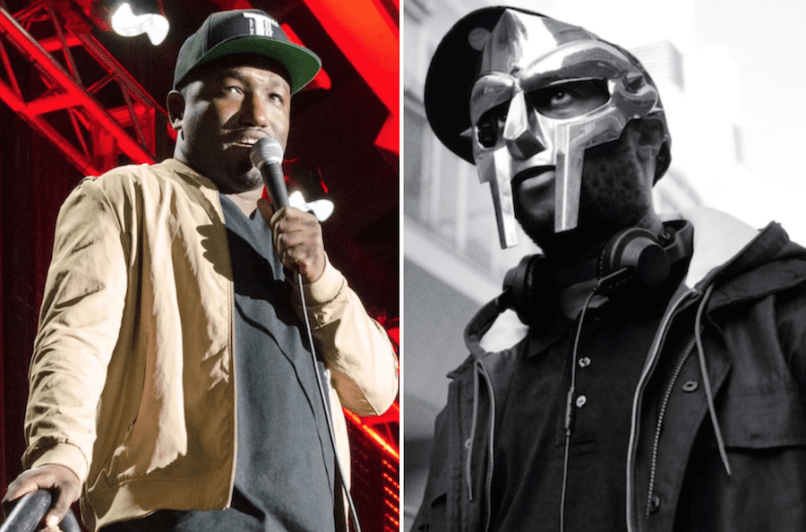 Flying Lotus pulled a fast one over the crowd at Adult Swim Festival this past weekend. During his Captain Murphy set, the producer welcomed hip-hop legend MF Doom onto the stage — only to rip his mask off and reveal it was Hannibal Buress all along.

Setting the trap, FlyLo teased the surprise by yelling to fans, “Y’all know about my man MF Doom, right? I brought my man all the way from London to rap with y’all tonight!” Buress then walked onstage in an MF Doom mask and an oversized coat. He made rapping motions while the Madvillain classic “Accordian” played through the speakers, pantomiming to MF Doom’s vocal track.


Everybody seemed to buy in until Flying Lotus paused his set and walked up to Buress, ripping the mask off his face. “Get the fuck outta here,” he said, laughing. “Hannibal, what are you doing here?”

After he was revealed to be a fake, Buress admitted he couldn’t even pull it off well. “I didn’t know that song really,” he joked, “so I couldn’t even do rap hands that good.” Watch clips of the moment below.

Fans shouldn’t feel that pranked given this is a normal bit. MF Doom is notorious for sending others in his place to events, including at his own performances. When asked by Rolling Stone why he frequently sends stand-ins to replace himself, MF Doom responded simply, “Everything that we do is villain style.”

Besides, Flying Lotus doesn’t need to play someone else’s music when he’s already released so much of his own this year. Back in May, he dropped the excellent Flamagra. The next month, he debuted previously unheard collaborations with Denzel Curry and George Clinton on a Warp radio broadcast. He also dedicated new song “Black Heaven” to the late producer Ras G and guested on Danny Brown’s new album, too. He’s next set to appear at Intersect Las Vegas prior to a short Australia tour, and you can get tickets to all his upcoming shows here.

Actually no it was fucking @hannibalburess 😔 when I tell y’all I was sick 🥺 pic.twitter.com/MbTgcyD2kF

Hannibal tried playing us yesterday pretending to be @MFDOOM pic.twitter.com/3B0c9QH5nf