"This is a mission, not a show," Kanye told the inmates 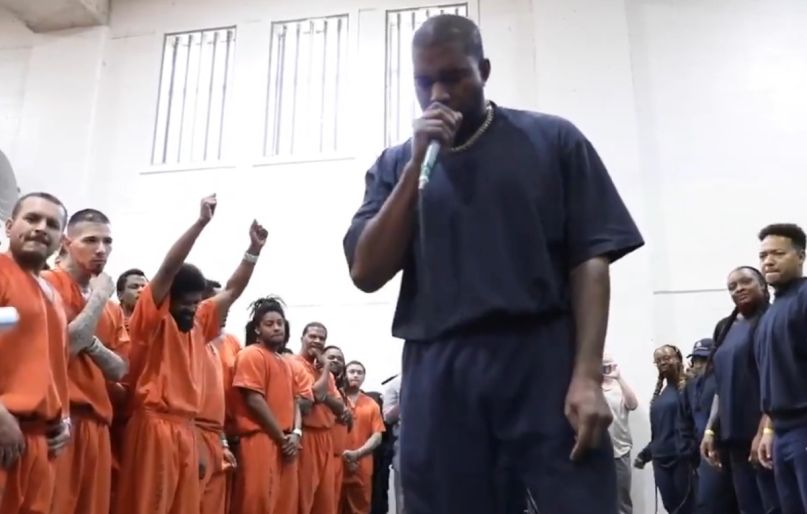 Taking a page from Johnny Cash, Kanye West staged a pair of surprise performances at a Houston jail on Friday.

According to The Houston Chronicle, Kanye and his 200-person Sunday Service gospel choir visited the Harris County Jail on Friday. While there, they performed two separate sets, one for a group of 200 male inmates, and a second for a smaller group of female inmates.

Video released by the Harris County Sheriff’s Office shows Kanye and Sunday Service performing gospel-themed songs from the recently released album Jesus Is King, including “Follow God”. He also dusted off his classic College Dropout track “Jesus Walks”. In addition to performing, Kanye met with the inmates, shaking their hands and telling them “this is a mission, not a show.”

His appearance at the Harris County Jail reportedly came together at the last minute, as Kanye pitched the idea to Sheriff Ed Gonzalez on Wednesday. Kanye also sought to perform at a Texas state prison, but was turned down, the Chronicle reports.

Both Kanye and his wife, Kim Kardashian West, have emerged as strong advocates of criminal justice reform. While in Houston, Kardashian visited death row inmate Rodney Reed and was reportedly with him when he learned Texas’ governor had ordered a stay on his execution.

Kanye and Kim will stick in Houston through the weekend as he’s scheduled to appear at Joel Osteen’s Lakewood Church on Sunday.

How Kanye West transitioned into a new creature is a case study. God is in the business of transforming people into new creatures. This video gave me goose bumps. 🙏🏽 pic.twitter.com/pfW1vuNm3A

@kanyewest visited us today. I know he has a busy weekend in H-Town surrounding his visit to @lakewoodchurch, so appreciate him and his choir spending time with us. #HouNews pic.twitter.com/3e5s92WYY1