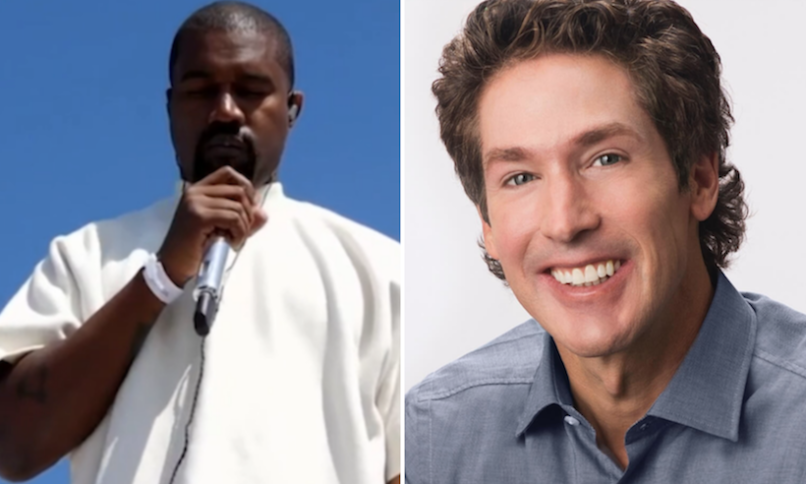 Kanye West the born again Christian is just a version of Kanye West the capitalist rap mogul that attempts to say “Jesus” with sincerity. How else do you explain the $200 Sunday Service sweatshirts, the crappy $55 brunches, or the fact that he credits his $68 million tax return to God instead of politics? So as Kanye continues to use religion to promote his new record (or vice versa?), Jesus Is King, it’s perhaps no surprise that he’s linking up with one of the richest televangelists in the country, Joel Osteen.

According to TMZ, West is scheduled to take part in the 11:00 a.m. service at Osteen’s Lakewood Church in Houston this Sunday, November 17th. He and the pastor will have a “20-30 minute” discussion about how Kanye overcame “significant adversity” in his life to reach his status as a millionaire follower of Christ. What’s more, he’ll have his Sunday Service choir in tow, as they’re scheduled to perform during the evening service.

This will likely be West’s largest Sunday Service audience yet, as Osteen’s congregation tops out at 45,000, with another 10 million tuning in via Sirius XM and telecast. No word yet on if Kenny G will be watching from home or joining West on stage again.

Lakewood is just the latest in a number of church appearances West has made over the last few weeks. His stop at Atlanta’s New Birth Missionary Baptist Church turned into something of a viral sensation when cameras caught T.I. in the audience with a disgusted look on his face. Tip stated he felt “accosted” and “exploited” after guest preacher Bishop I.V. Hilliard reportedly said, “I’m believing for 20 people to give $1,000 today” upon noticing the front pews were filled with wealthy rappers who came at West’s invitation.

We’ve got plenty more religiou$ Kanye ahead of us. In a lengthy interview with Zane Lowe, the man behind some of the greatest music of the last decade revealed he was prepping a Sunday Service album called Jesus Is Born for Christmas.